If you’ve followed the tech world in any shape or form over the last two decades, then it would be almost impossible to have avoided the name Peter Thiel. One of the most successful venture capitalists of our time, a hugely influential power broker, in the last two decades, he’s navigated his way to becoming the godfather of tech bros.

His politics, his ideas permeate everything that Silicon Valley has become today. Thiel is known for playing puppet master with some of the biggest names in tech, from Elon Musk to Mark Zuckerberg.
A shadowy entrepreneur who has aligned himself with the more conservative side of politics, he’s crafted his worldview out of a hyper-libertarian mindset. From seasteading to the apocalypse to space travel to the quest for immortality and even psychedelics. He epitomises everything that Silicon Valley has now become maligned for.

To some, Thiel is the OG troll, malevolent and someone to be very suspicious of; to others, he’s a prophet, someone not afraid to speak his mind no matter what the cost. He envisioned the left eating itself decades ago, the coming Balkanisation of the Democratic Party.

Invariably he’s become one of the most influential and consequential figures in Silicon Valley; some know him as the first investor in Facebook portrayed in the iconic 2010 film The Social Network. Others as the interventionist who helped bring down Gawker in 2016.

If it all sounds a bit Cloak and Daggers to you, then that’s because it is; Chafkin’s biography is an appropriate metaphor for the questionable motives behind Silicon Valley and an indication of where it could be heading.

In this wide-ranging discussion, Chafkin and I examine the power elite of Silicon Valley, Peter Thiel’s shapeshifting ideological worldview. We learn about the tight-knit and, at times, bizarre relationship between Thiel and Elon Musk.
We also learn about Thiel’s prophetic voice on cancel culture and his future plans as a board member for Facebook, now called Meta. 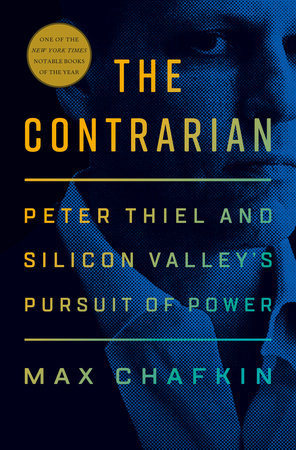 Max Chafkin:The Contrarian:Peter Thiel and Silicon Valley’s Pursuit of Power is out now

'We're 10 years into this mass hypnosis.'