2016 has been a bizarre year in which the unlikely and unpredictable seems to have become the new normal. But this has also meant that at 52 Insights we’ve had some of our most fascinating conversations with people offering unique perspectives on this extraordinary reality we find ourselves in.

As the year finally draws to a close we’re taking a look back on some of our favourite interviews from the last 12 months. We’ve had discussions on everything from philosophy, technology, art, and of course politics. 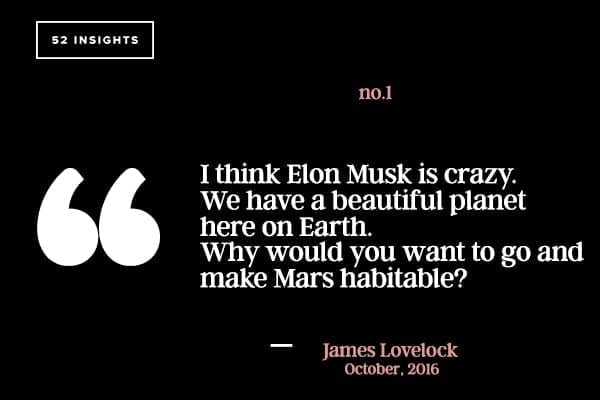 James Lovelock is an environmental pioneer as well as a celebrated troublemaker. Known for his roguish views, even at 97 this almost centenarian continues to stand his ground on his controversial Gaia theory.

2. “I grew up in world where I imagined that technology would be so freeing and then I started realising how it’s used as a tool for all sorts of political agendas.” – danah boyd

Social media scholar danah boyd shone a revealing light on our society in this discussion about the rapid rise of the internet and how such a hopeful tool of connection and communication has often been manipulated. Her words were echoed by media theorist Douglas Rushkoff who lamented the fact that “We’re not in a place where the people have the same access to tools and technology as the masters.” Boyd also spends much of her time researching the way in which young people interact online and left us with plenty to think about. 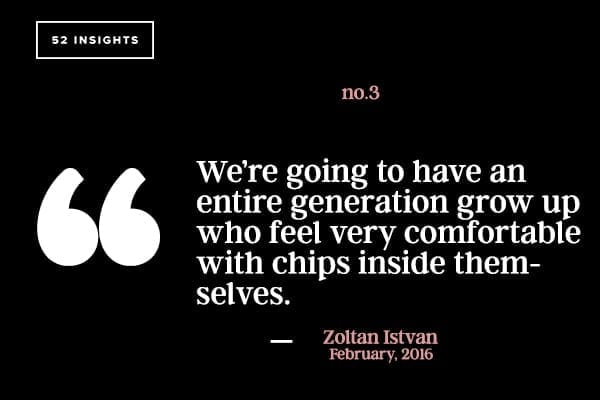 Did you know that Donald Trump wasn’t the only outsider candidate with outlandish goals running for President this year? Zoltan Istvan was representing the Transhumanist party with the hope of encouraging Americans to embrace the rapid advancement of technology and science that will help humans to bring an end to the ageing process. We spoke to him back in February and couldn’t help but admire his vision.

You might think a name as big as Daniel Libeskind would be accompanied by an ego with a size to match. On the contrary, the Polish-born architect, who is responsible for some of the most remarkable builds in recent history including the Jewish museum in Berlin, is one of the most down to earth interviewees we’ve featured. He is a man so in touch with his humble roots that he could even be accused of being a social justice warrior. As an architect he is fascinated by the deep history of the sites he works on, and is passionate about incorporating that history into his work.

5. “If you take a bit of space and get rid of all the particles and radiation you’ll find it weighs something, and we don’t have the slightest understanding why.”  – Lawrence Krauss

We walked away from our interview with Cosmologist Lawrence Krauss with our minds well and truly blown. This fascinating discussion tackles the many mysteries of our universe as well as his passionate battle against organised religion. 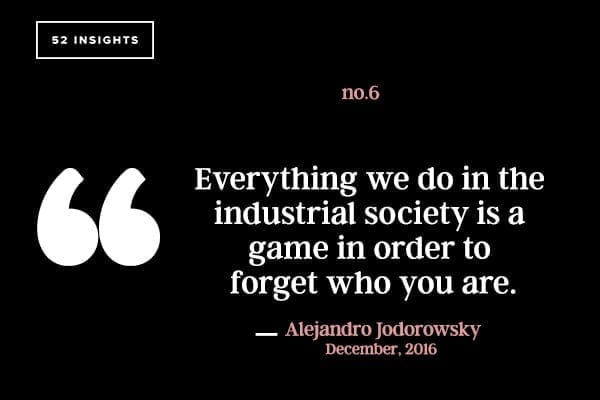 One of our most enlightening encounters this year was with eccentric filmmaker and artist Alejandro Jodorowsky. There was no time for small talk as the 87-year-old legend of cinema jumped head-first in his broken English into the biggest existential questions that consume him.

7. “It’s your ability to deal with a lot of pain that makes the difference, and some people are better at suffering than others.”  – Scott Jurek

The endurance runner who has single-handedly defied all the odds, breaking records at every turn, once that included completing the length of the Appalachian trail over 2000 miles in just over 40 days.

8. “We are entering a new age of warfare and we don’t fully comprehend it.” – Kim Zetter

In October we sat down with journalist and author Kim Zetter to discuss the shadowy topic of cyberwarfare. She talked us through the very real threats faced as global conflict moves from the battlefield to cyberspace. Her book Countdown to Zero Day is a chilling investigation of the world’s first “digital nuke.”

9.  “Now for the first time we are on the verge of creating an inorganic life form. The context to understanding the meaning of this development is not 10 years or 100 years, its 4 billion years.” – Yuval Noah Harari

A prominent voice of 2016, Yuval Noah Harari’s bestseller Sapiens launched the Israeli academic’s brilliant insights into the mainstream. This year he cemented his place as a leading thinker with the prophetic Homo Deus: A Brief History of Tomorrow. In this book and our interview he speaks of the many consequences that will arise as a result of humans creating artificial intelligence.

British novelist Tom McCarthy is a dangerous combination of intellectual and artist. There’s a layer of wit and sardonicism to almost everything he says and we couldn’t resist including this quote here.

11. “It’s an open question whether a service as ours leads to a global homogenization.” – Evan Sharp

We talked to Evan Sharp, the co-founder of one of the most ubiquitous internet platforms Pinterest back in September. This was a discussion which traced the roots of a quiet, mild mannered individual who has managed to reshape the way we consume and make visual decisions.

12. “Donald Trump’s message to people is very simple, ‘your life is hard, your prospects are poor, and it’s all because of someone else. Your condition is because of Mexicans, Muslims and Chinese people. I will beat them up and you will feel restored.’ That message is hauntingly familiar.” – Fareed Zakaria

This wouldn’t be a year of quotes without mentioning Times Magazine’s person of the year. Fareed Zakaria didn’t hold back his views of the next President of the United States, and as we creep closer to the day that Trump is given the keys to the White House, these words appear ever more ominous.

13. “Politics can only do so much damage; it has damaged a lot, but not everything.” – Parag Khanna

International relations expert Parag Khanna left us feeling surprisingly hopeful for the future. He talked to us about his latest book Connectography which reminds us that despite walls and borders, we’re globally more connected than ever. We couldn’t help but find his optimism contagious.

14.  “Austerity is an economic cleansing, and I mean that in the same sense as an ethnic cleansing.” – Saskia Sassen

In the wake of the Brexit vote this summer, we held an event at London’s Second Home to ask, is globalisation tearing us apart? Legendary sociologist kept the audience captivated with her unique insight and compelling arguments.