Companies like Adidas have taken the bold and innovative step of using recycled waste to make sneakers for a global launch this month. Last year the company unveiled a basic prototype of the shoe made from 3D-printed recycled ocean waste. The shoe has now materialsed, made in collaboration with Parley For The Oceans a collaborative forum to raise awareness for the environment.
In a press statement Adidas exec Eric Liedtke said, “We will make one million pairs of shoes using Parley Ocean Plastic in 2017 – and our ultimate ambition is to eliminate virgin plastic from our supply chain,”

Cyrill Gutsch, the founder of Parley for the Oceans, added: “Nobody can save the oceans alone. Each of us can play a role in the solution. It’s in the hands of the creative industries to reinvent faulty materials, products, and business models. The consumer can boost the demand for change.” 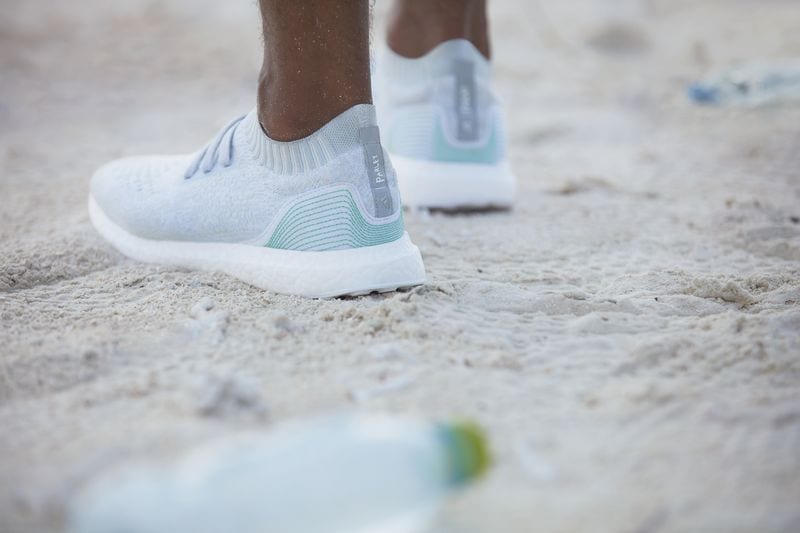 The actual shoe consists of 95% recycled plastic harvested from around the Maldives. So in essence the shoe contains 11 plastic bottles.The company plan to roll out just 7,000 pairs, but by the end of 2017 will release 1 million pairs of the sports shoes.  Giant sports teams Real Madrid and FC Bayern Munich have also integrated the eco-wear into their uniforms.
5.25 trillion pieces of plastic debris is now awash in the ocean, and of that mass, 269,000 tons float on the surface. So it’s good to see companies such as Adidas beginning to finally take a stand against ocean waste.
The shoe is called the the UltraBoost Uncaged Parley. You can buy them at the end of month for €200 and sign up here for it if you’re an environmentally aware sneaker freak.
Back to News