When Galileo first gazed out at the stars at night he probably asked the same questions we’re asking even today. Are we alone? What makes up our solar system? What other celestial bodies are out there? Questions that have kept humanity up at night for thousands of years.

In 1977 NASA attempted to answer some of these questions by launching the most ambitious piece of technology humankind had ever seen, Voyager I.  A space probe representing all the curiosity and exploratory desires we possess as a civilization. 40 years later those two machines Voyager I and II are still out there, floating idly sneaking into interstellar space surveying the cosmos looking for planets and obscure objects that surround us and painting a picture of who we are.
Emer Reynolds, an Irish documentarian spent the last few years getting access to the scientists that helped launch Voyager I. As you can see they put their heart and soul into this endeavor. What’s remarkable is not just what it taught us, what’s even more remarkable is the story behind it and the fact that it almost didn’t make it.

The first time I heard about Voyager I was actually was around two years ago. One of the first people we interviewed was a guy called Eric Wernquist, the Swedish illustrator-animator, and he did this short film called Wanderers.

Yes, I saw it, really beautiful.

Yes, it did go very quiet from about 1990 to 2013. It was just chugging along and then all of a sudden someone would ask, “Oh, where’s Voyager gone?” and it’s still out there, it still hasn’t reached the edge. So it’s jumped back into our consciousness over the last few years and of course, it’s the 40-year anniversary of the launch this year as well, so we are much more aware. But Wanderers did a great job of reminding us of the story and modernising it as well. 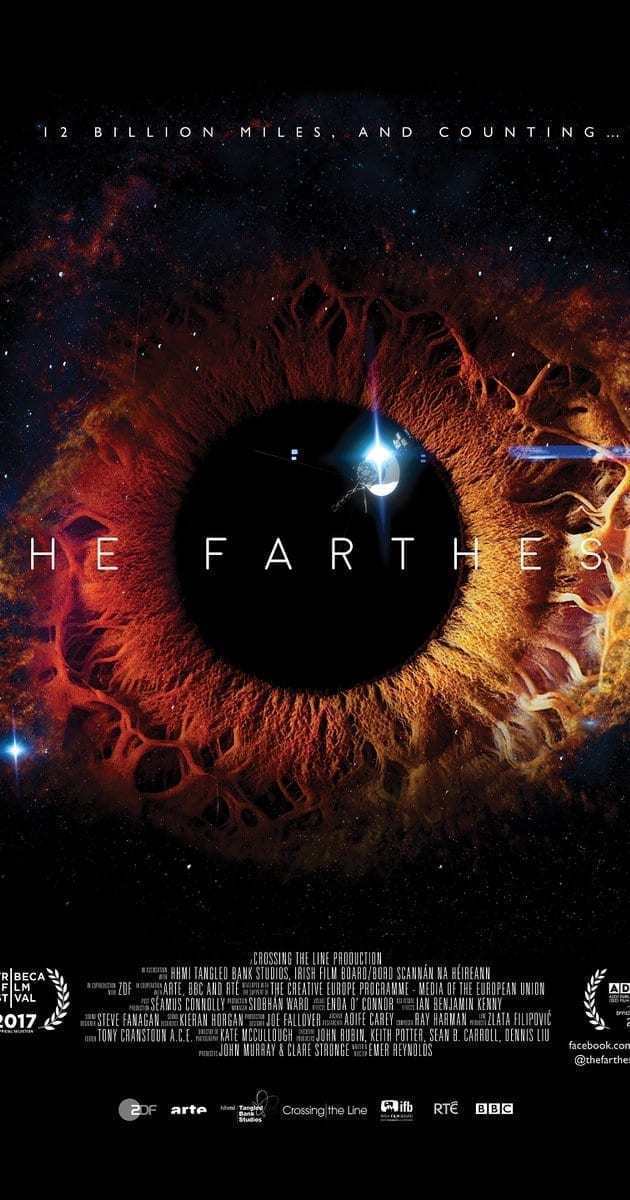 Voyager has a really bizarre story, I find.  It is so outside of our human condition to create something and then just let it go without knowing what the purpose of it being out there is. That was what I took from the documentary.

You mean the fact that we would create something, let it go and not know where it would end up and eventually finish its life?

“There was only enough room for 90 minutes of music and around 100 images to go on the record. So they really had to curate a version of life on earth that they felt would represent them.”

Yeah, the whole thing feels beautiful but aimless in a way.

It seems directionless in some ways, in its early life it had very clear goals to look at these four planets up close and it knocked it out the park in terms of its achievements and what it was doing there. But they knew at some point, and that’s the fate of all spacecraft, that as it headed out into the solar system it was eventually going to leave our solar system behind and circle the galaxy for all time. So that’s a little bit aimless in itself, the fact that there is no end in sight and no end to the story – it’s a one-way journey.

I’ve never seen a scientist cry, so that was kind of incredible to see, this outpouring of emotion over the project.  What would you say was the most amazing thing you found in documenting the Voyager story, because I can’t imagine that a lot of people have had such access to the story?

That, in a sense, was the most amazing thing for me. I love science and scientists but we think of it as being observable facts and presenting facts as they appear, not having too much of a spin. But to unearth this well of emotion in the scientists and engineers that I discovered, that was a huge shock and a huge thrill. And to find their connection to the mission, the craft and the idea essential discovery – you were talking about it being aimless – just pure curiosity and discovery, to find how devoted, enthusiastic and inspired they are by discovering what humans are capable of. That was a huge thrill and so humbling and exciting because it was clear then that we could really make this film that was in that space between science and art, or between science and heart; the fact that you can talk at a level about feelings about how it was to build this craft, to dream up this adventure and have the audacity to actually pull it off. 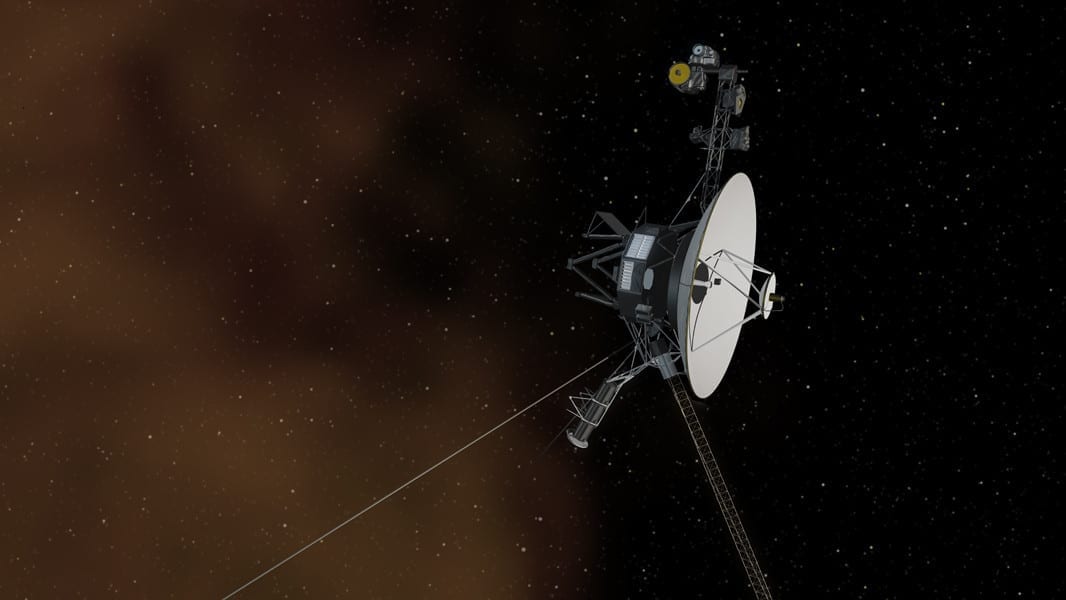 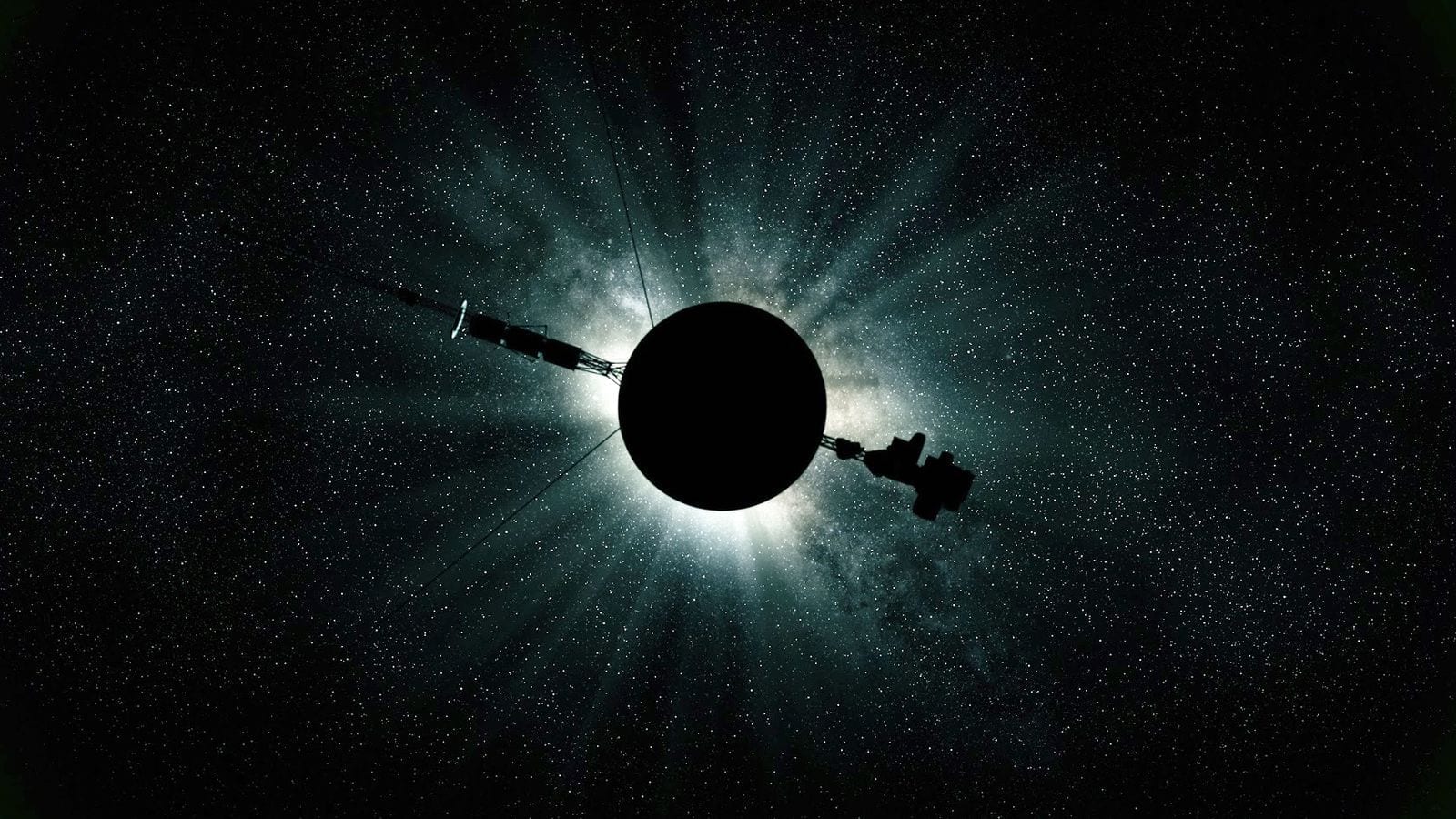 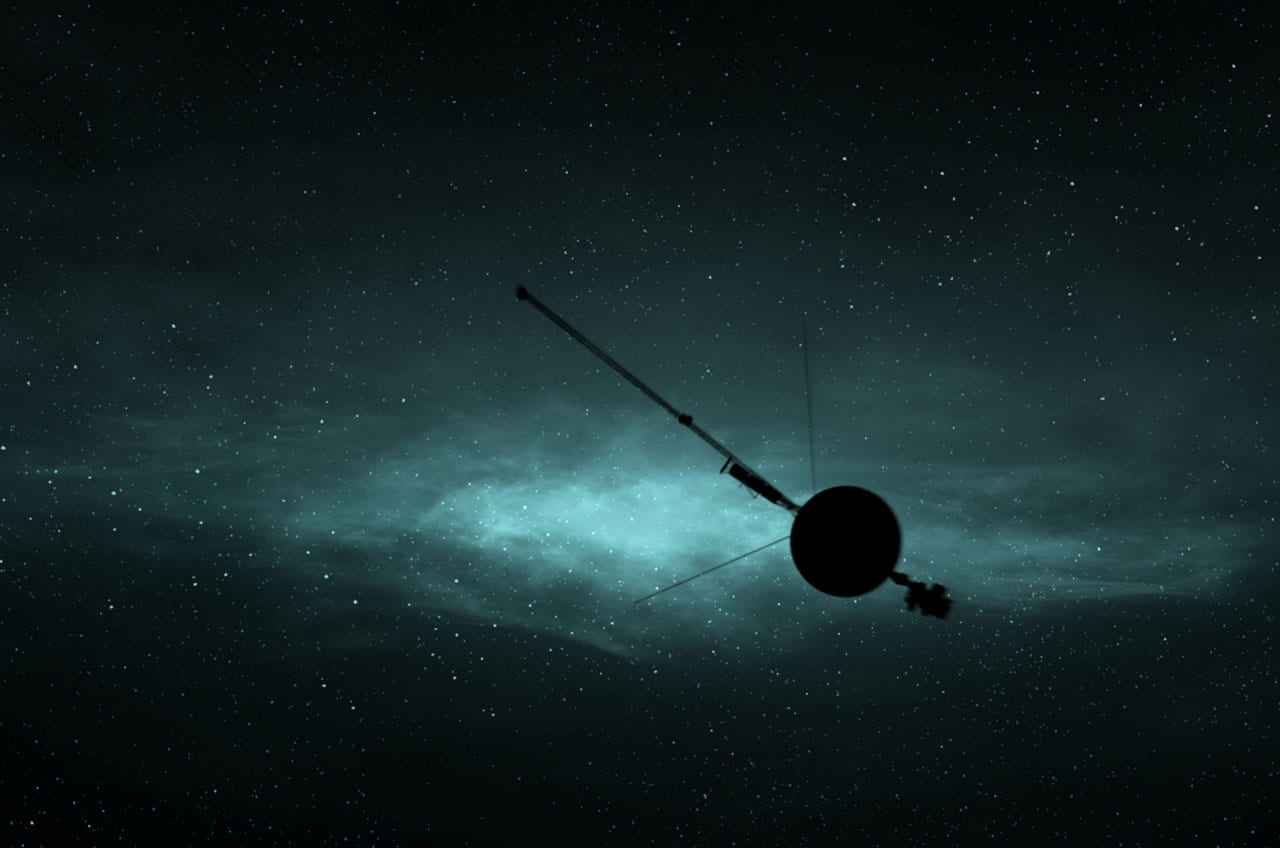 Voyager I floating through space

The whole thing is stuck between fantasy and science fiction mostly. Where are they now?

Voyager 1 is in interstellar space, Voyager 2 hasn’t reached it yet. Both have got a number of instruments still working and are actually out there testing parts of space and the galaxy that we’ve never been to before, so on a very practical level they are making measurements in an area of space, the interstellar medium, that we have never had measurements of before. What they’ll be registering, it’s above my pay grade in terms of science, but the galactic plasma, the density and the heat of this medium, cosmic waves… so they are still investigating on our behalf for another 5 to 10 years. After that, yes, we will lose contact and their instruments won’t work anymore, they will just be floating around, humbly carrying these little remnants of our existence just in case they ever bump into anything. It’s a poignant end to a craft that has really excelled in scientific discovery so far.

“Eventually we will lose contact and their instruments won’t work anymore, they will just be floating around, humbly carrying these little remnants of our existence.“

Let’s talk about the actual record itself. I was fascinated by the fact that the Beatles said no to having their record licensed on this interstellar space journey. Pulling together this record is such a bizarre undertaking – how do you encapsulate humanity and its history in one record?

It is exactly how you describe it, like you and me digging a little hole in our garden and burying a box filled with essays and other remnants of our lives. It’s such a mad, mind-bending adventure – how would you represent humanity and life on earth to a distant alien? What would you say about us? In the film they talk a lot about the fact that possibly it was even more about sending a message to ourselves than to life in outer space – we were talking to life on earth about how we see ourselves. I see the spacecraft, with its Golden Record, with two sides to it: there is this great desire to know, which is what Voyager, the scientific spacecraft, is trying to find out, and then there is the desire to be known, which is what the Golden Record is trying to do, to say to future aliens that we were here, we existed.

I just think it’s such a romantic idea that this small team of people, in such a small space of time and with very limited resources – there was only enough room for 90 minutes of music and around 100 images to go on the record. So they really had to curate a version of life on earth that they felt would represent them. In a radical quirk, I suppose because this was in the 1970s where they didn’t have X Factor and everything else, it wasn’t crowd funded or voted in by the public what music or images would be chosen. This team actually did it themselves, and they may have got it wrong – there’s no Bowie, Bob Dylan or Beatles on the record – there’s no Elvis for Christ’s sake so I think they got it wildly wrong, but they had the courage to kind of nail their colours, which I think is wonderful. If we did it now we would probably send a key drive with hundreds of thousands of records, with everyone from every country around the world voting for what was on there, representing all the different cultures and ticking boxes in terms of diversity. I love the idea that it’s a curated piece. 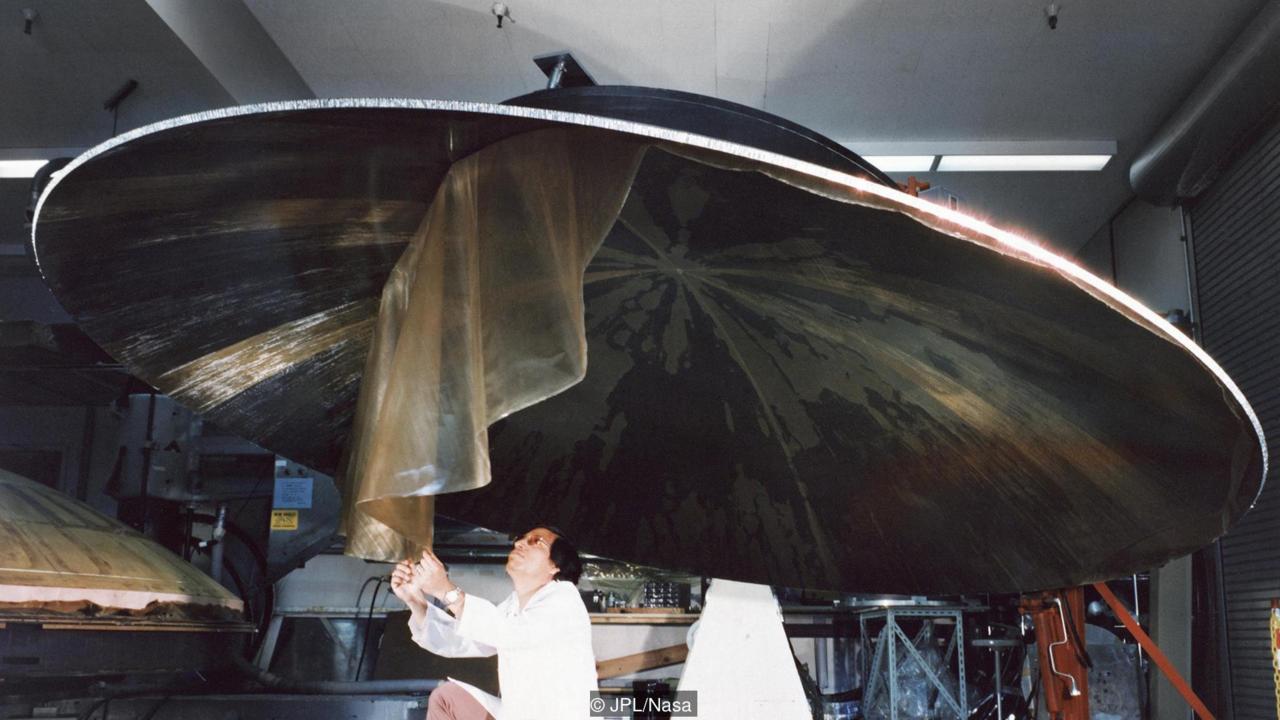 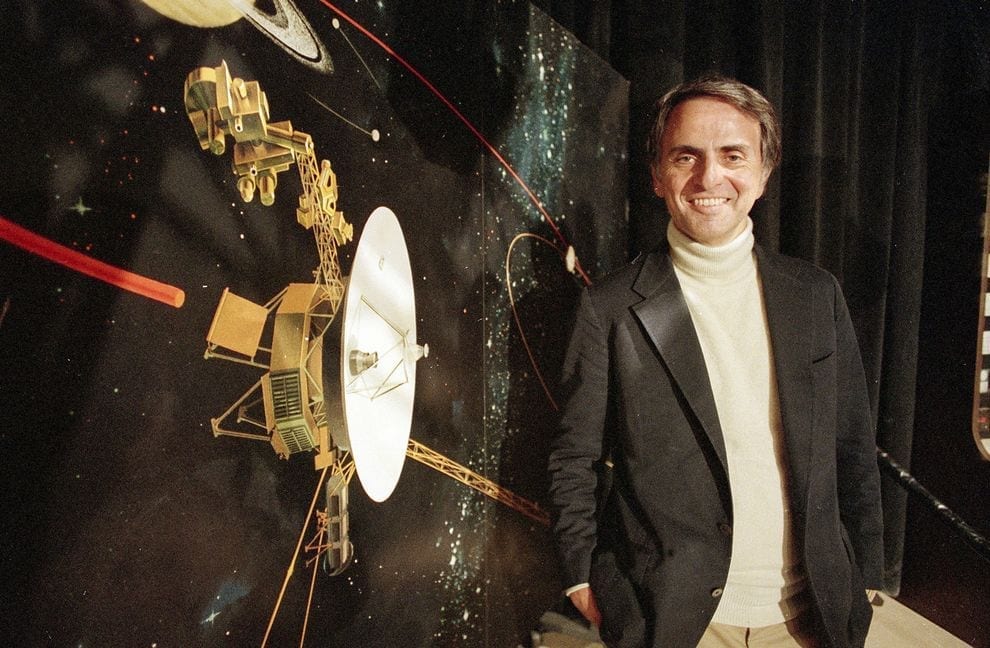 I think what amazed me most about it was that this Voyager, this machine that was quite outdated when compared to today’s technology, just flew through the solar system, swinging past planets and having these near misses.

I know, and I do kind of agree with you. They tell me with great authority that they can map both Voyagers trajectories for the next 200 million years and know what absolute certainty that it won’t run into something, and I’m like you thinking, “They can’t know that”. It’s counterintuitive.

Did Voyager really encounter anything that we had absolutely no idea about and that changed the way that we think about the Universe?

We discovered 11 new moons around Uranus and multiple others at Saturn. But there wasn’t exactly something coming out of nowhere that we didn’t know about as you were saying. The moons were probably predicted and then identified. But that being said, when the Voyager was launched in 1977, we actually believed from that point in time (which is hard to know now looking back on it), that all the satellites around all the planets would be dull, boring icy rocks like our moon with no distinguishing features.
They had no reason to suspect anything other than that, but when they got to Jupiter they found Europa with its icy crust and probably an ocean of salty water underneath it, and they had no idea that was there. Io, another of Jupiter’s moons, had volcanoes because it is being flexed by the gravity of Jupiter. They were brand new ideas that are normal to us now because we know that there is this massive diversity in our solar system and probably all solar systems. But at that point that was absolutely brand new thinking.

The Farthest is out now in selected cinemas.