In what became one of the most surprising referendums in history, the decision for Britain to leave the EU has had tumultuous effects on the local economy. In a new report by Swiss bank Credit Suisse shows that since Brexit took place, the UK economy saw $1.5 trillion wiped from its households with income falling by $33,000 from the previous year. The report shows that $14tn of private wealth is held by 49 million adults and of this 5% of this overall figure was subtracted. Which subsequently saw a 15% decline in millionaires in Britain.

The Credit Suisse report said, “The United Kingdom had a tumultuous end to 2015 – 2016, with sharp declines in the [foreign] exchange rate and the stock market following the vote to leave the EU in the June 23 referendum. Nevertheless, as of the end of June, wealth per adult in pounds sterling was 6% above its level a year earlier. The stock market recovered later, but the outlook is very uncertain, both for the economy and household wealth.”

It looks as though the US has recovered somewhat since the disastrous downturn from 2008, seeing its eighth successive year of rising wealth, boasting an average net wealth per household of $344,700.

The big surprise has been China, since 2000, the country has grown 11% of its economy, in five years time its predicted will leapfrog to where America was in the 90s. 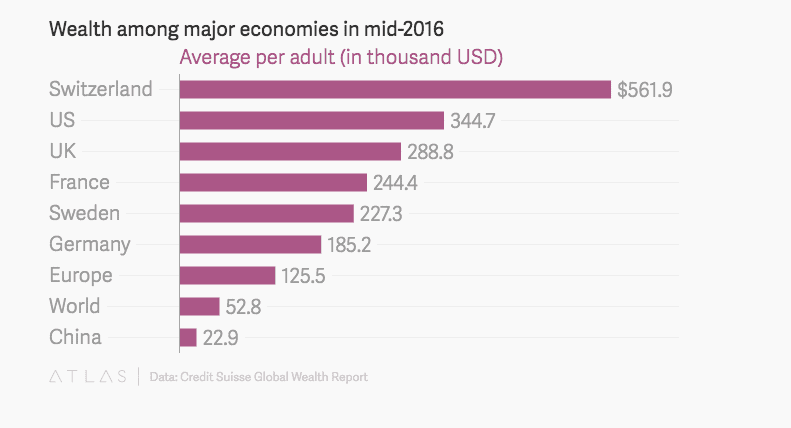