We all like to think our brains are amazing. Sure, our bodies may not be perfect, but at least our brains remain the immaculate all-powerful seat of consciousness that drives all human endeavour.

It would be nice if that were true. Unfortunately, it isn’t. Our brains, impressive as they are, can be just as messy, convoluted and inefficient as any other part of our body. Suffice to say, the brain has many flaws. So how do we prevent these flaws from affecting what we think and do? The answer is very simple; we don’t.

The brain’s tendencies and quirks are actually a big part of everyone’s daily lives, and can manifest in some very bizarre ways. For example, the brain doesn’t like uncertainty. Anything uncertain can’t be anticipated and controlled, so it’s a source of potential danger, according to our brain’s primitive-but-effective threat detection systems.

This is made worse because the brain also has a lot of information to deal with, and on a constant basis. As well as the constant bombardment from our senses, there’s all the stuff we think about or stress about or anticipate or predict. This is a copious amount to process. So our brain has, luckily, evolved a number of shortcuts and quick-fixes when it comes to what’s important.

It’s a bit more complex in truth, but one trick the brain employs is to look for and spot patterns in what we’re observing or experiencing. From basic senses to complex cognitive extrapolation, anything that’s linked can be figured out and may be important. If all the shadows in that patch of long grass move together, it might be a tiger. If every time you eat the red berries from that bush you end up vomiting copiously, they might be poisonous. So you can see why this pattern-spotting would be an advantage.

It causes problems, however, when we spot patterns that aren’t really there, and only arise due to coincidence. Our big bulky brains mean we have the ability to deduce and extrapolate and imagine, so working out patterns in things is even easier and therefore more common. As a result we get way more false-positives than we should. Spotting patterns that aren’t there is known as apophenia. And it may well be what has given us many modern superstitions, as well as conspiracy theories.

Superstitions are unusual in that they involve humans believing they can exert control over events via methods that make no logical sense at all. Walking around ladders or throwing salt over your shoulder, these can’t possibly affect your good fortune, but people believe they do. No doubt at some point in the less-rational past somebody coincidentally experienced good luck after doing these things and it spread from there.

Conspiracy theories are similar; two unconnected events with similar features can be linked together by someone trying to find evidence of shadowy forces at work. If someone critical of a government dies of natural causes, there may be nothing suspicious about it. But it’s no great leap to conclude ‘assassination’ as a factor.

Another possible link between conspiracy theories and superstitions; they suggest that the world is or can be controlled in some way. It may be shadowy forces or inexplicable magic, but it still removes some of the uncertainty from what looks like an uncaring and random universe. Some might feel it’s better to have a drunk pilot at the helm than none at all.

Or maybe I’m just seeing connections between these things that aren’t really there. 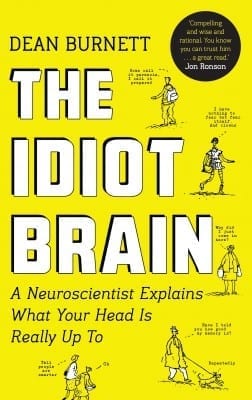 The Idiot Brain by Dean Burnett is out now (Guardian Faber, £12.99)
Back to News