In the wake of June’s shocking Brexit vote a swathe of headlines appeared in every major publication from the Telegraph to the Washington Post and India Times, pronouncing ‘the death of globalisation.’

“de-globalization, a sort of diminishing inter-dependence among different nations has arrived.” Wrote John Eger of the Huffington Post. There’s a growing fear that Britain’s exit from the EU, along with the financial crisis of 2008, rising inequality, and the ongoing immigration crisis, could deal the fatal blow to this previously accepted concept of globalisation.

But how much of this talk is hyperbole? Has globalisation acted as a force for good in the world? Or is it a demise we should welcome?

We sat down with experts, sociologist Saskia Sassen and political economist Philip LeGrain, with the aim of coming to understand globalisation’s relationship with capitalism and where our world might be headed in the near future. We wanted to gauge their feelings on the shift away from globalisation in the West, towards more radical politics and ideas.

Saskia Sassen, what is globalisation for you?

SS: Well globalisation is a vague term we use to describe a set of new logics, or, more simply, arrangements where new actors gain power, including the power to shape new narratives about what is good for a society, that is one way of putting it. There are also counter movements to power, such as the fact that many weak actors and initiatives with social justice as their aim can also aggregate their weak power and make a difference.

Do you think that globalisation inherently loves a good crisis, it forms a strong part of its narrative?

SS: Certainly in the case of finance. Any radical restructuring can benefit from calling itself a “crisis.” It camouflages the fact that particular actors may well be pushing the “crisis” in order to implement very different structures. I have made this argument before, where the highly indebted countries could be subordinated to the authority of IMF and World Bank rules. I have long argued that every crisis is an opportunity for finance to exercise its extractive logic.

Are there particular state actors who are potentially to blame other than the complex instruments and landscapes financially which you have alluded to in this inequality battle?

SS: Sure, governments which are too easily persuaded by the arguments of the big powerful corporations and financial firms; legislators who do not do their homework, and instead of a critical examination of what is good and what is really bad about finance, accept the narrative of the financial system itself.

Is the rise of populism a sign of a world that is moving too fast or a response to something else more sinister?

SS: Generally populism is, in my view, a function of the failure of the political classes to enable the average resident of a country to understand what is actually happening, such as the growing concentration of wealth at the top—the fact it has been enabled by governments and politicians, and by the lies of corporate and financial powerful leaders. . .

Philippe Legrain,  how do you feel about the idea that globalisation is on its back heels? Judging from your work it seems you’re an advocate of globalisation, open borders and looser regulations. Would I be correct in saying that?

PL: Broadly speaking I guess so. It’s true that there is a growing backlash against globalisation in its many forms in the Western world, but not in emerging economies where the benefits of globalisation are obvious and sustained, where we’ve seen the fastest fall in poverty in human history, and China has gone basically from subsistence in the 70s to being a high middle income country, and so on. But certainly in the United States and in Europe there is a backlash against trade and against immigration, and a general shift in politics towards wanting to close borders and reduce international interactions.

The Brexit vote is kind of more complicated than just simply a backlash against globalisation. It was led for the most part by conservative politicians who actually advocate greater free trade and greater de-regulation, and therefore not at all stepping back from globalisation but actually engaging more. At the same time they did a sort of act with the devil where they decided that the way to win the referendum was to appeal to people’s hostility about immigration. Given that there’s an overlap between conservatives that like free trade but don’t like foreigners, and working class voters who blame foreigners for their personal misfortune and everything they dislike about the way the country has changed, that unholy alliance sort of works. But the people that voted leave on the basis that this is somehow going to make their economic and social position better, and somehow protect them more from the world economy, are likely to be disappointed. 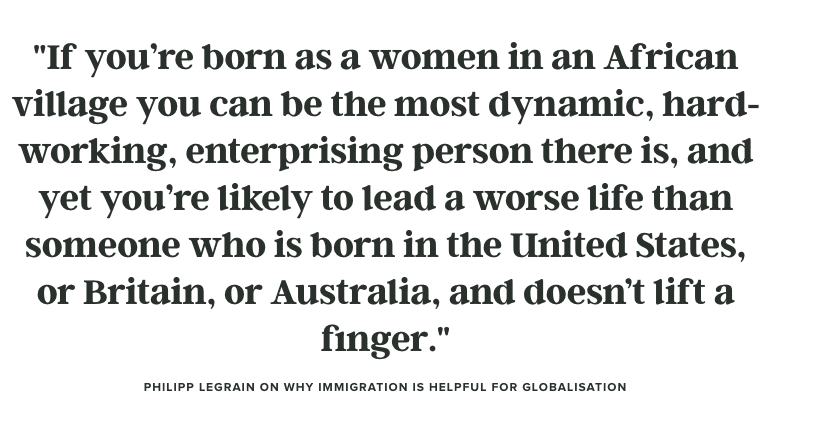 During your work with the Eurozone crisis you made several strong statements, one calling it a “debtor’s prison”.

PL: The reason why the Eurozone is a glorified debtor’s prison is because of a series of wrong political decisions rather than due to global interactions. Yes it is true that the reason Greece got into the mess that it’s in was that its government was able to borrow cheaply from foreign banks. Had politicians not intervened when it was clear that Greece could not pay back its debts, it would have defaulted and those banks would have suffered losses. Instead (and this is not due to globalisation but due to government intervention) Germany and other governments stepped in and said, no it is inconceivable for French and German and other banks to suffer losses, we’re going to lend money to Greece. As a result that money is now owed to German and French European tax payers. So yes, in a sense the conditions for this mess were caused by the ability of Greece to borrow freely from foreign banks, but ultimately the bad decision came later and that was the intervention by the Eurozone government in favour of their banks.

You’re very pro-immigration. You have this think tank ‘Open’which studies the contribution of refugees. How do you feel that immigration creates a more positive narrative for globalisation and the economy?

PL: The key factor that determines people’s life chances is where they were born. So if you’re born as a women in an African village you can be the most dynamic, hard-working, enterprising person there is, and yet you’re likely to lead a worse life than someone who is born in the United States, or Britain, or Australia, and doesn’t lift a finger. One way in which we can change that is for people to migrate. That doesn’t just transform the life chances of the person who moves, it’s a win-win because the country to which they move tends to benefit as well. For me it is an essential part of globalisation morally and economically.