About every two weeks, the !Kung San – a traditional people of Southern Africa – gather for a festive trance dance. Women sit about a large central fire joyfully clapping in sharp staccato, voices soaring. Men dance around them, feet pounding in counter-pulse to the singing. As the hours pass, the dancing intensifies. Shamans fall into !kai – a deep trance state – and break off from the line of dancers. Oblivious to pain, they rub glowing-hot coals on their chests and stomachs. They lay hands on and impart n/um – healing power – to those gathered around the fires. The dancing, trancing, and healing goes on all night. 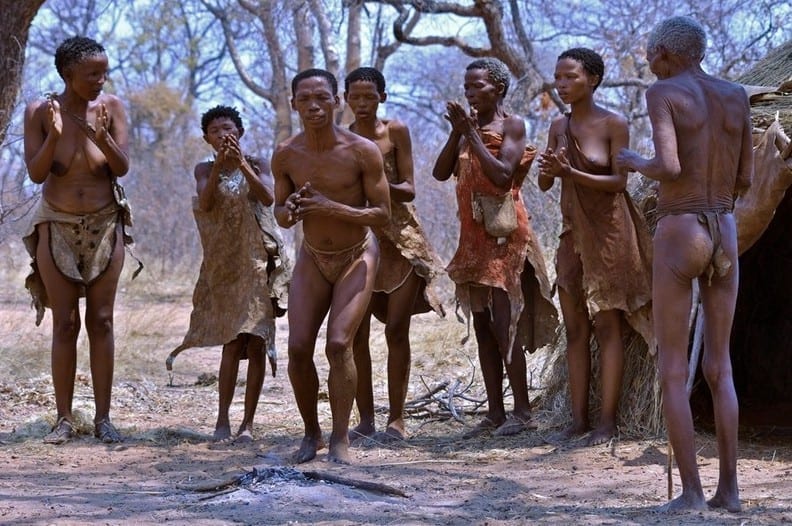 Anyone dismissing the trance dance as merely an eccentric, slightly embarrassing relic of our superstitious past risks failing to appreciate the deepest roots of our humanity. Before we had language, religion, or myths, we had ritual celebrations around roaring fires. We are the ritual species.

What defines us as humans? Typically, the answer has been rationality. We have reason and other species don’t. Recent research, however, by people such as psychologist Michael Tomasello at the Max Planck Institute in Germany and anthropologist Robin Dunbar at Oxford defines humanity socially. What makes us human is our unparalleled potential for social cooperation. Nothing on earth works together to achieve shared goals like humans. Have two kids pull a rope to obtain a treat and what happens? They share the treat. Repeat with chimpanzees and what happens? The dominant chimp monopolizes the reward and cooperation ends. Now expand the cooperative scenario – from kids working together to get candies, to hunters jointly bringing down big game, to Roman engineers and architects building aqueducts, to NASA launching space shuttles – and you have the human cooperative difference.

But how is cooperation built? Throughout the natural world ritualized behaviors regulate social life. How does one dog tell another that she wants to play, not fight? She uses the famous canine ‘play bow,’ putting her rear end in the air with tail wagging and her head to the ground between her front paws. Male baboons use an even more distinctive ritual for building cooperative social bonds. They exchange quick scrotum grasps. What better way to say ‘I trust you’ than to put your reproductive success into another’s hands! But animal trust-building and social bonding rituals have limits. Their cooperation is stymied by equally competitive tendencies. Somehow our ancestors surmounted this competitive barrier such that trust and cooperation became our default setting. The !Kung show us how.

Absent among the innumerable animal rituals are any involving synchronized group movements. Put simply, animals don’t dance. By contrast, dancing, chanting, and singing are human universals, especially so among traditional societies. Furthermore, studies have shown that moving together is a potent mechanism of social bonding. For example, psychologists Scott Wiltermuth and Chip Heath found that when they had people marched or sing together they were significantly more cooperative and trusting with one another compared to those who marched or sang individually. Indeed, historian William McNeill argued decades ago that soldiers must march together before they would be willing to die together.

The emotional power of synchronized movement was something our ancestors discovered hundreds of thousands of years ago. They had little choice. Weak, slow, hairless, and without sharp claws or menacing canines, our ancestors were no match – mano on mano – for the competition. But together we could conquer the globe. Working together required trust; and trust required an unprecedented depth of inter-personal emotional commitment. Our ancestors built that trust using an ancient mechanism (ritual) in a novel way (dance); and we are they’re legacy.