If you want to understand the world better, you just have to look at the emerging field of Dataviz. It’s porn for data geeks but just as exciting for anyone curious enough about what’s going on. This new field allows people a portal of sorts to comprehend complex issues. You’ve seen the magnificently pretty infographs, with rich colours, neat shapes and images, all packaged for your consumption. We have to admit we cannot get enough of it.
This year the Kantar Information Is Beautiful Awards took place and we chatted with the founders to find out why this new field is a real game changer and who the standouts were this year.

What is the idea behind these awards?

The Information is Beautiful Awards were set up to celebrate the very best in data visualization, infographics & interactives at a time when these disciplines are becoming ever more important. We try to shed light on the entire community of designers, coders, data journalists, researchers and data artists who work in this space. It’s open to everyone from students and individual practitioners all the way up to established agencies – or publishers like the Washington Post and Buzzfeed. After five years we can see that several of our winners have gone on to greater successes, including having books published, growing their own studios, getting investment or being invited to work with big brands. With a judging panel made of over 30 dataviz names, plus a public vote from members of the community, we feel it’s the perfect balance between expertise and accessibility. 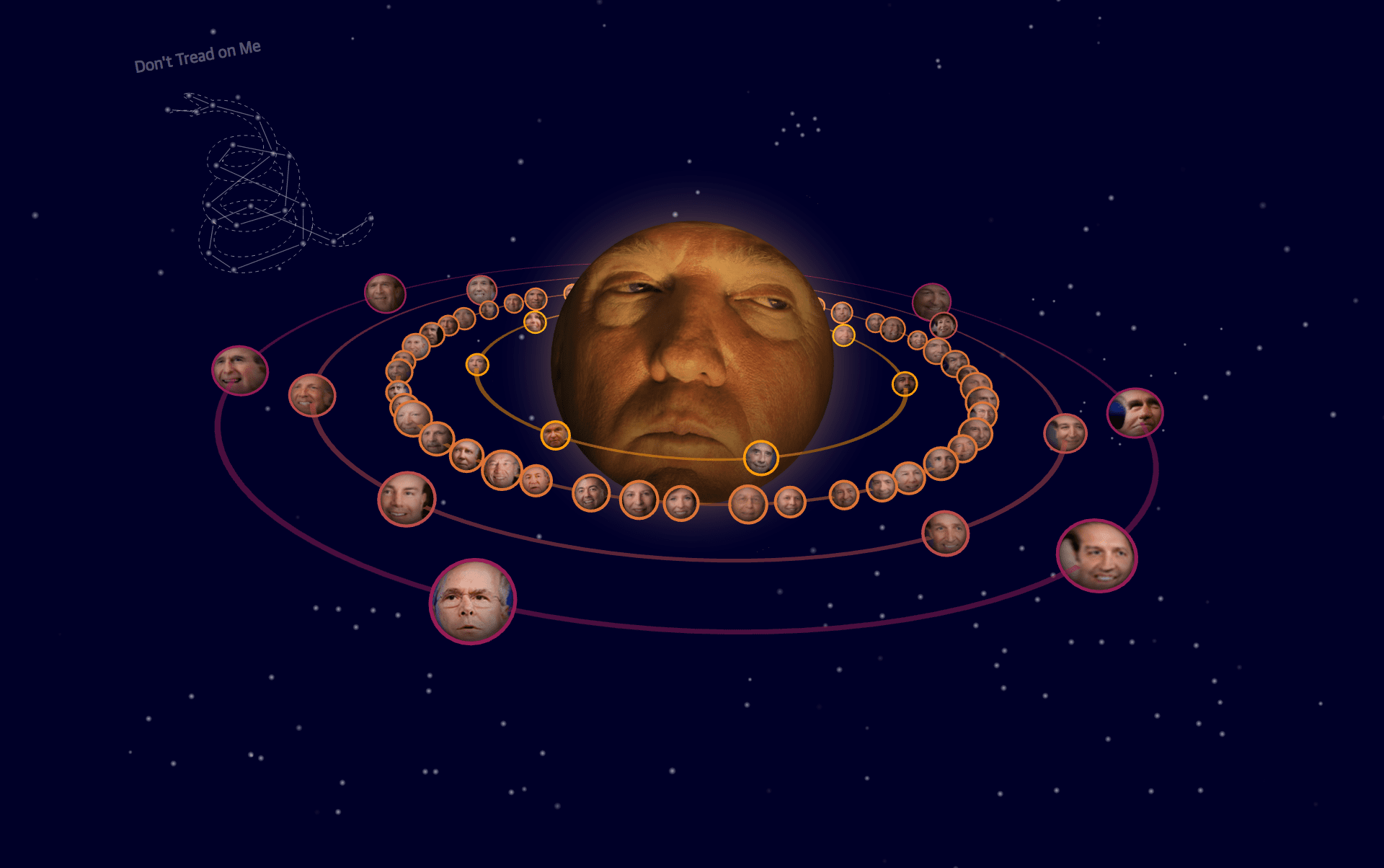 Republican Center of Gravity: Created by The Guardian, it looks  at the universe of positions on Donald Trump. See which politicians have been sucked into orbit by the gas giant and which ones are resisting the pull. 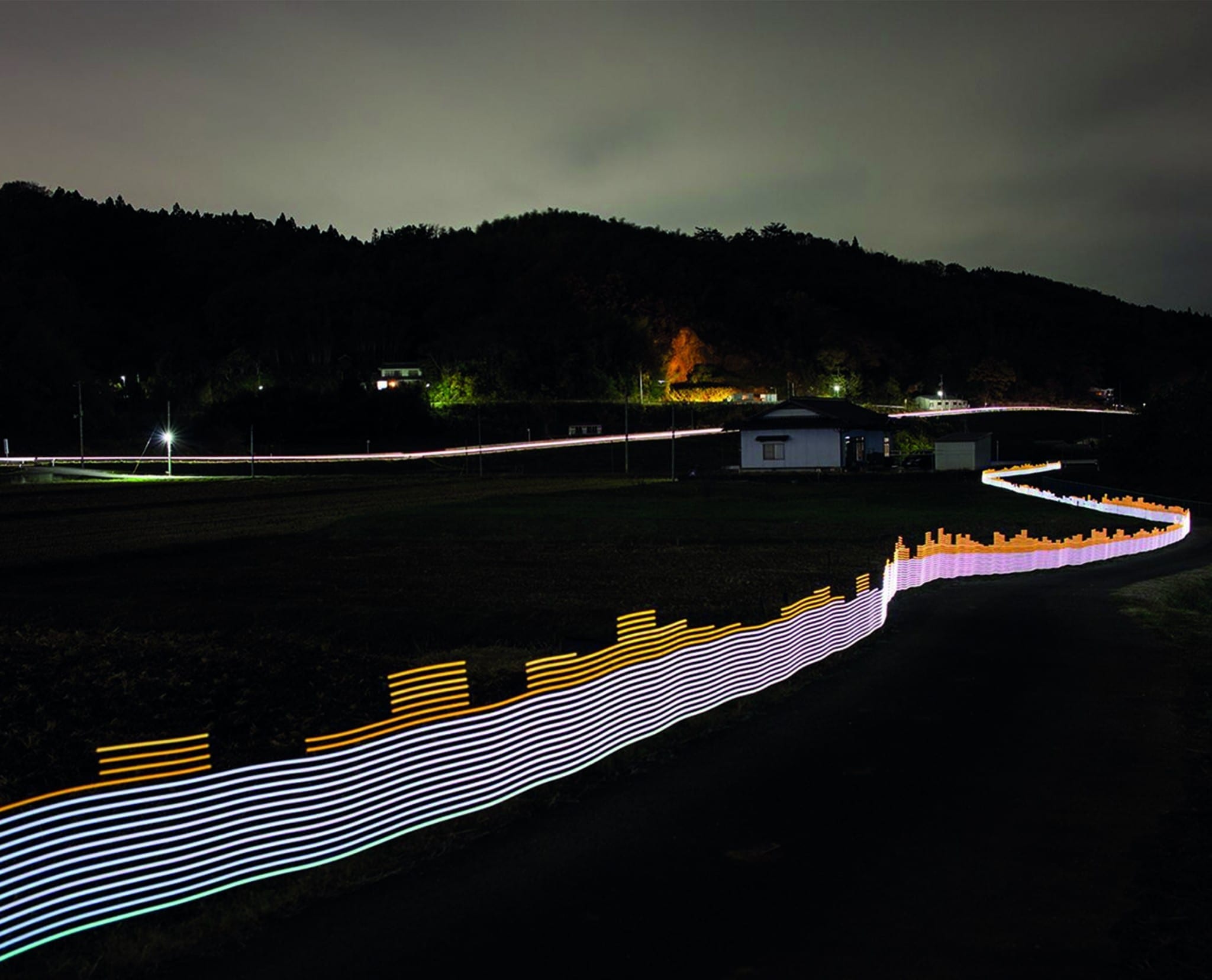 Why are we so intrigued and fascinated by data and info?

Dataviz is a lens that can be turned onto any subject. Complex, esoteric, academic, scientific areas often have important insights and knowledge locked away behind jargon and complexity, inaccessible to the public or even other scientists from other fields. Done well, dataviz can act as a portal, or a looking glass, so anyone can peer in and start to understand, the depths of a subject.

People say there is too much unwanted info in the world, this could be a nice flipside to that argument. It can also be very beautiful as well as intellectual.

In a rich and varied developing field such as dataviz, there’s plenty of room for many different intentions, many different audiences, many different goals and lots of experimentation.
There’s beauty in achieving all these different aims – not just the traditional notion of aesthetic beauty but also the beauty of clarity, the beautiful structure and integrity of great data, the beauty of a great story or insight, and the functional beauty of using or interacting with a really great piece of design. 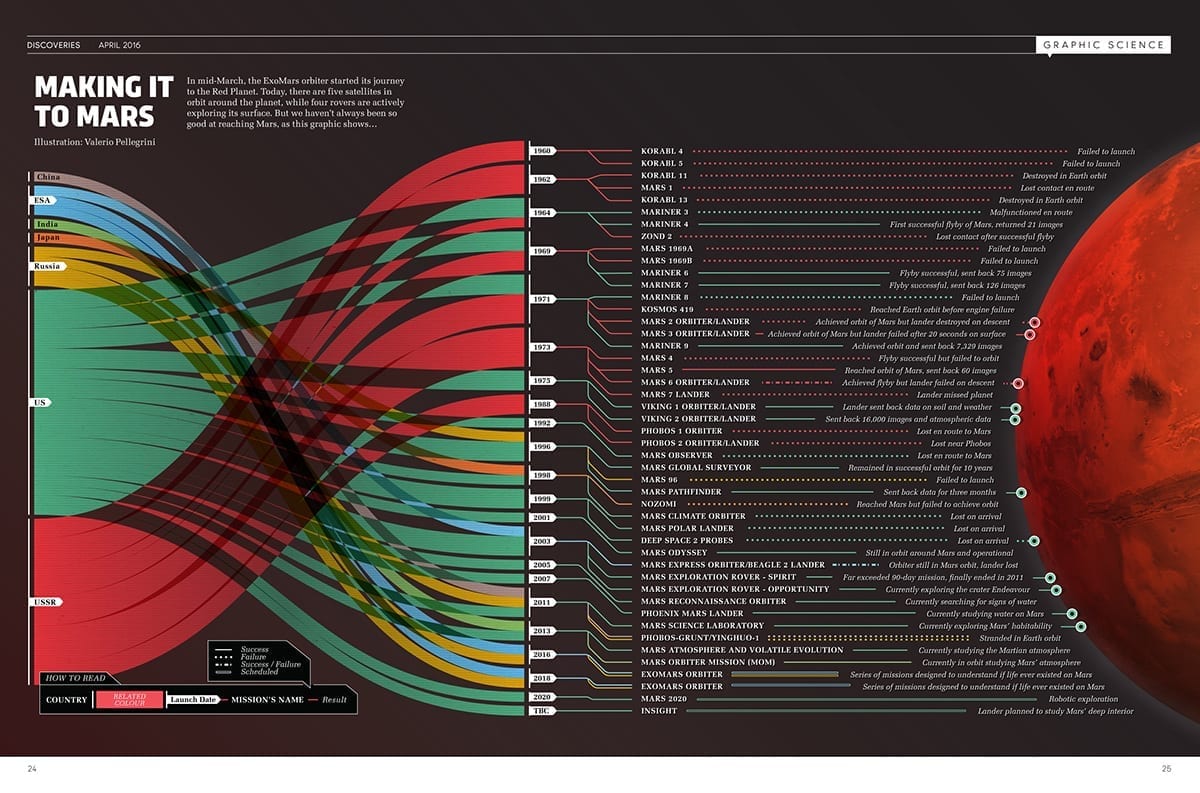 Making It To Mars: Artwork for BBC Focus Magazine , Graphic Science Section , covering all the missions intended to reach Mars. project of NASA

Watched: The field contact practices of the nation’s 50 largest police departments under a microscope.

What are some of the most insightful infographs or visualisations of data you have come across? And how can they help people understand issues better?

Earth Temperature Timeline by Randall Munroe won gold in the Data Visualization category. The piece makes brilliant use of the downward scrolling of a screen, taking you from 20,000 BCE to 2100 AD on the vertical…and on the horizontal from -4 to + 4 degrees C beyond average 20th century temperature. As you scroll, Munroe pinpoints various historical landmark dates – the completion of Stonehenge, the invention of paper, the volcano at Pompeii – but it quickly becomes apparent that the most significant change in global temperature has taken place in the past 100 years. It’s engaging, funny and scary at the same time.

Spies in the Skies from Peter Aldhous and Charles Seife winning gold in our data journalism category.  The team analysed aircraft location data collected by flight tracking website Flightradar24. It’s a great example of how visualization can uncover stories that might otherwise have remained buried in silos of public data (or invisible, thousands of feet above our heads in the air). 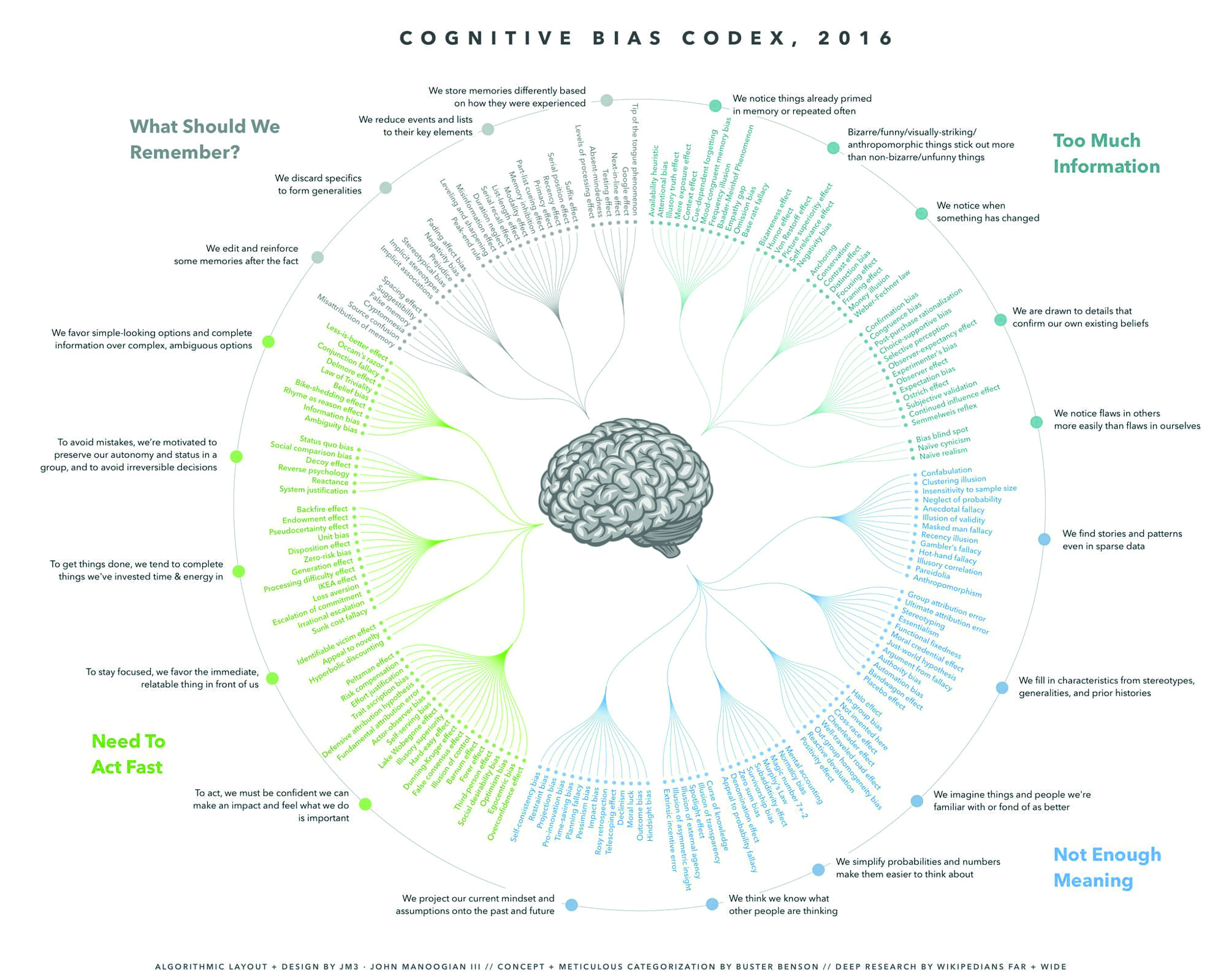 This graph breaks down cognitive errors into four quadrants of memory, meaning, information overload, and need for speed. 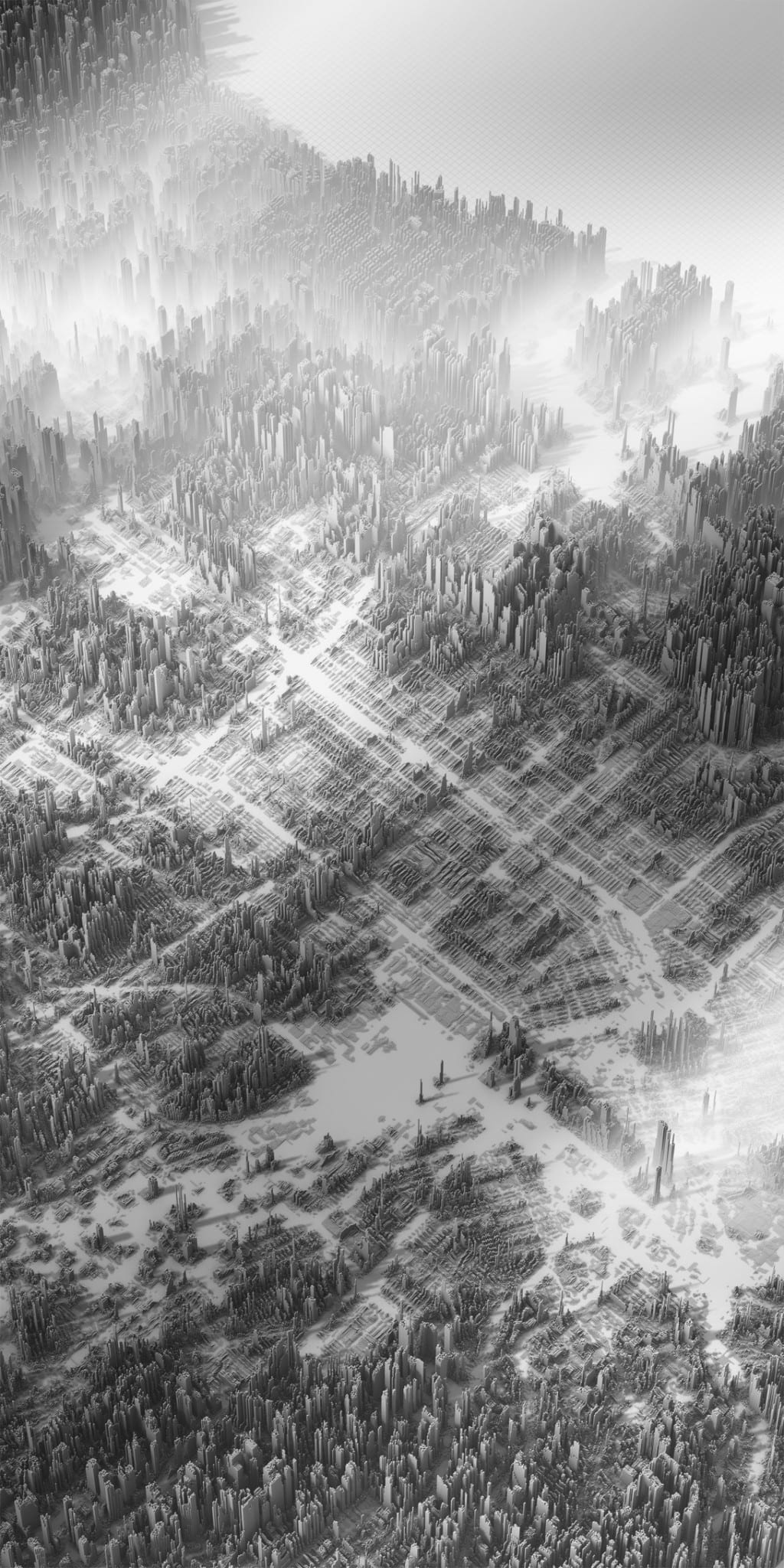 All the award winners can be found here.