It’s something that affects all of us, in fact, if you don’t consume it at all then you die. We’re talking about sodium chloride, better known as the food additive, salt. This is something so standard in our diet, but in many countries, iodized salt (which is salt fortified with the mineral iodine), remains the difference between a baby born with an intellectual disability or not. The issue remains a global problem and it is a significant burden to public health across the world, surprisingly most notably in the Western world.

Even moderate iodine deficiency, especially in pregnant women and infants, lowers intelligence by 10 to 15 IQ points, shaving incalculable potential off an individual’s, or an entire nation’s development. Studies show that iodine deficiency is the leading preventable cause of intellectual disability, and it costs no more than 5c a year to solve through the iodization of all edible salt. Places like Israel and the UK count many women at risk of developing health problems either within themselves, such as thyroid dysfunction, or more importantly in their offspring if they do not have adequate iodine intake prior to and during pregnancy. In France, for example, they don’t even allow the use of iodized salt in any processed foods, thereby neglecting the population of a potential source of iodine. And in spite of remarkable progress in increasing the availability of iodized salt in India, some health reports show that up to 350 million individuals remain at risk of iodine deficiency.

In 2013, UNICEF estimated that even though 75% of households globally protect themselves with iodized salt, more than 35 million newborns were unprotected from the lifelong consequences of brain damage associated with iodine deficiency.

So why do we know so little about this? Jonathan Gorstein, Executive Director of the Iodine Global Network explains,“Over 25 years ago, endocrinologists such as François Delange, John Dunn and Eduardo Pretell made a concerted effort to build awareness around this issue, highlighting the importance of iodine in the synthesis of thyroid hormones, which is very critical in terms of brain and cognitive development, but this knowledge has not been passed along to the broader public very well.” 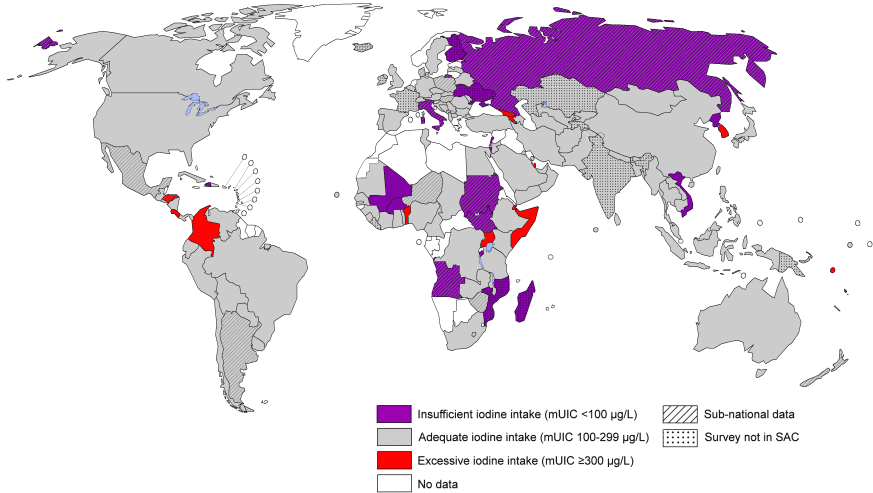 The history of salt is a curious one. By itself ubiquitous and sold around the world, it primarily comes from natural sources and is processed and then in some cases refined, which is to say crushed and packed and then distributed to households everywhere. The trading of it goes back tens of thousands of years, but the introduction of fortifying salt with iodine only came in the 1930s when David Marine in the US first realized the connection between iodine deficiency and thyroid disorders, thus coming up with the innovative idea of using salt as the vehicle for increasing iodine intake. Through the efforts of the IGN, UNICEF and other groups working with the salt industry and governments, national salt iodization programs became widespread over the past twenty years, but there is still work to be done. It’s been a constant battle for Gorstein and others to advocate for the use of iodized salt as a high priority for governmental networks across the world, especially in Western nations where salt is seen to lead to a risk of hypertension and other cardiovascular diseases.

The press around this issue as well is astonishingly infrequent, in fact, there are only a handful of articles out there that focus on it. In a 2005 article in the NY Times, the headline shouted, ‘In Raising the World’s I.Q., the Secret’s in the Salt’. Gorstein also emphasized that “the use of salt as a vehicle to improve iodine and salt reduction are perfectly compatible strategies, but the communication of this needs to be managed well: eat less salt but make sure that it contains adequate iodine.”tha

“…We have virtually eliminated goiter and the most overt signs of clinical iodine deficiency on the planet.” says Gorstein, “we have certainly come close to eliminating cretinism…all a mother needs is to enter pregnancy with optimal iodine status and to maintain this through her gestation in order to avoid inadequate neurological development, which is irreversible.”

Thanks to concerted global efforts such as that of the Iodine Global Network, the number of iodine deficient countries has declined dramatically over the past twenty-five years. At the end of 2016, only 19 countries were classified as iodine deficient, down from 113 in 1993.

Fortifying salt has been recognized as one of the world’s most cost-effective public health interventions, and remains an intensive active campaign, especially in areas where the choices for ‘hacked food culture’ remain aplenty. Gorstein reiterates this, “Our biggest success in terms of coverage, when you look at maps of global iodine status, is in East Asia and Sub-Saharan Africa, whereas our lowest coverage is in Western Europe, Australia, and the US. In fact, the greatest burden of iodine deficiency at the moment is in highly developed Western countries because of the fact that consumers are demanding free choice and countries cannot mandate the exclusive salt of iodized salt.”

Free choice or not, this essential fortified mineral remains a dietary requirement for every person on earth. So next time you ask someone to pass you the salt at the dinner table, remember to ask if it’s iodized salt.