Most people have daydreamed, at some point or another, about what they might do if only they didn’t have to work. And indeed, it is possible to imagine a utopian form of workless world, in which people want for nothing and have all the time they need to travel, or indulge their hobbies and interests, or simply relax and revel in idleness. Lived experience with joblessness is often less idyllic.

The involuntary unemployed are often very unhappy, and suffer from above-normal rates of depression and substance abuse. Even those who choose a life without work can find it disappointing. While many retirees find their post-work years to be happy and fulfilling, others struggle to fill the hours, and suffer lower rates of satisfaction, poorer health, and faster deterioration in cognitive capacity than those who remain in work. And if we were then to extrapolate worklessness across much or all of the adult population, the problems multiply. What would millions upon millions of young, healthy men do with their time if they did not need to work? Would it be socially beneficial on the whole?

Whether a post-work work would tilt more toward utopia than dystopia depends on how successfully societies can find good, non-work substitutes for the social roles paid work fills. Three of those roles loom particularly large. The first — the allocation of purchasing power — is superficially the easiest to solve. In the short run, governments could subsidise wages and introduce work-sharing schemes.
Wage subsidies might eventually evolve into a basic income paid to everyone or a system of social ownership of capital. In practice, such plans will be devilishly hard to implement. Tax systems will need to change dramatically, to become more efficient and collect much more money. Building the broad political support for such dramatic reforms will take a long time, and might only be possible in the face of national crisis. Historically, transformational expansions in welfare states have mostly occurred during times of economic depression or in the aftermath of war.

Redistribution will be especially complicated if substitutes cannot be found for a second important role played by paid work. When we work for a living, we don’t simply earn the money to put food on the table; we also earn for ourselves a social legitimacy that entitles us, in the eyes of others, to access the benefits provided by the state. Paid work, in other words, is one of the main ways we determine, as a society, whether someone is “contributing” or not.

Should large numbers of healthy adults find themselves out of work on a near-permanent basis, the legitimacy of redistribution toward non-workers will be called into question. Societies might devise alternative ideas about what represents a contribution to society, and new institutions to encourage such contributions — through voluntarism or community service, for instance. Yet until such institutions can be established, the temptation might be to determine who “deserves” state redistribution and protection based on racial or ethnic identity.

And if both of those massive problems can be solved, there still remains a third challenge: to help jobless workers build daily routines which satisfy their human desire for agency and purpose. Meaningful community service might suffice; make-work almost certainly will not. Idle adults might be a source of social instability. Or, they might find occupation in drugs or immersive video games, creating the prospect that large swathes of society operate in an isolated half-reality.

Things might not go quite so wrong. Maybe society will sensibly expand redistribution while creating new institutions to help prepare jobless workers to find satisfaction in pro-social activities like care-giving or enriching hobbies. Or maybe futures which seem dystopian to us will not feel that way to others; yeoman farmers three centuries ago might have quailed at the thought of an office-bound existence spent staring at glowing screens, much as we recoil at the idea of a future lived in virtual reality distractions. Yet even if the distant future is not itself dystopian, the difficulty in reforming our institutions and reshaping society to adapt to new technologies means we are in for some hardship and heartbreak.

Ryan Avent is senior editor and economics columnist at The Economist. His book The Wealth of Humans: Work and its Absence in the Twenty-First Century is out now through St. Martin’s Press 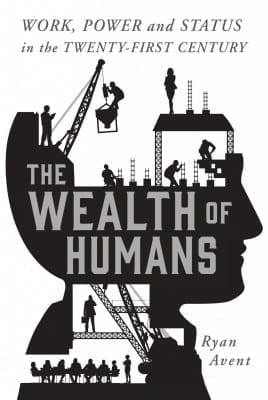