If you need proof that the future of healthcare has arrived then look no further than Babylon, a medical app that allows people to be treated by a hybrid of artificial intelligence and humans.
Created by Iranian entrepreneur Ali Parsa in 2014, Babylon checks billions of variations of symptoms through a refined AI technology.  Parsa recognized a growing gap in the market for personalized tech healthcare and now one in every 200 people in the UK are using the revolutionary app. At one time the founder of Europe’s largest clinicians group called The Circle, he is now intent on “doing for healthcare what Google did for information”, making it available for everyone, everywhere.

Ali Parsa: When we started Babylon it was very simple. We wanted to create a way to make healthcare accessible and affordable, and put it into the hands of every human being on earth. If you want to do that then you have to dissect human healthcare needs and ask, how do I meet each of these needs? And which can I not meet? So for instance we cannot do surgery remotely today, but we can answer your questions, we can take your symptoms, we can get you to see a doctor, we can monitor your health, we can get you to see a specialist. That’s what we do.

We’re short of 5 million doctors in the world. So we started developing a lot of artificial intelligence to do the things that doctors don’t necessarily have to do, or even things that machines can do better than doctors. For instance a couple of months ago we launched our symptom checker. It checks billions of variations of symptoms significantly more accurately than a human being would. So that allows our doctors to spend time on things that requires the complexity of the human brain. In the UK it has gone very well. Today one in every 200 people in the UK are on Babylon. More importantly one in around every 100 young people are on Babylon, and one in every 30 young people in London are on Babylon. So it’s serving it’s community well, and the next step for us is to go to an East African country to see if we can deliver this quality of service to some of the people most in need.

Your background is in healthcare. why do you feel the need so much to transform it?

Hospitals only deal with five percent of human need for health care, and yet we do a lot of that very badly. Think about it. A number of years ago people used to go and see their bank manager, but who does that anymore? You just tap your phone and do all your banking. So why do we do healthcare so badly? So inaccessibly? So expensively? I wanted to start focus on Babylon rather than the hospitals. I’m 50 now so I don’t have much time to waste, and as an entrepreneur when something gets under your skin it’s very difficult not to do it.

The potential impact of this kind of technology on communities in developing countries is certainly exciting. What stage are you at in this process?

We’re obtaining our license, we’ve written our technology in a way that can be written by the majority of phones in East Africa, we’ve set up our offices, we’ve employed a large number of people, we’ve trained our doctors and nurses, and set up a call centre. We’ve done trials that have been pretty successful and we’ll start operating before the year ends.

When you started this project was it always with the intention of eventually applying it globally?

Yes, we think we can do with healthcare what Google did with information. Borders are, in my mind, a hugely artificial thing. A human being is a human being, wherever they are in the world. We have somehow managed to make healthcare a very country based service, but in reality, like any professional service, it can be delivered globally. You know, you don’t write an article and say that only people in the UK can read it.

Have you been surprised by anything that you didn’t foresee during the process of developing and trialing the app?

You mentioned this new AI you’ve developed. Is that just the symptom checker or are there other features that are being integrated?

Basically what we’re doing is this: If you take the brain of a doctor, there is a knowledge base and a communication part, then there is a piece that does medical reasoning, there is a piece that makes predictions about your health and what will happen to you, and there is a learning piece. So we have teams in Babylon replicating those parts of the brain. We have a knowledge team which is creating a huge knowledge base. We have a team that is working on language recognition and generation. We have a team that does diagnostics and triage. The triage we have already launched and the diagnostics we will launch early next year. At the moment the triage will tell you how at risk you are and if you need to talk to a doctor or not, and once we diagnose we can tell you immediately what treatment you need. Then we have a predictive analytics team that looks at your data and predicts where your health is going to be. And then we have a deep learning element that tries to learn from everything we do. 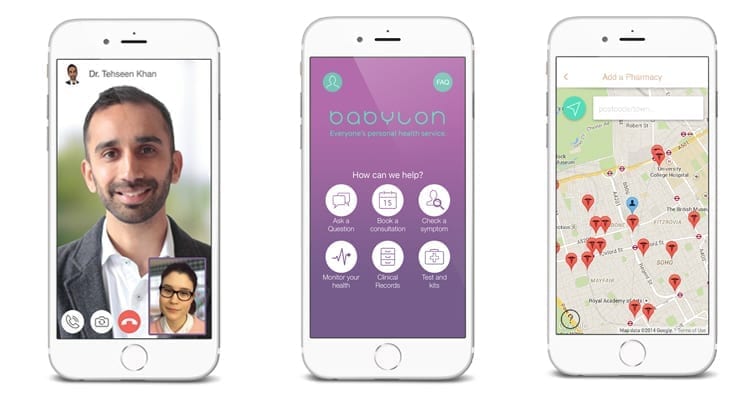 What is your long term aim with Babylon? How do you hope to see it develop in the next five to ten years?

I would be incredibly disappointed if in five to ten years’ time somebody has not done to healthcare what Google has done to information. I hope it’s Babylon but frankly it’s irrelevant to humanity who it is. But healthcare needs to be available for all, at prices everybody can afford. I think that the science of it is here. Imagine the middle of next year, any disease you might have can be identified using Babylon. We would not be able to tell you what that disease is, but we can tell your doctor what that disease is, and it will cost you nothing. 50 percent of the world’s population does not have access to a doctor, but most have a mobile phone in their pockets. Imagine what it will do to the world. Now that doesn’t solve all the problems because you can ask, well where will patients get the medicine from? How will they get to a hospital? And these are all good questions, but we can at least go some way to solving the problem.