In the future we might all have our own robots following us around, doing the jobs we aren’t interested in. For now we might just have to get comfortable with the idea that robots are going to play a larger role in our lives and our workplace. Estimates that up to 47 percent of U.S. jobs could be automated within the next two decades have allowed panic to set in amongst governments around the world. 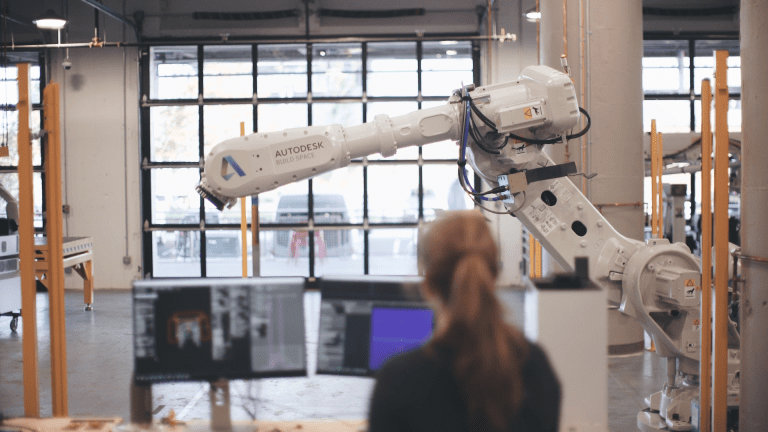 Flip that coin and we are greeted by Madeline Gannon, a former architect working out of San Francisco who spends most of her days enjoying the company of robots, trying to understand why these things are treated with such indifference and contempt. These are not just inanimate things in her world, they’re everywhere for Gannon. She confesses her love for movies like Her and Wall-E, how the “ubiquitous technology” displayed in these movies allows her to dream of a better more adjusted world.
You can hear her voice rise with affection when she discusses these sentient bots,”I have a soft spot in my heart for these machines …they can hold 300 kilograms and move 7 metres per second to a millionth of a precision, all these things that describe our favourite superheroes are in these machines but we just don’t have a great way of using them in a way that amplifies our abilities instead of replacing them.”

They call her the robot whisperer. Working out of her studio Aton Aton, a research studio at the cutting edge of the robot human interface. It’s a place most people don’t feel so comfortable with, especially if you’ve seen the beta robots emerging out of the studios of companies like Boston Dynamics, running at dizzying speeds, jumping over walls and terrifying the beejezus out of people.
However Gannon wants us to understand there is a much softer side to these automated machines. Mimus is one of those exemplary robots, displaying a largely more playful sensitive side. It debuted at the Design Museum last year in London and caused quite a stir. As Gannon explains, “Part of the curiosity I had was seeing if we could actually get people to think of this thing as curious or excited or intimidating?…When we did the physical design of the installation I was really inspired by the idea of going to the zoo to see an animal you’ve never seen before.” It was this awakening, realizing that robots could actually possess more humanistic emotions, that set Gannon of on her quest of bridging this relationship between ‘us and them’.

An enchanting animal it could be for now, but in a very near future we need think tanks and labs like Gannon’s Aton Aton to figure out what role these more human-like droids will play in our society.  There are thought leaders out there such as Martin Ford and Ryan Avent who are more pessimistic about how that will play out. Gannon doesn’t deny this and is aware of the problem, insisting people feel like they have “no agency in this, and that technology is happening to them”, but Gannon’s cutting edge lab Aton Aton has a very important role to play in terms of setting  out a future road map for a society keen on exploiting these “super powers” instead of putting them back in the box and exposing the more domesticated side of these robots not just the industrial aspect.
“It’s a pretty exciting time for us” says Gannon, “At the moment what we have been working on is helping to envision possible futures that may exist for emerging technologies. A lot of companies, like Autodesk who I work with, are trying to ramp up their efforts in robotics, so I’m able to go off to fairly unchartered terrains and look further down the road – assuming that robots are going to be part of our everyday experience, how are we actually going to communicate with them?”

In the 1800s, 80 percent of the U.S. labor force worked on farms. Today it’s 2 percent. That might be again something mimicked in the workplace if robots have a real impact on our lives.  The key question is if our working lives change, how will robots play a role in our lives? Gannon wants us to reframe the way we think about this area. “I want to see us talking about technology in reference to ourselves rather than as this external entity and the ‘us vs. them’ narrative that we have today. If a robot makes your life better you’re going to like it and you’re not going to think about it as an external piece of technology, it will merely be a fact of life.”

Fear and Love: Reactions to a Complex World closes on April 23rd