In all of the 14 minutes that you’re subjected to Signe Pierce’s in-your-face conceptual reality video American Reflexxx, you’re taken from curious to overwhelmingly shocked.  It’s a ballsy, confronting and important piece of work. But all the more interesting because of its sheer originality within this context. A product of the social media generation, Signe is intent on smashing barriers & ideas about what art should or can be. This is art post-everything. A fresh new voice, we meet Signe Pierce.

Let’s talk American Reflexxx which is your most known and important work to date. You made this video with your former partner Alli Coates in 2013 but waited until April 2015 to post the video, why such a wait?

Alli and I spent the latter half of 2013 editing the film, and then spent 2014 screening it in various art exhibitions/film festivals. The art world is so fickle and weird about the arbitrary rules surrounding art and the internet. We had a bunch of people on one side telling us NOT to put it online until it had finished its full run on the festival/gallery circuit, and the other half wondering why the hell it took so long for us to put it online so everyone could see it. At the end of the day I’m glad we waited until we did to put it online… the timing was just right. It’s silly though, people want to act like putting work on the internet is the kiss of death, but the ride that this film has had since its internet release in April 2015 is astounding. It’s been shown in 5 continents and has taken Alli and I to multiple cities, and connected us with so many incredible people. The idea of holding onto physicality/tangibility in art world is outdated. Most of the best art I see these days is via my computer screen. Going to a gallery walk often leaves me with blue balls.

The abuse you endure and the awkwardness that ensues in A.R. if we can be completely honest is not totally unpredictable. Putting yourself amongst a certain type of demographic that are inebriated or insecure that also have no appreciation of the strange or outlandish is like walking into a lions den.

I have an approach to art-making outside of big cities, which I call ‘The Bubble Theory’: Cities that attract artists are like bubbles. They are big, colorful, iridescent places full of life and culture. However, I think it is an artist’s responsibility to pop that bubble and let the iridescence ooze into the places that might not be so typically exposed to that side of life. Making art about queer theory and having it shown at a gallery in NYC where I’m preaching to a choir of queer people who already get it is lovely, but it’s not my M.O.

With American Reflexxx, I was by no means seeking to bait the people of Myrtle Beach into behaving badly by staging the performance, and I wasn’t expecting the kind of outcome that we received. Alli and I genuinely just wanted to create something beautiful. We wanted to pop the bubble. During the week of its online release, American Reflexxx ended up making the rounds on Fox News, which exposed it to thousands of people who would never normally be confronted with performance art dealing with queer/trans/feminist politics. That was a huge accomplishment and is exactly what I strive for when making art in reality.

I do feel very sorry for you but also for these people, they seem so down-trodden, so uncultured that they only have an almost robotic defense mechanism. Like if they don’t act that way they will be shunned by people around them. How would you respond to this?

I think that it reinforces my idea that art & artists need to not be so insular / institutional. Art needs to bleed out into the world. Art has the power to open the mind to possibility, beauty, chance, limitlessness… all of the infinite aspects of our existence. Its power is something that I really believe in, especially in regards to sparking new ideas and an openness to possibility. Wonder is a feeling that I’m actively consumed with, and it is something that the US government and media doesn’t openly promote. That’s where art comes in, and that’s why it’s important to push it to live outside of the ritzy, segregated art world.

Were you at any point scared for your safety?

Yes. After the woman pushed me down and no one helped me up it definitely crossed my mind that, “Oh wow. These people might kill me.” I was convinced they were going to break my camera, which weirdly felt just as anxiety inducing as the fear of them hurting me (cyborg problems). Random men kept reaching up my skirt trying to see what my genitalia was, and I felt like it would be really easy for them to stage a gang rape. The whole experience was extremely violating and wrong, and it was a slice of what so many trans people, queer people, and women have to deal with every day in a society that undervalues our agency as human beings.

What is beautiful about the video is that you came out saying in an interview – “It’s inspired me to think more about the ways that art can help others and how our work can serve to fuel conversations that need to be had.” It’s great that this was a product of the video.

It is. It’s been an incredibly rewarding and humbling experience.

I just have to say that Hot Sugar – Sinkies is so awesome and hilarious. Whose idea was that?

Nick (Hot Sugar) is the brains behind his operations, I just make it look pretty and lush as the production designer. I love working with him, we’ve done a few videos together. We’re talking about a new long-form project, hopefully happening later this year.

Looking at your latest exhibition Motelscape with Marina Fini and Sierra Grace and your Tumblr stream. I can’t help but feel that we as a generation have almost become half-tumblr stream/half-human. The transformation has started. Do you feel we are literally becoming the social media that we invest so much time in?

I think that the commodification of reality is a large aspect of a life largely lived behind the screen. A camera phone allows us to all be the stars of our own reality show, be that on your Snapchat, Instagram, Tumblr, whatever. We are the programmers and the stars of our own reality, so it’s becoming more commonplace to exploit our reality for ratings or likes. Jean Baudrillard predicted all of this long before the Internet was even a thing, essentially saying that, “the hyper-real becomes the real”, aka the reality you curate when you’re “doing it for the vine” is perceived as your actual reality through the filter of an iPhone screen.

Motelscape is a good example of this experiential commodification. Marina, Sierra and I all channeled our love of motels & sleazy, romantic Americana to turn a fantasy into a reality. I’m all about actualizing fantasies, be it artistically, sexually, or politically. 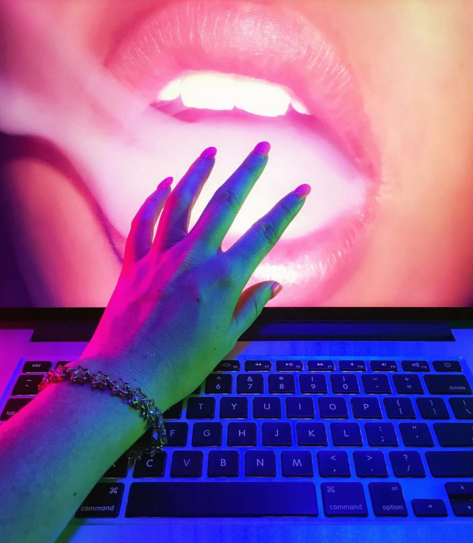 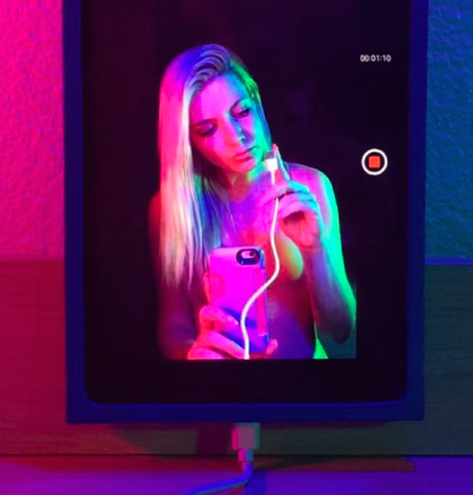 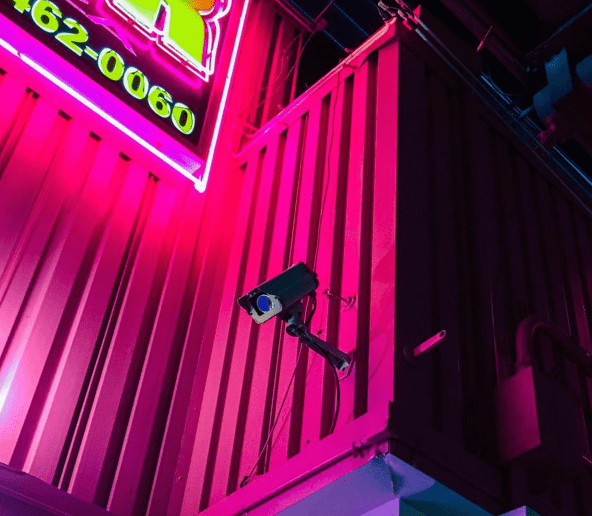 You are part of this new wave of fearless modern artists that are taking the art world by storm, such as Amalia Ullman, Petra Collins, Tavi Gavinson. A very exciting time to be expressing yourself. Do you feel you are part of that and what’s next for you?

Thanks! I’m very happy to be a working artist, and I have a lot of love and respect for my contemporaries. I want to take the opportunity to shout out a few other artists that I love — Juliana Huxtable, Ilana Savdie, Monica Mirabile, Hobbes Ginsberg, Yulan Grant, and Martine Syms are a few that come to mind. They’re some of my favorite artists and I think that the rhetoric surrounding their work is important and deserving of more attention.

In terms of what’s next, I have a series of performances, videos and photo series’ burning inside of me that have yet to be fully realized. I’ve been developing a piece for the past five years and I can feel it rumbling beneath my surface. It’s almost ready to come to life, but until the fantasy is actualized you’ll have to wait and see.