Over the course of London Fashion Week, one of the most creative and inspiring designers on the scene, Virgil Abloh, stepped out to organise a series of workshops and talks with Nike, marking the launch of his latest venture with them, a sneaker collection called the TEN. “A space for the exchange of new ideas in sport & culture” is how it was billed.  The event, held at a warehouse in East London’s capital Shoreditch, was a celebration of Abloh’s reconstruction of Nike’s ten most iconic sneakers, including everything from the Air Jordan 1 to the Converse Chuck Taylor, to their latest Zoom Vaporfly, designed to support Nike’s Breaking2 marathon project. The sports brand, which has gained cult status across many cultural fields, looked to open source its creative process by hand-picking a mix of fashion designers, artists and musicians to bring their own spin on Nike to the masses, from Martine Rose and Michèle Lamy to Benji B and A$AP Nast. Advertised to its legions of fans, thousands applied for a chance to take part in this one of a kind creative collaboration. 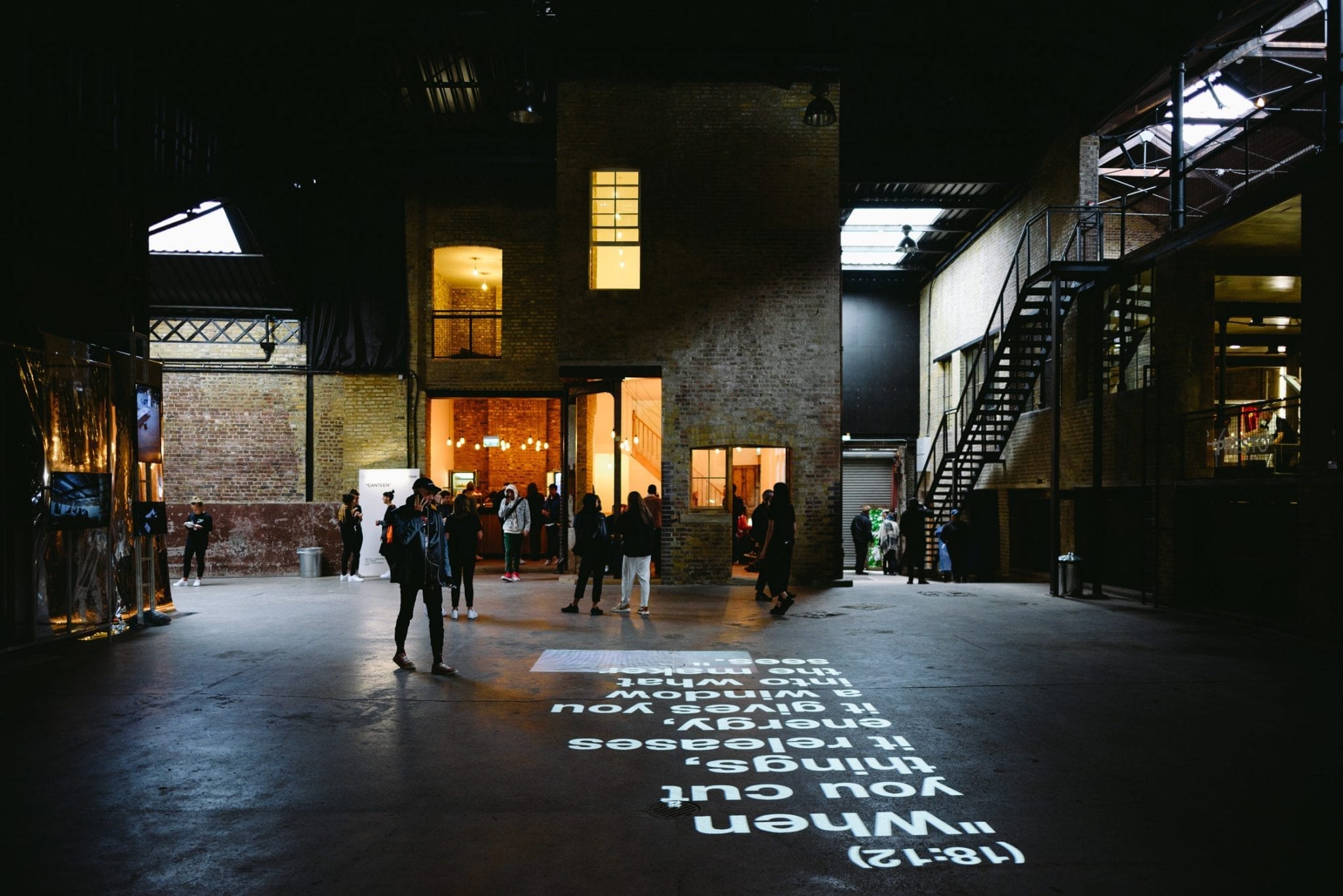 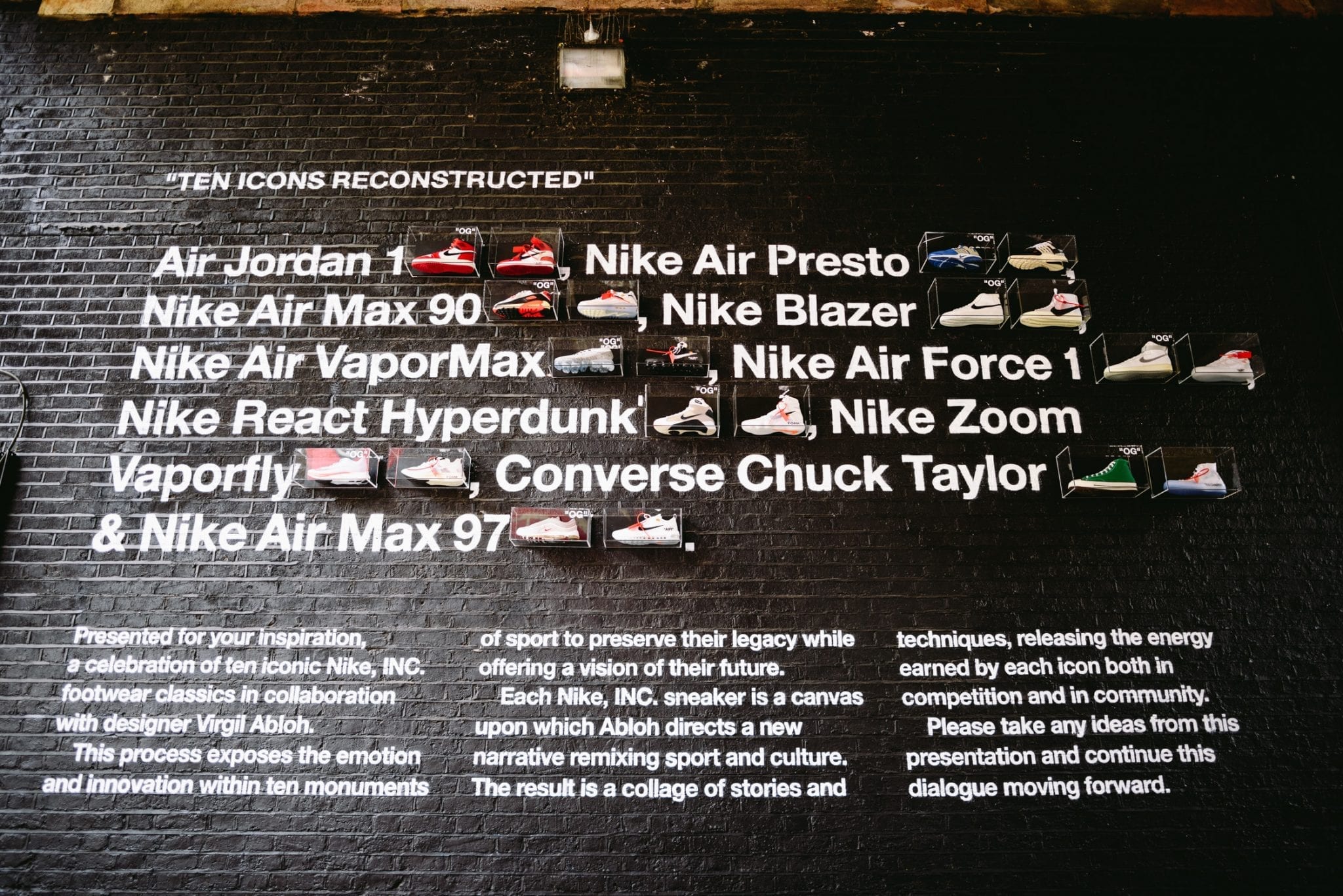 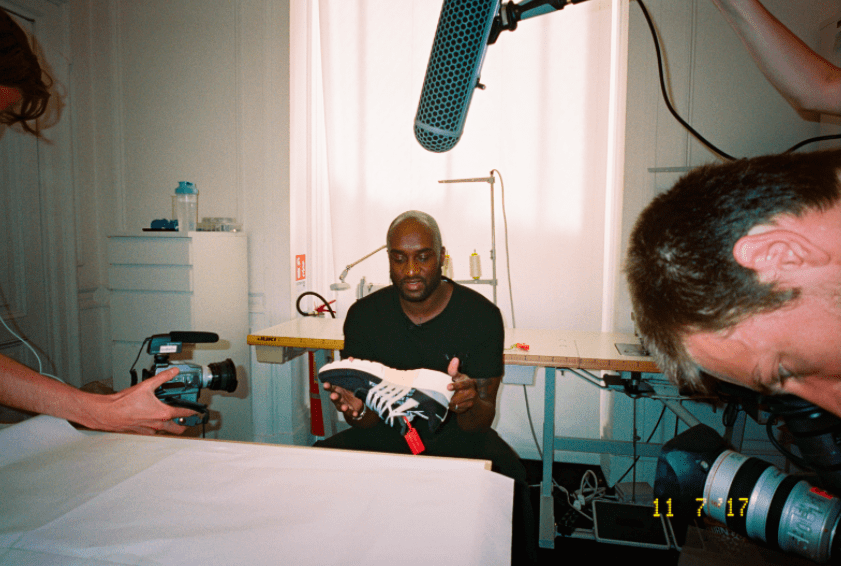 The TEN, the brand’s fastest ever collaboration, was the result of a trip made by Abloh to Nike’s Oregon headquarters, where the designer started playing around with a pair of Air Force 1 shoes, an X-ACTO knife, some marker pens and not much else. Thus began an exploration and reconstruction of more classic styles, with translucent materials highlighting the innovative design within, such as the Air technology, and tongue-in-cheek script such as ‘SHOELACES’ on the shoe strings. Nike has a long history of collaborating with creatives at the forefront of their field, such as the legendary designer Marc Newson, so this link up with the polymath designer/architect/DJ Abloh is an unquestionably good fit.

With Nike and Off White logos scattered around the place and design-speak projected on the walls, it felt like a hub of innovation, a fresh and exciting way for Nike fans from all walks of life to interact with the brand. The space was set up for participants to explore their creativity and to collaborate, an important element of the Nike philosophy, with seamstresses, screen printers, mannequins and a group of dedicated Nike mentors. In homage to the Nike Air Presto, the lifestyle sneaker introduced in 2000 and described as the ‘t-shirt for your feet’, we attended a ‘cut and sew’ workshop hosted by London-based menswear designer of the moment Martine Rose. 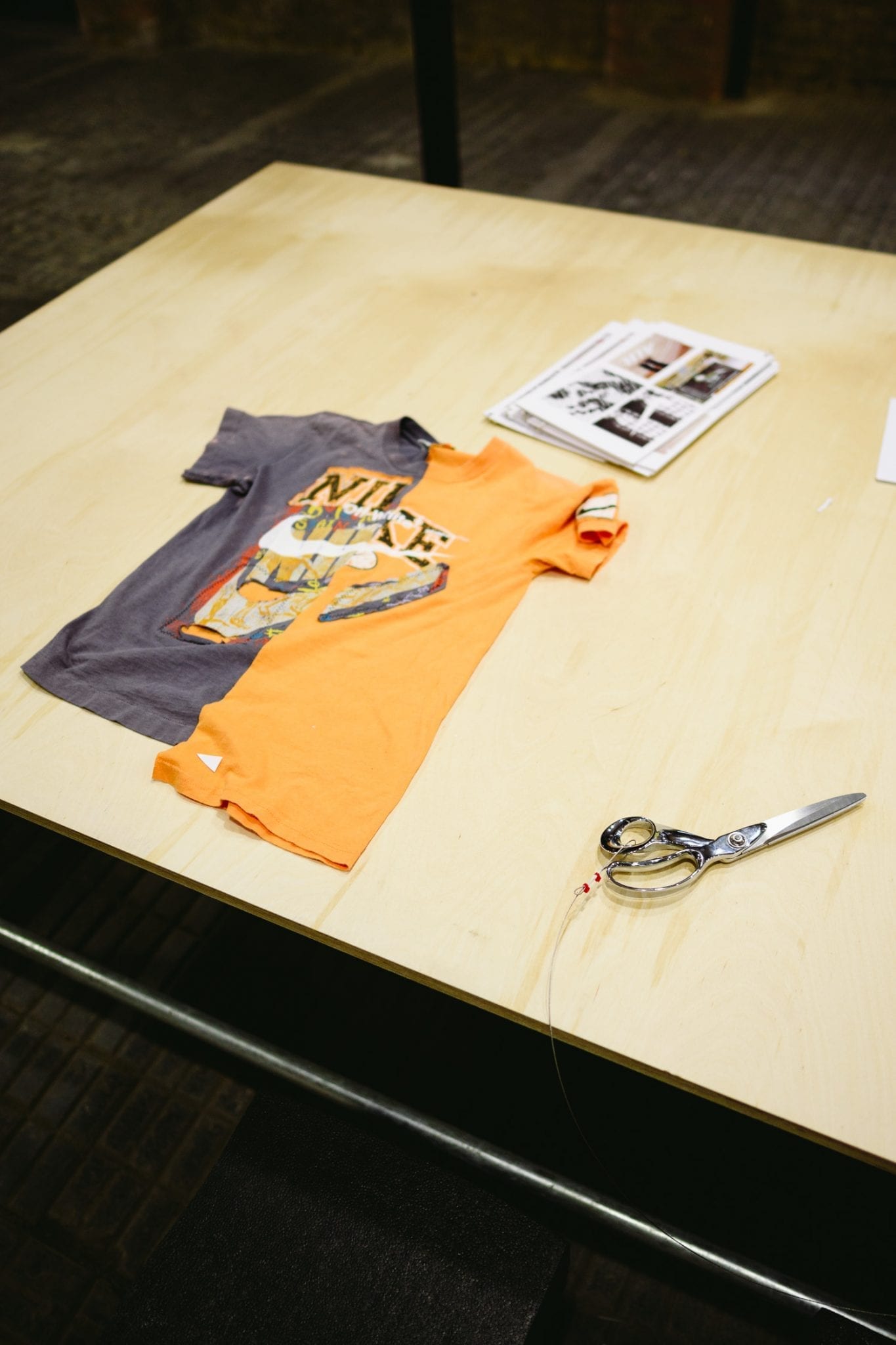 Martine’s own design career started out with t-shirts, “screen printing on my bathroom floor, literally” as she describes, firstly under the moniker LMNOP before carving out a new path with her celebrated namesake label. The influence of street style and culture is evident in her work, from bumbags to cycling shorts, and her connection to Nike, since wearing the original Huaraches as a teen, has been cemented by their support of her catwalk shows in the last two seasons. Coming into the Off Campus space as a mentor seems like a home away from home for Martine Rose, who herself teaches a design course at Middlesex University, and it’s the diversity of cultural influences and people that Nike has brought together for this project that really resonates with her own design mentality; “I’ve met such a variety of people through these workshops, for example a guy who works at Carphone Warehouse, a mechanic and a chemistry student, but everyone is united in this love for fashion. They don’t really have another outlet to try out these creative ideas… I think that is what is so exceptional and unusual about Nike is that it really straddles every single element of culture.”

For Virgil, this opportunity to give everyone the chance to explore their creativity is a real testament of Nike’s ‘Just Do It’ mindset – “I spend a tremendous amount of time thinking about the kid in the middle of nowhere with a passion for design, much like I did. He or she needs a path like this to understand design.”

The full TEN collection will be available to buy from November in Nikelab stores and selected retailers worldwide.