If there is one thing that has been surprisingly mistranslated or lost throughout the whole #MeToo or #TimesUp debate it’s the derogatory and abusive attitudes towards women in hip-hop culture.  I’m not sure how it has escaped the scrutiny of the press en masse; perhaps it’s due to the fact that there are certain facets of misogyny that we accept that we cannot change or is part of the status quo.

Let’s try a fun little experiment. Tell me who said what below and if it makes you feel uncomfortable?

“Bitches ain’t sh*t but hoes and tricks / Lick on these nuts and suck the d*ck.”
“I know she like chocolate men / She got more n*ggas off than Cochran.”
“You ain’t no better because you don’t be f*cking rappers / You only f*ck with actors / You’re still getting f*cked backwards“

All of the above is authored by Snoop, Kanye, and Jay-Z in that order. Icons of our time idolised across the world, all of whom have sold hundreds of millions of records. Kanye even talks about his wife in a derogatory manner. All these hip-hop stars have in one way or another knowingly berated women since the start of their careers. I’m not a social scientist but it is (nearly) universally accepted the knowledge that advancing the cause of women is helpful for everyone. How can women get on an equal footing beyond the culture of sexual harassment and power politics when every fifth word in hip-hop culture is ‘bitch’ or ‘hoe’?

If any of these hip-hop icons in this climate actually slowed down their words and stated their claims above in a conversational manner, either live on television, in a debate or in person directly to a female, you can bet their careers would be left in tatters. There would be no room for complacency in today’s global fight for accountability. The world would rise up on social media and they would be airbrushed off covers like James Franco or their performance edited out à la Kevin Spacey.

Ultimately it’s up to us to call it out. Shall we go back and rewrite history? No. Shall we go back and hold all these hip-hop icons accountable? No. The list would be endless in that case.  Shall we re-educate people that talking about women in such a manner is wrong? Absolutely. I am not against hip-hop culture, in fact, I’m a big fan of all the above artists. I believe in hip-hop as a form of political resistance and the power that it carries as a strong social conscience. But just because I put quotation marks around ‘free expression’ or ‘culture’, that doesn’t make assaulting women on paper ok. I get that calling it out makes people feel uncomfortable but here’s the thing: you can’t call out misogyny of one type of man and not call it out for another type. If we’re going to sweep the street clean then let’s do it properly. With recent allegations turning into groundswell support around Nelly the rap superstar and Russel Simmons of Def Jam, maybe we’re turning a corner but let’s not hold our breath. Perhaps rap and hip-hop should come with the below warning sign. 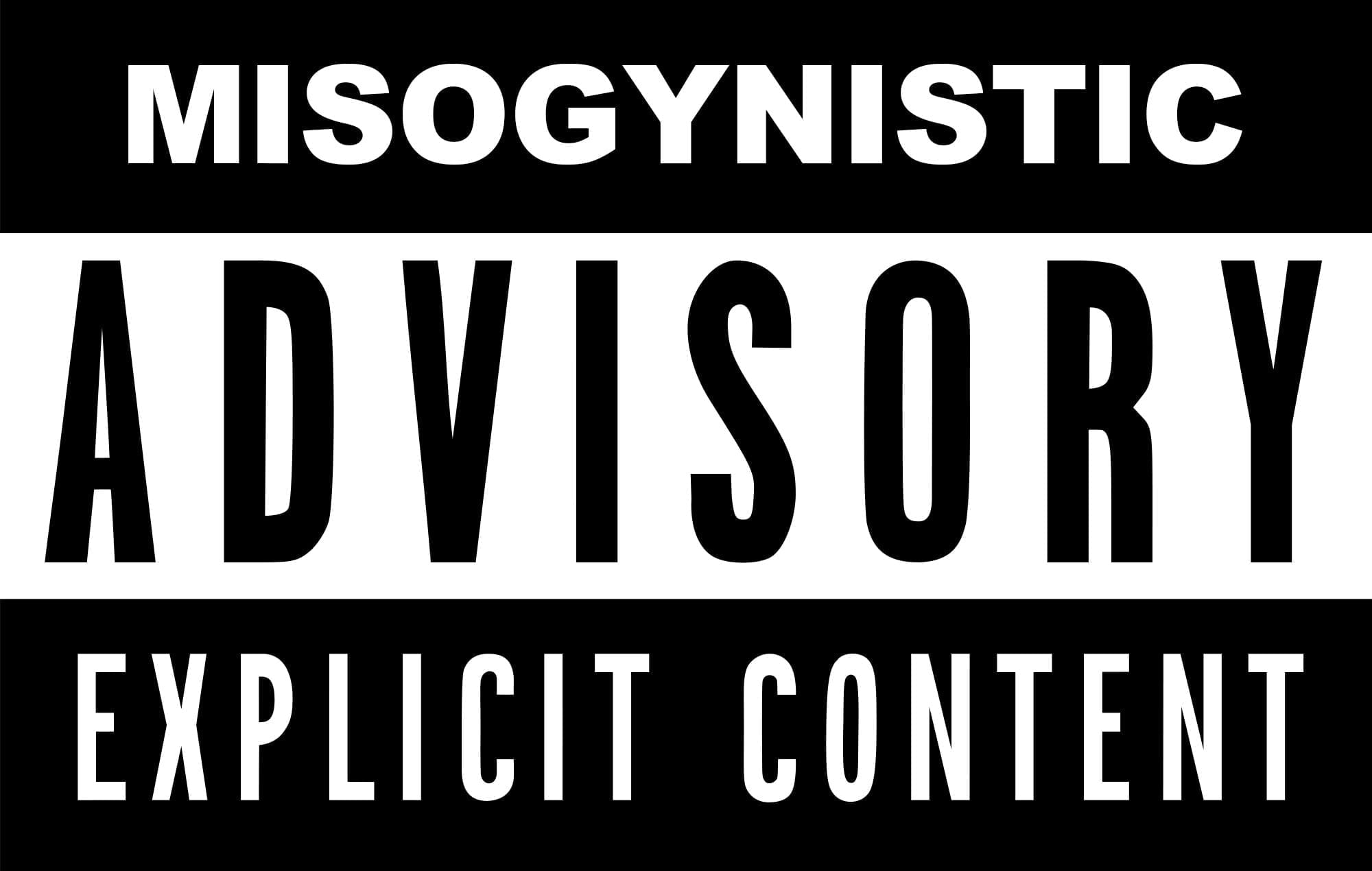 If we groom young kids to enjoy the lyrics of this music, from the ages of 6-7 up until their young adult life, of course, they will emulate what they’ve heard over and over and let’s not forget the rampant homophobia that is in hip-hop. Those words become scripture to them. They won’t see it any other way, dressing like them, talking like them, thinking like them, psychologically this will become built into them. What intrigues me is that women from all around the world enjoy this music, they play it endlessly, dance to it and sing to it. ‘Bitches, sluts, hoes’, all the above just don’t do anything to empower or forward the cause for females around the world. In a powerful piece written in BET magazine titled ‘Hip-Hop Hates Me‘, Kai Miller articulates her predicament, “I believe it begins with holding powerful men accountable for the hazardous environment they are creating and recognizing that my work plays a part in nurturing it.” Cue the inherent paradox involved here. Then there is a whole other argument to be made about how females live up to and act the expectation of what they are supposed to be like in hip-hop. Cue Nikki Minaj, Rihanna, and Beyonce. What would hip-hop culture look like if men looked at them as equals and not as role players? What would happen if women didn’t feel like they needed to dress or act a certain way to fit the role. Would they dress differently, act differently etc.? It’s worth taking a moment to applaud rapper Eve for standing up to male-dominated hip-hop culture last year.

Ultimately the question is if record companies want to pull the plug on an industry that it’s complicit with? Do they want to have a real discussion about hip-hop’s effect on young fertile minds? The industry benefits largely from the image that hip-hop projects, a genre that now according to one report accounts for $10 billion per year. But we have to keep in mind the larger picture. An academic friend of mine once said to me that we didn’t know what sexual harassment was until someone coined the phrase. A kind of profound way to think about it. I think that if we say #nomisogynyinhiphop then perhaps the parameters will change. Watch this space.

Ari Stein is the founding editor of 52 Insights