Known as the modern father of physics, Albert Einstein made headlines today for altogether different reasons, this time for his thoughts on wellbeing. A series of personal notes written by Einstein on Imperial Hotel stationery and given to a local Japanese courier fetched 31,000% above asking price at auction in Jerusalem yesterday, going for a combined $1.8 million dollars.

The two notes were written to the courier in light of the courier’s policy of not accepting tips. Einstein after writing the notes then went on to tell the courier – hopefully, this note is worth more than the tip someday.
What did the notes say that got bidders in a such a frenzy? “A quiet and modest life brings more joy than a pursuit of success bound with constant unrest” and “Where there’s a will, there’s a way.” 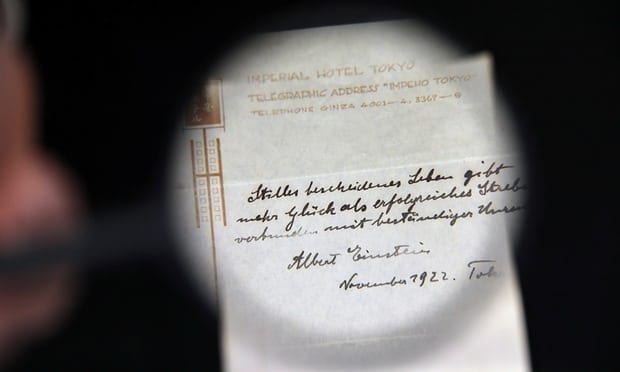 At the time, Einstein was on a successful speaking tour in 1922 with flocks of Japanese fans coming to hear him talk. The tour became a watershed moment for him as he had learnt on the trip that he had won the highest honour in his field, the Nobel Prize in Physics. The award recognized his contributions to theoretical physics.

Einstein served as a non-resident governor of Jerusalem’s Hebrew University. When he died in 1955, he left the institution his archives, making it the owner of the world’s most extensive collection of his documents.