Between the searing heat and the pandemonium of the World Cup, Donald Trump will be making his way to London for his first official visit to the UK starting tomorrow.

Upon meeting him will be one of the largest mass demonstrations in the UK in recent memory.  Up to 200,000 people are expected to assemble in London on Friday, 13th July for his four-day visit which will include a meeting with the Queen, the U.K. Prime Minister Theresa May, plus a golfing trip to his home course in Scotland. 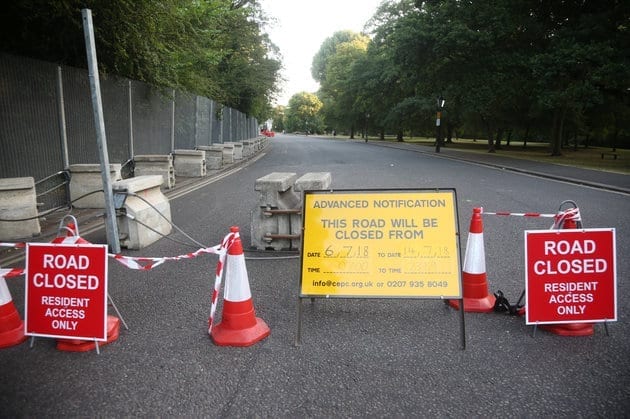 Even though he is expected to avoid the capital of London altogether, plenty of gatherings and mass demonstrations are planned throughout his trip.

The largest gathering will be a ‘Protest Trump’s visit’ demonstration expected to attract over 150,000 people on the 13th of July in what has been described as a ‘carnival of resistance’ in central London. There are plenty more events taking place right across the UK as well.

So unpopular he is on this coming trip that the US embassy in the UK had to issue a statement on its website Tuesday, warning that Americans should “keep a low profile” and be cautious in case protests turn “violent.” Donald Trump originally planned to visit the UK back in June 2017 but had to delay it because of heightened tensions with the UK.

Why are people protesting?

One of the organisers of the protest Owen Jones, a Guardian columnist has said, “We need to show the world what millions of people in this country think of the bigotry and the hatred that he represents.”

Many have questioned the prime minister’s decision to allow this trip to go ahead, especially considering the worldwide shock and horror at recent immigration policies which have seen families separated at the Mexico-US border and children imprisoned in cages.

In preparation, police are planning the biggest mobilisation of officers since the 2011 riots, with around 4,000 police travelling across the country to contain the protest and protect Trump during his visit, including firearms officers and armed counter-terrorism units. One chief constable acknowledged that ‘more mutual aid is being asked for than the [London 2012] Olympics, than for the terrorist attacks last year’.

The main attraction is undoubtedly a six-metre high blimp of Trump which is due to fly over Parliament Square Gardens for two hours on Friday morning. Leo Murray, the activist behind the creation, has described the inflatable as ‘an obscene mutant clone of the president’ which depicts him as ‘angry baby with a fragile ego and tiny hands’, one of which is clutching an iPhone.

In order to get the orange baby balloon flying, more than 10,000 people signed a petition and activists crowdfunded more than £16,000. After some resistance from London mayor Sadiq Khan, it was eventually approved, with a spokesperson for Khan stating that ‘the mayor supports the right to peaceful protest and understands that this can take many different forms’. And this certainly is a form that we haven’t seen before.