It’s the largest sports tournament on earth, the World Cup. Over 3,2 billion people gather around their TV every four years rallying on their nation as they battle it out for sports greatest honour.

But many fans around the world who adore the game so passionately, are likely to be unaware of a far darker reality behind the game.
It’s a corruption played at unthinkable levels, so deep and systemic it has led to successive tournaments being stolen by several nations, kickbacks of every kind imaginable and a cast of characters that lead all the way up to presidential levels.

One person who has spent the last few years investigating this issue is American writer Ken Bensinger. In his recent book Red Card, Bensinger has painstakingly outlined a deeply disturbing tale which explores Russia’s involvement in stealing the biggest show on earth, FIFA’s corruption stemming back to the 1970s and why Donald Trump’s names pops up all over this.  We wanted to delve into the backstory to find out more.

How did you first find out about this issue behind Russia’s involvement in the World Cup 2018?

I began reporting full time on Red Card in early 2016 and began to travel extensively, meeting sources and gathering information about the case and its history. The original impetus to open the case in the U.S. was FIFA’s decision to award the World Cup to Qatar.

Enraged by that decision and wanting revenge, the theory goes, President Obama personally ordered an investigation. Another variant has it that Bill Clinton, who was chairman of the US bid for 2022, called Eric Holder, then the Attorney General, and asked him to open a case against FIFA. But after talking to many more people, and gaining insights from members of law enforcement, journalists, and others with actual inside knowledge of the workings of the investigation, it became apparent that wasn’t the story at all.

You talk about secretive meetings that were held in 2010 around hosting the World Cup what do we know happened in those meetings?

We don’t know very much. There was a small amount of press coverage of some of the meetings, and there was a memorandum submitted by the Times of London to a Parliamentary committee that detailed some of the concerns raised to the English bid, but because the meetings were behind closed doors, very little about them has ever leaked out.
Russia, appears to have gone to extraordinary lengths to ensure that nobody ever knows what happened during the course of its bid: when FIFA sent lawyers to Russia to investigate the bid, they were told that the computers Russia had used had been borrowed; that they had been returned to their owner; and that they had subsequently been destroyed. There were, the FIFA attorneys were told, no records left whatsoever.


Does this investigation lead you to believe that this isn’t the first time bribing FIFA officials to host the World Cup has happened? As in Qatar?

We know for certain from the investigation that Qatar and Russia are not the first World Cup hosts to receive the honour under dubious circumstances. Chuck Blazer, the former FIFA Executive Committee member and general secretary of CONCACAF, confessed to agreeing to share a $10 million bribe with two other football officials in exchange for their votes in favour of South Africa to host the 2010 World Cup.

Meanwhile, serious questions have arisen about the awarding of the 2006 World Cup in Germany. Law enforcement has been looking into multi-million dollar loan from an Adidas official to the German bid that may, in fact, have been money used to pay bribes needed to assure that Germany got the votes it needed (it ended up winning by one vote). 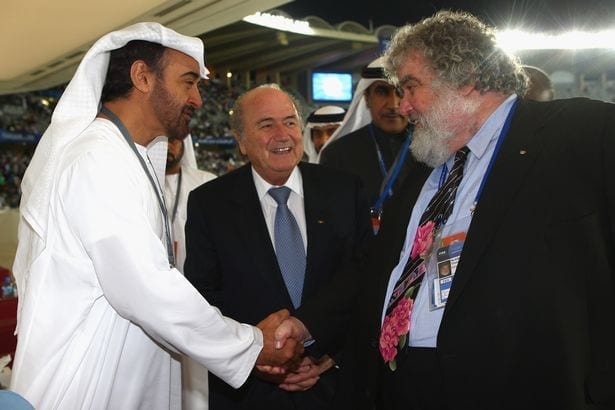 Chuck Blazer with the then FIFA CEO Sepp Blatter (FIFA 2009)

People like Roman Abramovic are implicated in this story. Has he commented at all about his involvement?

Abramovich, a man as reclusive and private as he is wealthy, was closely associated with Russia’s bid to win the 2018 tournament. He was spotted attending several FIFA events, working the room in a way that is extremely unusual for the billionaire, and spending extraordinary amounts of time with FIFA voters.

Also, a soccer academy associated with Abramovich was the group that loaned the computers used by the Russian bid, and that subsequently destroyed them to prevent scrutiny. Although he rarely speaks to the press, he and the officials of the Russian bid team have denied anything untoward happened.

In 2010 a case was opened by the FBI why did it become so hard to convict people?

I don’t think it was hard to convict people in this matter; of nearly 45 people charged in the case, more than two-dozen have been convicted, and most of the rest have never been extradited to the U.S., which protected them from conviction.
The harder problem, in this case, was gathering enough evidence to indict. Almost five years passed by from the moment the case was opened until the notorious arrests of May 27, 2015, and even by the standards of the Justice Department, which doesn’t act hastily, that’s a reasonably long time.

One of the key reasons for that is the American investigators decided, early on, that the case had to be conducted in complete secrecy and without help from law enforcement in other countries. They feared that because of the intense scrutiny football receives in many countries; there would be the risk of leaks, which could lead some of the targets of the investigation to go to ground, potentially forever.

FIFA has been at times described as a mafia organisation. How close are we to having cleaned out the organisation after seeing Sepp Blatter and co. removed?

I think FIFA is taking steps toward reform, but they are baby steps. The kind of corruption that plagues the organization dates back to the middle of the 1970s, with the arrival of João Havelange — Blatter’s predecessor — as FIFA president. The arrests, resignations, and bans that came as a result of the U.S. criminal case were a critically important step in the cleaning process, but only a first step. The culture is profoundly problematic, and several generations are waiting in the wings for a crack at positions of power.

Just as it happens in mafia organisations, we’ve seen it in FIFA: one generation of corrupt leadership falls, to be replaced by a new leadership that loudly proclaims a break from the past, and then proves itself to be just as dirty if not dirtier than ever. This is not to say that the new FIFA president, Gianni Infantino, is necessarily corrupt, but the fact remains that FIFA is still possessed of many officials who believe that the sport’s main purpose is to line their pockets. The changes and reforms to date are helpful and begin to push things in the right direction, but it’s folly to think that can change essentially overnight.

“There are a startling number of apparent links and crossovers to Trump in the FIFA case.”

This all seems eerily close to Trump’s circle of people and influence. Can you elaborate how?

There are a startling number of apparent links and crossovers to Trump in the FIFA case. For starters, the FBI squad that opened the investigation had already been working on a case involving an illegal poker room and online sportsbook that was partially run out of the Trump Tower when it received the tip about football corruption. In fact, it was that Trump Tower case that led the squad supervisor to travel to London where he originally met Christopher Steele.

The retired MI6 agent himself is an obvious Trump connection thanks to his famous dossier, compiled in 2016. But it was the relationship of trust he built with the FBI thanks to his hot tip in the summer of 2010, and the success of the FIFA case, that made his dossier seem credible to the Bureau. Without the FIFA case to establish Steele’s bona fides, it’s likely the allegations about Trump would never have been taken seriously.

Later, once the FIFA case was just over a year old, federal agents flipped their first cooperator, Chuck Blazer, who just so happened to live in an apartment in the Trump Tower. The future president had been a friend of Blazer’s since 1990 when he rented office space for CONCACAF at a discount. In fact, Trump even let Blazer use the atrium of the Trump Tower for his high school reunion a few years ago, and he was flipped by an IRS agent and an FBI agent in that same atrium. 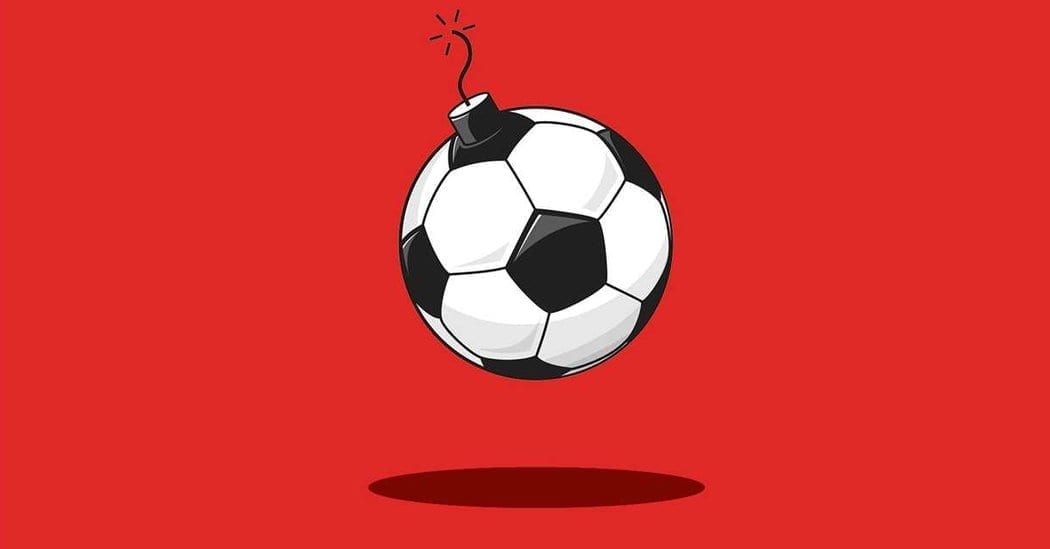 You say that FIFA officials were “engaging in various criminal activities, including fraud, bribery and money laundering, in pursuit of personal and commercial gain,” is there one particular thing that shocked you above all else?

Rather than one specific and petrifying act of corruption — and there were many of those — I think I was most surprised by how widespread and common the problem was. At times it seemed that nothing in the sport at any level seemed untouched by bribes, kickbacks and other types of bad faith. It’s not just voted on where to hold the World Cup; it’s television and sponsorship rights deals; contracts for what kit a national team will wear; what travel agency a continental confederation will use to book its flights, and even which players will appear in friendly matches.

It turns out many soccer officials have demanded bribes from promoters of friendlies to ensure that their national teams’ star players will suit up for the game. The shock here isn’t the specificity of the filth, but just how dispiritingly widespread it turns out to have been for decades now.

“At times it seemed that nothing in the sport at any level seemed untouched by bribes, kickbacks and other types of bad faith.”

Is Russia stealing the World Cup a continuing of their subversion of Western democracy?

It’s important, I think, to remember that at the time Russia was bidding to host the 2018 World Cup, it had a starkly different image internationally than it does today. This was 2010, a year into the “Russian Reset,” when Putin had moved aside to let Medvedev be president, while he served as prime minister.

Obama was praising Putin and they were finding ways to come to agreements over thorny international issues for the first time in memory. Though it’s hard to believe now, Russia had a somewhat warm and fuzzy image, at least compared to now. But flash forward to today, while Russia is having its long-awaited World Cup, and that perception has utterly changed.

In hindsight, it appears that Russia’s Machiavellian quest to win the World Cup hosting honours was an early sign, rather than a continuing, of Russia’s subversive policy goals. Russia’s quest to win over FIFA voters took place years before Crimea, for example, or Brexit, or the 2016 US presidential election. In that sense, it was, if anything, an ominous precursor of what was to come.

This interview has been edited and condensed for clarity purposes.

Red Card: FIFA and the Fall of the Most Powerful Men in Sports

is out now through Profile/Simon and Schuster books.