History is full of female figures that tried to shine a light on injustice from Rosa Luxembourg to Aung San Suu Kyi, history is also full of figures time forgot and one of these is Louise Michel, a free thinking French revolutionary who played a key role in the 19th century Paris Commune uprising. For her actions she was sent to the remotest part of the French Empire in Martinique.
Renowned Guardian writer, economics editor for Channel 4 News and most recently, author of PostCapitalism: A Guide to Our Future, Paul Mason’s latest mission has been to shed light on Michel’s plight but also to bear arms through the means of theatre. Having also launched the highly politicised play Why It’s Kicking Off Everywhere, Mason now prepares the London theatre debut of Divine Chaos of Starry Things . These plays actively encourage people to unite in what Mason calls these “dark times”. We chatted with Mason to discuss what made Louise Michel such a badass, a guiding icon for modern women and revolutionaries everywhere and why she would have most probably trolled people on Twitter. 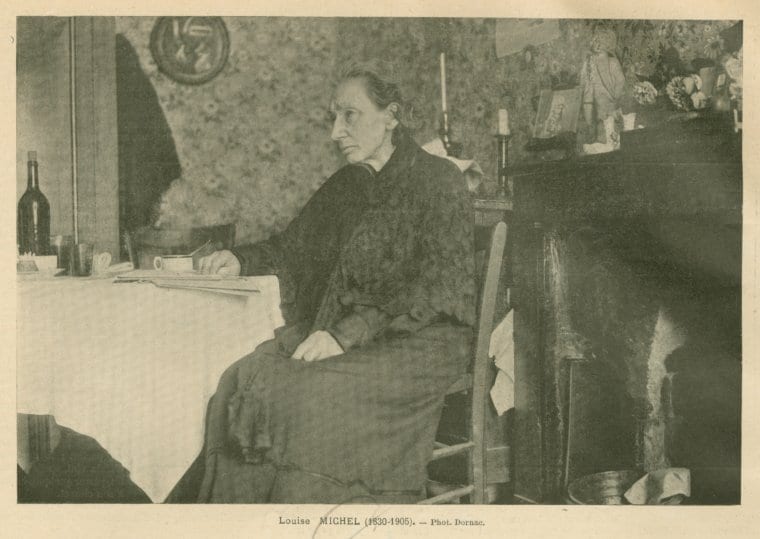 “She had the Donald Trump of the 19th Century, Louis Napoleon! She despised him, she mocked him.” – Paul Mason

One of the reasons we are talking today is to discuss the new play you are undertaking. You’re bringing to life a time and person that not many people know about and that was a seven year journey from what I understand?

So the play is about a group of working class women who take part in a revolution called the Paris Commune that was eventually defeated. I became fascinated by the universality of the experience they had of the defeat, because so many people in the modern world have experienced this life-changing transformation of taking part in an uprising and then seeing it all go to shit basically. My own family and friends were all involved in the miners’ strike in the 1980s, and when that happened, I knew many women, or ‘miner’s wives’ as they were then called, who could never go back to the way they were. And yet the transformative experience had gone and disappeared, and the world that it created had been destroyed.

So would you say that this play is a case of ‘look where we’ve come from to know where we’re going’?

It’s always that, everything that I do is that. In a lot of my writing there is always an aspect of the question of historical memory that is really important. I think we are living through a time where in the past 20 to 25 years, capitalism has tried to teach us that we are in a permanent and perfect present. And yet if we understand that the experience of revolt and defeat is an ever-present one, then we can understand that the current reality is not perfect and not seamless. Those of us who are living with these defeats, like the many Egyptians who made the Arab Spring, how do you do that and what kind of mental resilience do you need in order to get through it?

One of the things I worry about is how can we be a constructive force for good when to the other side it might look like an outpouring of liberal wining?

Well I think that there are obviously many injustices but the bigger problem is that the world is burning – the multilateral, global system that we created over 30 years, we may only have a few years to save it because of the rise of economic nationalism. Now in that situation, it doesn’t surprise me that the Left and liberal newspapers, the theatre, novels and the Internet, are just full of outrage, but you have to focus it and place it into proportion. 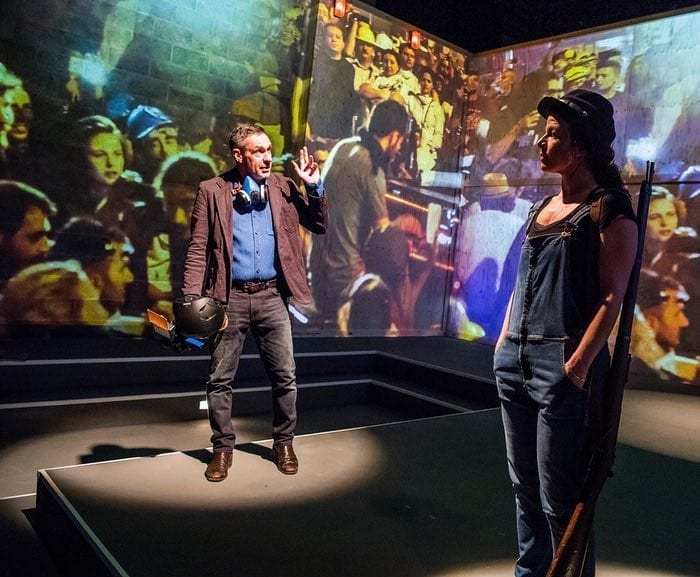 “The bigger problem is that the world is burning.” – Paul Mason

We’ve talked with a range of experts and they really seem split down the middle,  one side talk about the fact that a lot of this change is down to technological chaos and there is nothing we can do to stop that tsunami, and the other side talk about how people are just sick and tired of these stagnant institutions. How do you see it?

For me, in that debate, the key issue is agency – can ordinary people have agency? In the 20th and 19th Centuries, it was obvious that they could through labour movements, the organised Left, through working class culture. In staging the aftermath of a working class revolution, as in Divine Chaos with the Paris Commune, I’m all too aware of the fact that our society has moved past that; our society is full of very atomised individuals. And yet, the one thing that the women in the Paris Commune achieved was the thing that we start from, which is a high degree of personal freedom. We start from there but what have we achieved?

The real issue seems like we’re experiencing an existential crisis, not a political institutional crisis.

I mean I think it’s both. There is an existential crisis of the liberalism that has dominated for a while. But I trace the source of that to the dysfunctionality of the economic model; you can keep an economic model alive, as we have done through quantitative easing and central banking systems, that’s fine and that could go on for another decade or so. But in the mean time what’s happened is that the ideology has collapsed because you can’t make an ideology survive on life support – it has to make sense. So what happened with the Alt-Right, Trump, Le Pen and Wilders, is that people come forward and say ‘Look, this situation no longer makes sense, I have a set of ideas that make sense in the opposite direction.’

When you talk about mental resilience, would you classify your state of mind right now as angry?

No I wouldn’t. I mean I have a continual anger about the injustices of the world but that doesn’t get you anywhere. The job of a journalist is to calmly record what is happening. A journalist who wants to tell bigger stories and use the stage as a means of telling them also has to detach him or her self and try to understand their response. But for me, if you want a one-word description of my state of mind, I’m optimistic – I’m hopeful, but that is a hope that arises out of a very clear view of where we are.

You talked about Trump, Wilders and all these radical forces that seem to be coalescing, can we manifest enough change to suit the will of the people or is the next decade going to be quite a chaotic, dark time as some people seem to be foreseeing?

It’s a dark time but, I think it was Bertolt Brecht who said ‘In the dark times will there also be singing?’. That’s what I try to portray in this play, not just with Louise Michel but all the other women, is that ‘OK, I’ve been dumped in possibly the shittiest place on Earth, 10,000 miles away from the civilisation I grew up in, and I’m here for life. How do I escape? When do I escape?’

What do you think Louise Michel would think of Donald Trump?

She had the Donald Trump of the 19th Century, Louis Napoleon! She despised him, she mocked him, you know.

She probably would have trolled a lot of people. She admitted at her own trial that she would have assassinated key figures if she could have done it. Where her politics went was a form of politics that I worry about; if you suppress a generation and tell them, ‘Ok, your protests are all illegal, we fire tear gas at you, we batter you…’ then they go into politics and you say ‘Oh no you can’t do that, you can’t bring radical ideas of social justice into politics’, you get what happened with Louise Michel’s group unfortunately where they started advocating individual terrorism. But the people in power for the last 5 years have spent all their time suppressing, attacking and belittling protests in favour of social justice, and I think now is their time to turn around and say ‘Ok, we have a common enemy, people like Trump, Wilders and the racists, let’s do something to unite’. 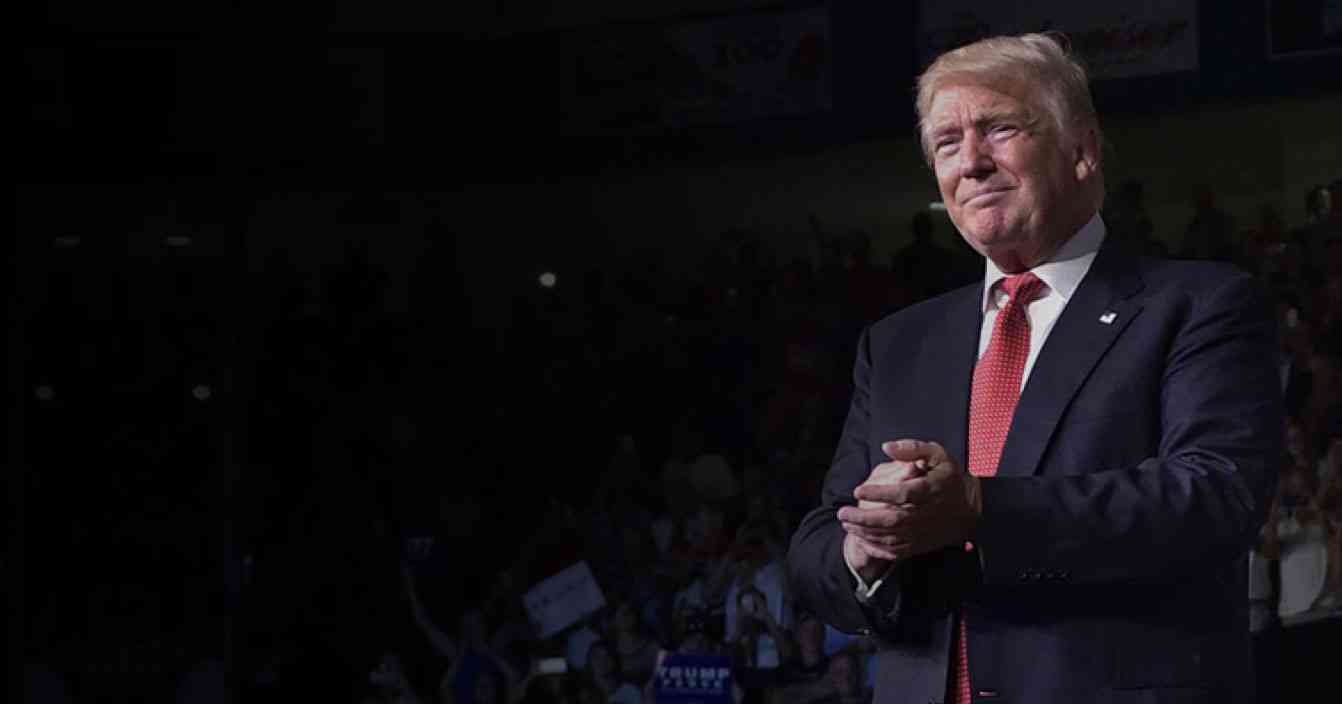 “The biggest mistake we made in the 1930s, if you dig out all the liberal press from the time, they said Hitler was a joke.” – Paul Mason

Lastly, I want to revisit this point because I feel that you have so much passion and these theatre pieces are almost your way of taking up arms. The 18-34 generation has so much outrage and so many ideas about how the world should be, but one of the things that has happened now is that we embolden ourselves with these tools to share our beliefs, like social media. So how do we get out of this comfort zone and take action?

I see what you mean. In Divine Chaos what we ultimately see is a group of people choosing to put their bodies in the way of harm, and I think that some of the 18-34 generation have lived in bubbles, never putting themselves in danger. It’s like that old saying ‘First they came for the Communists and I did not speak out’, well this time they are going to come for a lot more than the Communists and the eco warriors – Trump is gonna come for 11 million migrants, Le Pen is gonna come for 4 million Muslims in France.

Do you really think so? Do you think their rhetoric is genuine?

Absolutely. The biggest mistake we made in the 1930s, if you dig out all the liberal press from the time, said Hitler was a joke, he doesn’t mean it. Do not underestimate these people. So yeah, if my plays are an alarm call, I am absolutely happy to have them described as that.