Quantum computers may revolutionize society in a similar way to the emergence of classical computers. Once built, their capabilities include the potential to answer many questions in science; create life-saving medicines; provide transformative capabilities for the financial sector; in general, solve some problems that an ordinary computer would take billions of years to compute. There are some fanciful estimations that quantum computers could be up to 100 million times stronger and faster than your average desktop today. We just don’t know answers to a lot of these questions yet. 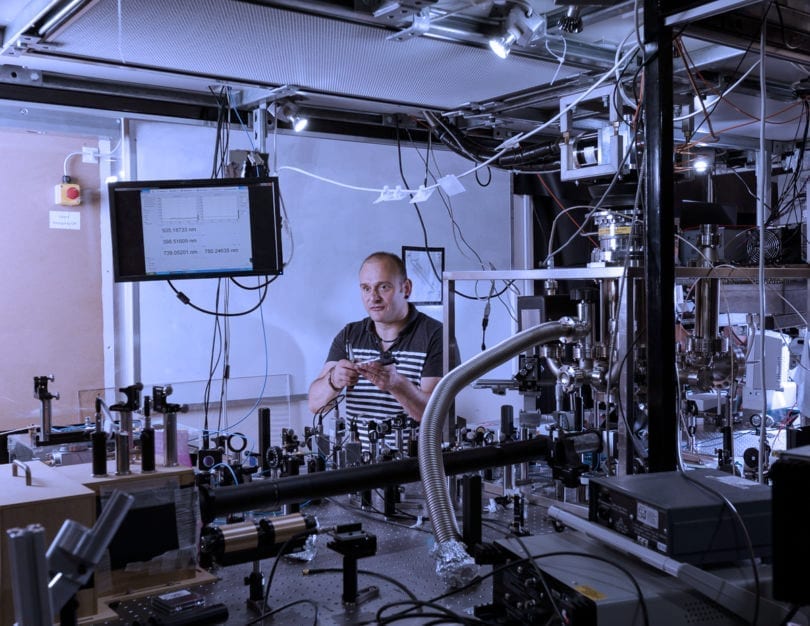 It is very difficult to estimate the full impact of quantum computers, as we are only at the beginning of developing a new class of algorithms that may run on such a machine. However, one thing is clear: nature works according to quantum physics, so quantum computers may be the very best tool possible to understand nature and as such the fabric of reality itself.

In order to understand what we have done, let’s start by explaining how a quantum computer actually works. Quantum computers are unbelievably sophisticated technology that have the ability to ‘tame’ quantum effects in order to reach tremendous computational power. So what are quantum effects? There are a number of quantum effects. One of the most important ones is that an object can be in two different places at the same time.

“Quantum computers may revolutionize society in a similar way to the emergence of classical computers.”

Yes, you heard right! Quantum theory predicts an object may be at two different places at the same time! What does that even mean? Does this enable me to have a holiday in sunny California and at the same time write this article? Not quite, however, it means one can conduct an experiment where an atom is at two different places at the same time, and this is exactly what physicists around the world have managed to achieve in numerous experiments. However, such experiments are very difficult because even the slightest contact of an atom exhibiting quantum effects with anything else will make such quantum effects disappear – immediately.

For many years, I have seen smiles or disbelief in the faces of some of my scientist colleagues when telling them about our intention to build a large scale quantum computer. With tremendous progress in this field in the last few years, things have changed a little bit with more and more people starting to believe it may actually be achievable to build such a machine. We felt the need for some kind of plan of how to actually build such a device (instead of just focussing on academic studies).

The mission would be to come up with the simplest technical solution possible and to make use of proven technology wherever possible. Most importantly, to identify the most important engineering challenges and deliver credible solutions. In order to make this happen, I enlisted some extremely talented scientists from around the world to help us to draw up such a blueprint.  Over the past few years, together with leading scientists from Google (USA), Aarhus University (Denmark), RIKEN (Japan) and Siegen University (Germany), we asked the question, what would it take to actually build such a device? We did not just want to write another academic study. In contrast, we set out to create an actual construction plan, the engineering blueprint, to build such a device. How big will it be? What is the power consumption? What parts does it require? What kind of cooling does it need? What is the easiest way to make it fully modular? How much will it cost?

We answered all these questions in an article published in Science Advances. Providing all these details was a very tedious process, however, it provides the answer to the most important question: can such a device actually be built? And while we still believe it will be quite an engineering feat, tremendously expensive and requiring a lot of people, I think it is fair to say that we believe the answer is yes.

We aim to combine a whole range of reasonably proven technologies to make a blueprint that consists of a construction plan with sufficient technical detail, so we are very hopeful the construction of a large scale quantum computer is not the stuff of science fiction movies anymore.