As a culture, we’re always on the lookout for a hero with the right moral compass that exudes a certain bravery and spirit—someone who able to task even those who seem infallible. The late Molly Ivins might be that person, the subject of a new acclaimed documentary, Raise Hell: The Life & Times of Molly Ivins to be released in late October, but I have to admit I had never heard of her.

Ivins was a Pulitzer Prize-nominated journalist, and a best-selling author, one of whom managed to change the face of journalism in America at a time when a chorus of male voices largely ran the newsroom.

Her work, is now more profoundly relevant than ever, charged with an energy of satire and a polemicist echoing writers such as Christopher Hitchens and Barbara Ehrenreich. She routinely annihilated those drunk on power with a wink or merely just a phrase, at one point 400 newspapers carried her words across the nation.

Her pedigree was built up within the staunchly republican and overtly Christian state, Texas, and described herself, as its “resident reprehensible communist.”
One can only imagine the misogyny that she had to put up with throughout her working life, almost everywhere she turned in the writer’s room, and congress were white cliquey men.
What you take away from this unique portrait of a woman, packed into a neat 90 minutes, is that she managed during her career to put forth a noble savagery and humour that demanded your respect. Never shying away from a skirmish, her words never toned down to suit any editor, that included the NY Times legendary Abe Rosenthal.

To her own detriment, she saved her biggest target in her career for the 41st president of the U.S., George W. Bush, or as she affectionately called him Shrub or Dubya. One of the first to stand up in her own state to the Iraq war, she penned vitriolic biographies of the man, Bushwhacked was one of them. She was quoted as saying, “Next time I tell you someone from Texas should not be president of the United States, please pay attention.”

She never once fell for Dubya’s charm, instead, paving the way for a new generation of seething liberal/op-ed writers like Paul Krugman, David Brooks and George Monbiot who would carry the Ivins torch into the 21st Century. Eerily she foresaw the cancer in the republican party that was the hyperpartisan, anti-intellectual energy that would eventually birth the Donald J. Trump party.

You realise after seeing this documentary that she is someone who is sorely needed in this turbulent political climate, someone who can stand up at 6 feet and no shoes on, (yes, that was her trademark) and fire off pot shots that were hell raisingly funny and packed with disarming wit aimed at the princes masked as thieves. 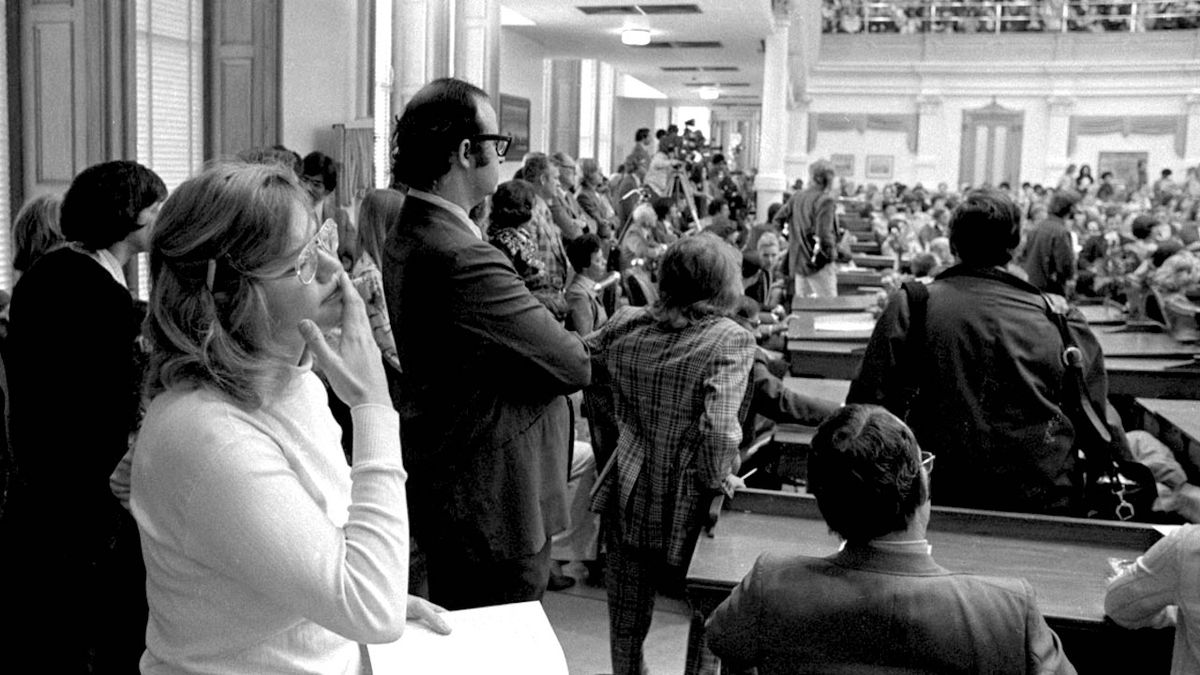 Molly Ivins in the Texas Senate

The line that carried the most weight for me was from a TV interview she did in 1994 on CNBC, “Most people think the political spectrum runs from left to right, but actually it runs from top to bottom. The top 1% hold 40% of the wealth in this country.”  Molly Ivins died of cancer in 2007 and spent most of her life married to the bottle. Something tells me that her legacy ought to live on or that more people should know about her, especially in a climate where people are afraid to speak their mind.

If you’re allowed to see this movie in a cinema come October, seek it out. It’s perfectly timed for the US elections come November 22nd, all the shenanigans and games that Trump will hatch on Biden is really something that Molly Ivins foresaw, a political prophet of the ages? It would seem so.

Raise Hell: The Life & Times of Molly Ivins is out for streaming in the UK on October 23rd.