Veteran filmmaker Alex Cox has had a career most indie filmmakers would die for. Starting out as a student at UCLA in 1977, he wrote his first feature film Repo Man as a moonshot in 1984. It went onto become an instant cult classic and was followed up in 1986 with Sid and Nancy, the fictionalized account of the greatest punk rock romance in music. This year celebrates the 30 year anniversary of the celebrated biopic, starring Gary Oldman and Chloe Webb. We sat down with Cox to discuss his DIY seminal career, including his tango with the drug induced Hunter S. Thompson, revealing that Daniel Day Lewis could have been Sid and why he hates looking back at his films.

You’ve had quite a career in film, making some of the memorable cult films of the last few decades. How do you look back on a film like Sid and Nancy 30 years later? Or you don’t watch them at all?

I don’t watch ’em. Poring over one’s old work is a sign of madness or senility, probably both.

You’ve been called “an iconoclast pursuing his own anarchic vision.” Is there a part of you that ever wished you had compromised with the Hollywood machine?

There’s a part of me that wishes I’d received an honest accounting of Sid and Nancy from MGM, as I could certainly do with the money. But Jeremy Corbyn and Bernie Sanders supporters would also like an honest accounting, and much more is at stake there. So mustn’t grumble!

Do you think films like Repo Man and Sid and Nancy could get made today?

Repo Man, probably not. Sid & Nancy, why not?

Apparently Courtney Love originally wanted the role of Nancy. What are your thoughts about the eerie real life “Nancy” she became?

I don’t know Courtney well enough to comment on her activities post-Straight to Hell! When I knew her she was an aspiring actor, and a very good one. This was a while ago.

The death in Sid and Nancy is based on speculation because the family never released the autopsy results. Was that frustrating for you? Or did it give you more license for creativity?

It would certainly have been interesting to know more about that, from a screenwriter’s / punk-historian view. But families are entitled to keep such things secret, which is no doubt a good thing.

Apparently Malcolm McLaren and John Lydon both criticised the film, John Lydon especially. Have you had words with him since about that?

Lydon was very kind to us, talking to me about his character, reading the script, giving us notes, and inviting Drew Schofield – who played “Johnny” in the film – to New York to observe him. He was a gentleman throughout. Where is he now that the thirtieth anniversary of punk is upon us? Why isn’t he being carried through London in a sedan chair?

McLaren was also generous with his time and talked to me about his experiences – I don’t remember if he saw the film or not, but he and his wife came and stayed with me at my little house in Almeria some years later, so I don’t think he can have been too offended!

Gary Oldman apparently didn’t like his performance and wasn’t originally interested in playing Sid. What were the initial conversations like when you were trying to rope him in and also years later?

Gary was desperate to get the role. Over the years he seems to have given interviews in which he claimed to have initially rejected the part. This is untrue. Perhaps his words were misinterpreted. If Gary hadn’t been keen on the role, we would have offered it immediately to Daniel Day Lewis! 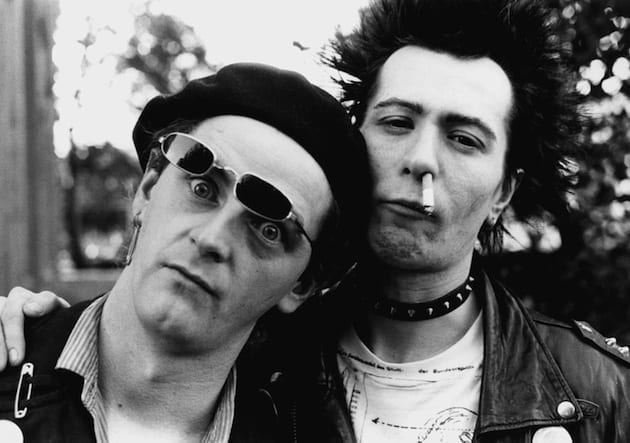 Repo Man was over 30 years as well. it must have been amazing working with such a legend Harry Dean Stanton. Any anecdotes you can share with the great man?

I was 29 when I wrote and directed Repo Man. Harry Dean was 58. I think he had some problems being directed by someone half his age. This was unfortunate, but he gave a great performance, didn’t he?

The freedom to create interesting art house films are scarce these days. Do you have any favourite cult films in the last decade or so?

I liked Holy Motors and A Field In England. Good films!

You also helped write the screenplay for another classic Fear and Loathing in Las Vegas. What was that experience like? Did you get to work with Hunter S Thompson at all?

I wrote the screenplay with Tod Davies, and cast Johnny Depp and Benecio del Toro in their roles. The producers then took the project to Universal. I was fired off the picture and they all got a much bigger payday. Thompson was a basket-case – drunk, on drugs, obsessed by the television, unable to remember the book or Steadman’s illustrations. It was a shame that the crowd around the film encouraged him in his misery rather than trying to get him into rehab.

What are you working at the moment and what inspires you these days?

A Western titled Tombstone Rashomon, telling the story of a famous Western gunfight from six different perspectives. It was shot in Arizona earlier this year and will – with luck – be finished by the end of the year. The beauty of our wonderful planet and its incredible fauna and flora inspire me every day!

‘Sid & Nancy will be released in cinemas today and on DVD/Blu-ray on 29 August.