Iceland is a place that you didn’t think existed. An island nation of 103,000 km² that possesses such vast natural beauty that it challenges whatever ideas you had left of picturesque getaways. But here north and we mean north of the equator, a Nordic nation is quickly transforming itself into the go-to tourist destination for the rest of the world. For a country with just under 350,000 people, 3 + million tourists travel there every year. That’s ten tourists for every native. 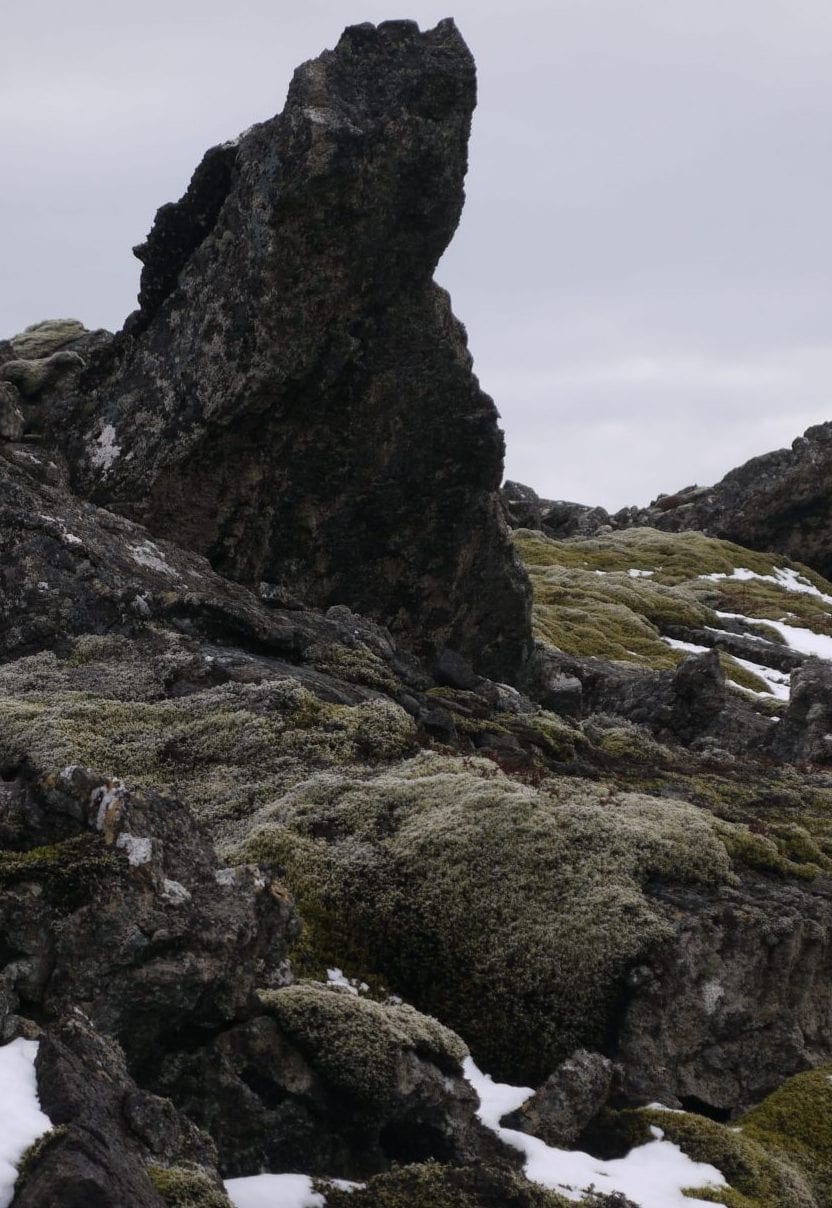 Part of the allure of Iceland is its proximity to North America and Europe, Iceland has used a slogan for the better part of the last ten years, ‘it’s closer than you think’ to attract hordes of tourists and it’s worked to their benefit.

Almost overnight, Iceland was uncovered by the rest of the world. What happened? The 2008 financial crash is what happened. After Iceland broke in two, it needed a new industry to survive, and tourism came to its salvation. It’s weakening currency forced the floodgates to open, in fact so much so; tourism has moved into first place as its countries main export.

Besides the Game of Thrones, what people love about Iceland is it’s unpredictable aesthetic,  in 2010 Eyjafjallajökull kicked off, shutting down the global aviation industry, kind of badass. Now that they’ve put that behind them, they’re waiting for a massive earthquake which would rip the country in half. It’s all very Attenborough’ish in a way.

Amongst this bizarre contrast, their art, music and design scene is exploding from its Coachella styled music celebration Iceland Airwaves to its exploding drag scene. If you ask a local, they will describe the Icelandic cultural scene as inherently unique. Ólafur Daði Eggertsson who sings for a well-known cover band who opened for Sigur Ros at their New Years Eve show in 2017 told us, “There’s not much of a market for music or art in Iceland, due to its tiny population, so you mostly make things for yourself and your friends. Perhaps that’s where the originality comes from, the play and experimentation without any expectation.” 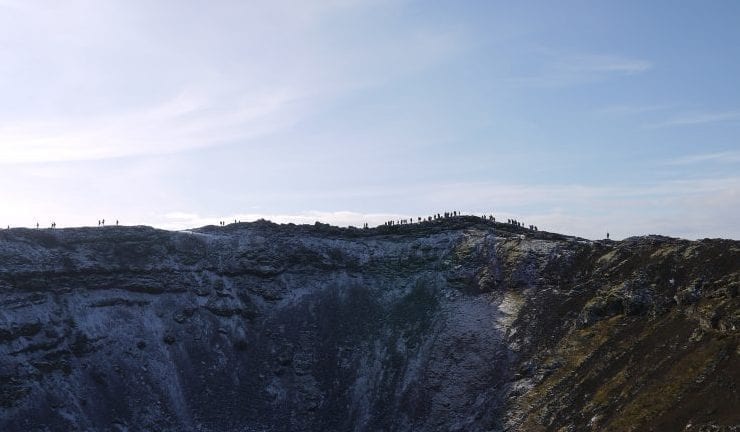 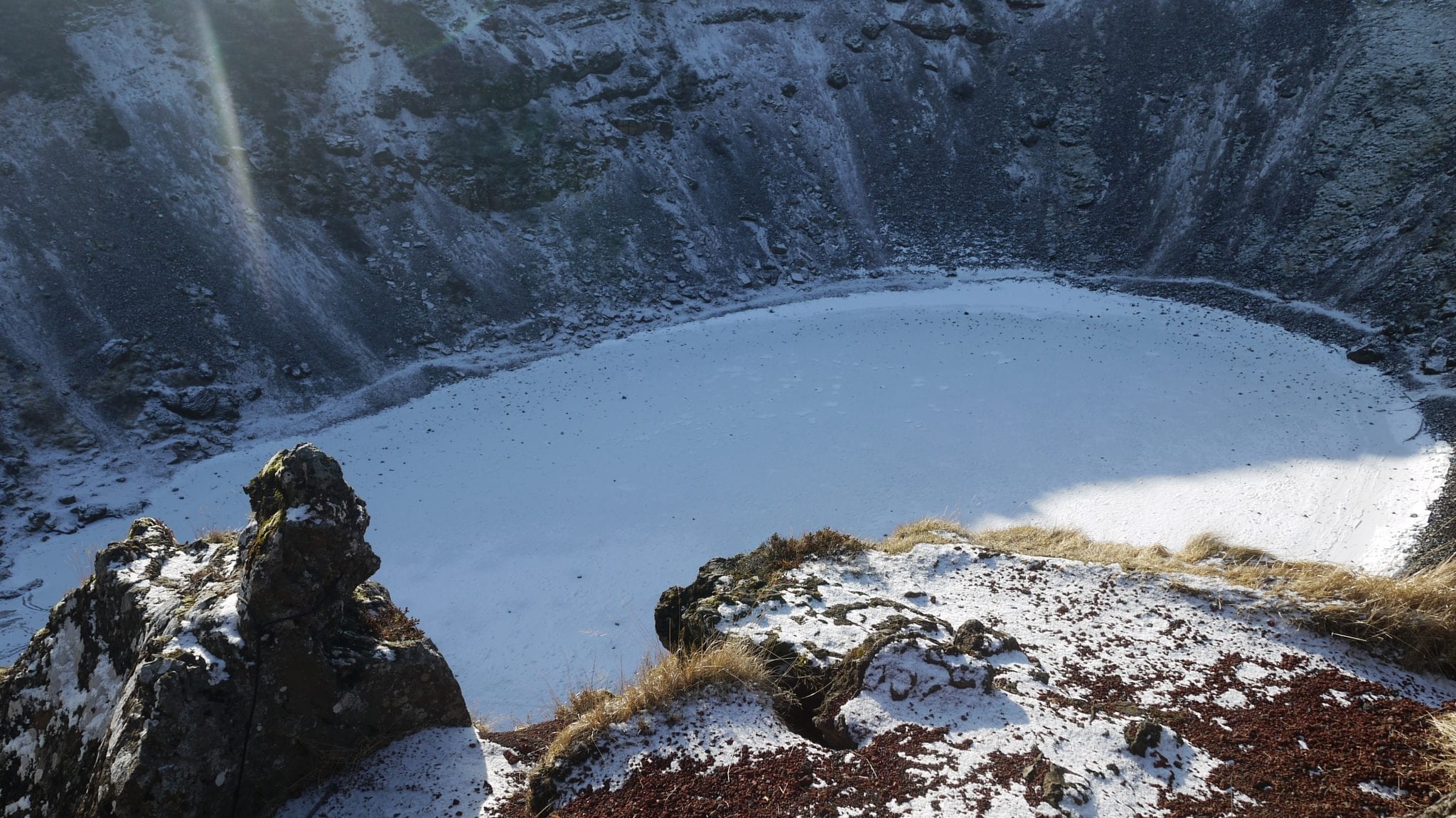 But there’s something wildly unique about the culture of Iceland, it sits somewhere in the vicinity of mythical Norse and young and experimental,  they possess unique eccentric directors like Dagur Kári & Grímur Hákonarson, inventive musicians like the late Jóhann Jóhannsson & aYia and of course the famous performance artist Ragnar Kjartansson who are all eclectic & independent in their own way, it’s something that is encouraged here.

“Their culture is somewhere in the vicinity of mythical Norse but super young and experimental at the same time.”

But it’s the nature that takes centre stage here; it forms the mantlepiece of their country. Travelling through Iceland oddly feels like walking through one giant Aesop store. With their intelligent and sustainable design ethos, that clean Scandinavian pot pouri/atmosphere that you’ve just walked into, reams of moss perched all around you and those dramatic greens and blacks contrasted against each other. 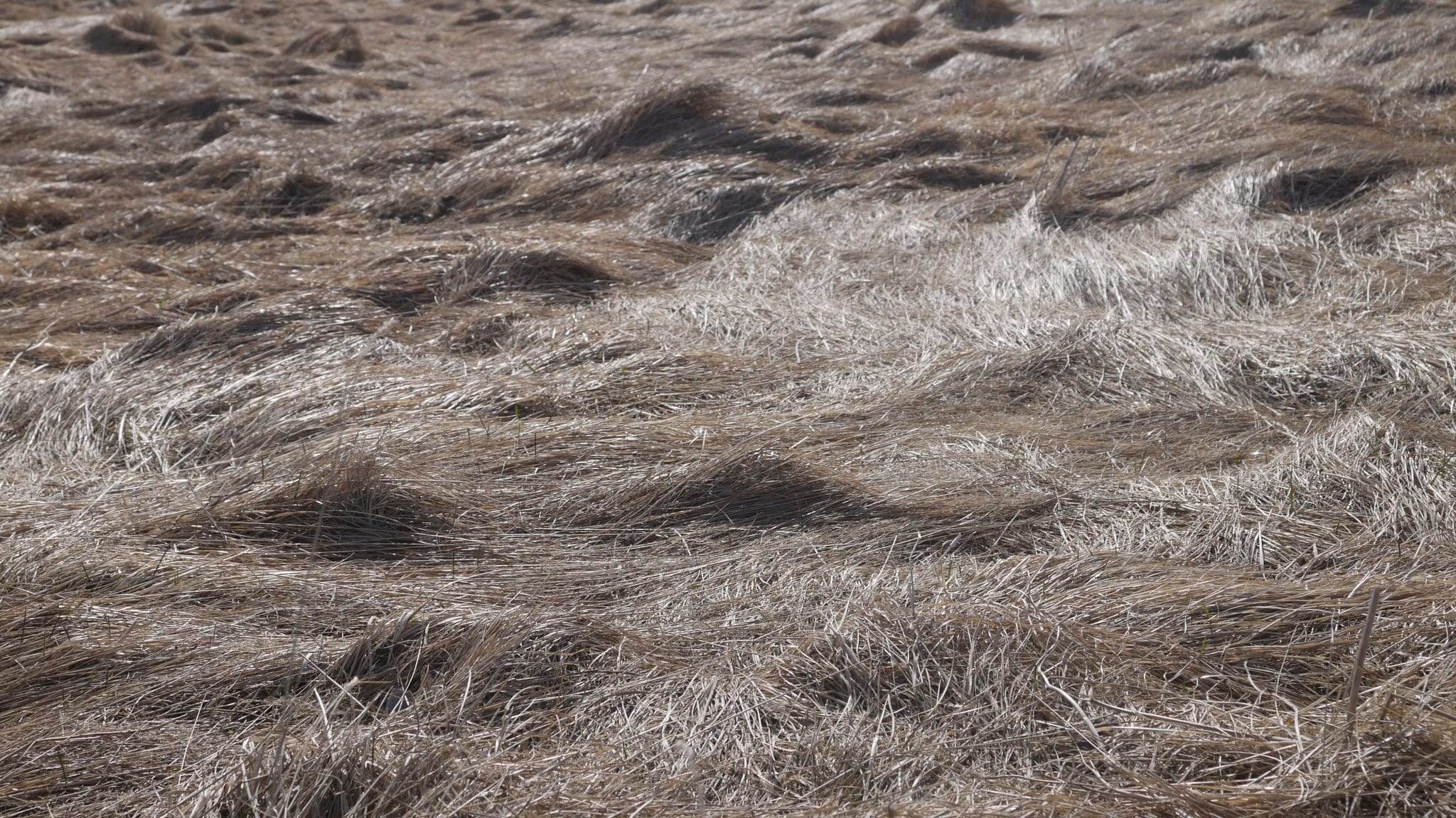 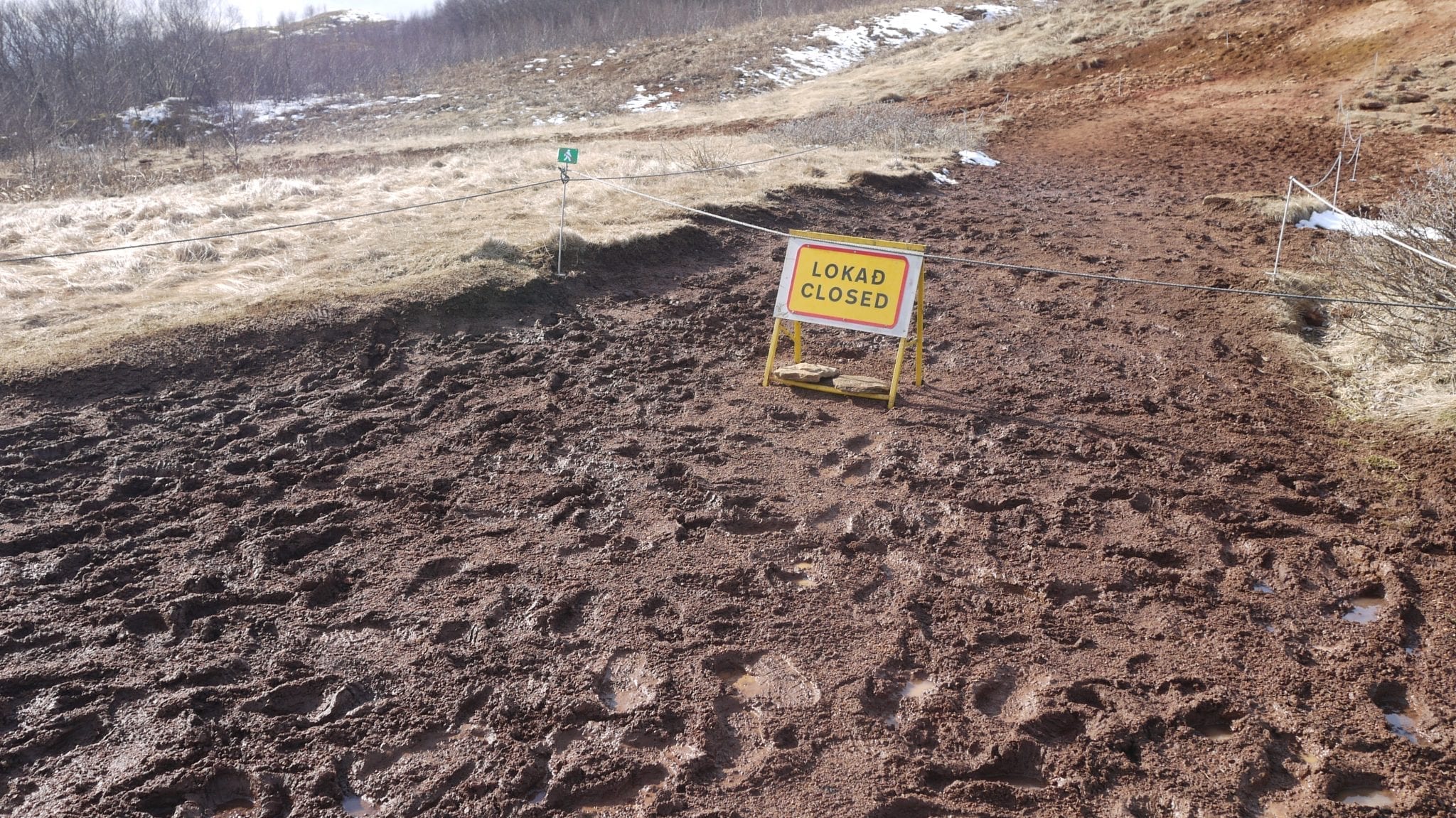 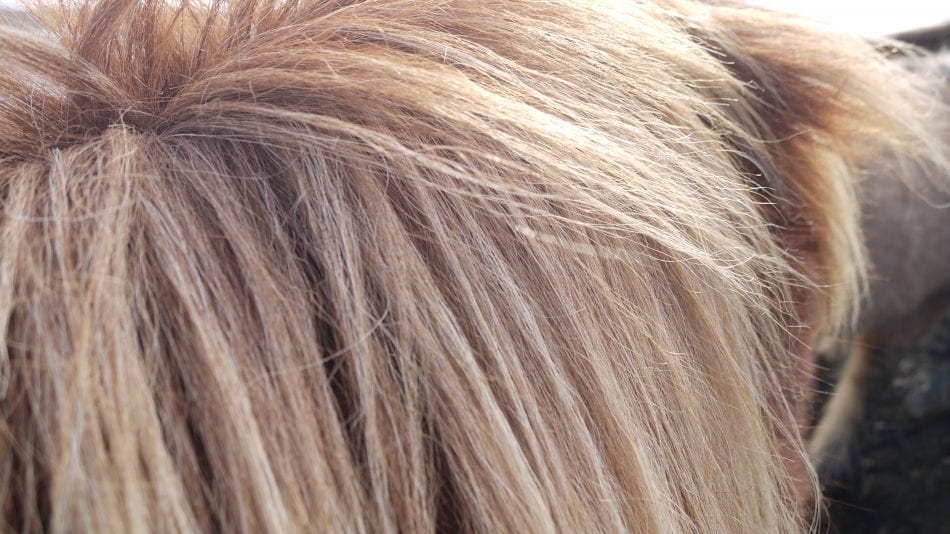 You do notice a subtle tension here, you feel it in the streets, bars, clubs, tourist traps, restaurants, and attractions.  There is an extreme fragility to the landscape and is protected by the ethos of the nation. But it feels like this fragility hangs in the balance as the tourism masses continue to come.

If Reykjavik is your only destination then you’re sure to hit its extended tourist sites, the Golden Circle and the Blue Lagoon, it’s two most popular attractions which are part of ‘the circuit’. It will include a peek at the Gullfoss Geysir and the local National Park. Unfortunately when you’re surrounded by a ton of tourists who sound like they’ve just come off a Universal Studio themed ride we recommend taking a car and getting off the circuit — travelling to one of the other eight regions of Iceland like the West and North. 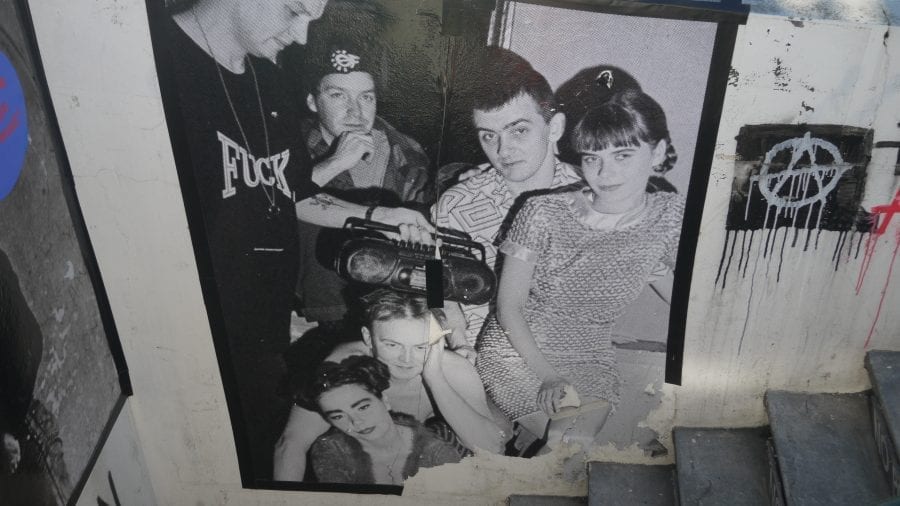 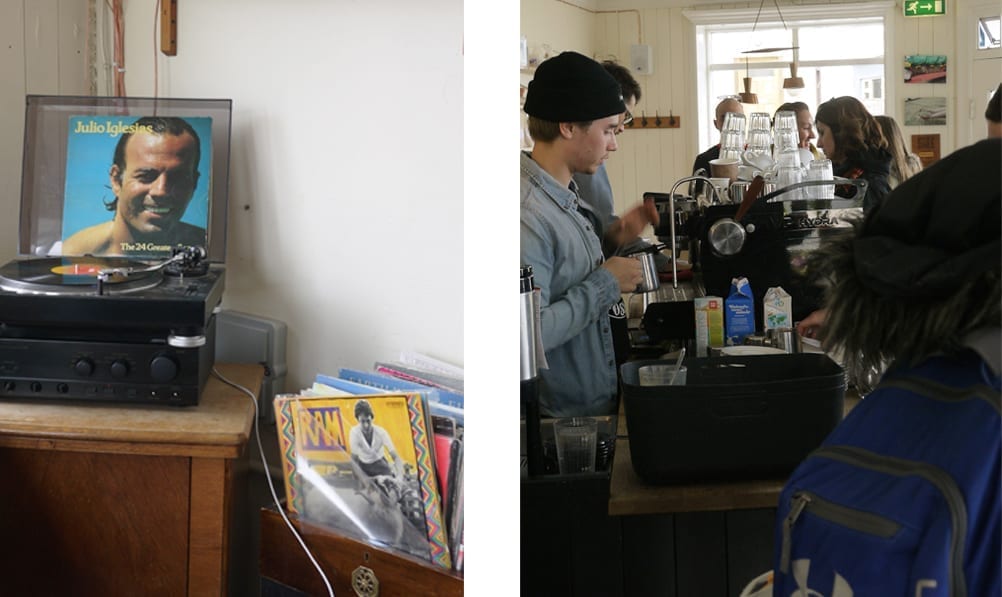 Both options require a certain type of education or messaging which unfortunately we didn’t find that prevalent.  When you open up a place of extreme beauty, you offer it up to the gods of gentrification and exploitation. We hope that Iceland can strike a balance between cool, protected and unique and progressive all at once. Sigríður Dögg Guðmundsdóttir, Manager of media relations at Visit Iceland/Promote Iceland told us Iceland is changing fast, it’s turning from an isolated nation to a cosmopolitan outpost of Europe where nature and its protection is all part of an ongoing debate in parliament. The new government is intent on creating a new long-term tourism strategy to generate more awareness.

It’s of little interest to the outside world. Still, since 2008 international corporations have been trying to buy up its natural resources and superhero icon, Björk has been fighting these interests very publicly.

“When you open up a place of extreme beauty, you offer it up to the gods of gentrification and exploitation.”

These types of discussions are all being had at the locals favourite past times, the hundreds of thermal pools that dot the city and country.  We fell in love with one in particular Vesturbæjarlaug. Apparently, this is where the locals hit it.  Iceland makes sense when you’re sitting in one of these local pools. Naturally heated from the volcanic activity going underneath your feet,  it’s a nesting site for the natives, they sit there for hours upon hours, sharing stories and socialising, no alcohol just chilling and interacting with each other.

It feels super healthy, remember they have the longest lifespan in the world second only to the Japanese. One minute you could be discussing volcanos with a glaciologist, an Indian ex-pat, the next a local Icelandic waitress who travels back and forth between her home city and California. It’s like a giant local pub or outdoor gathering. 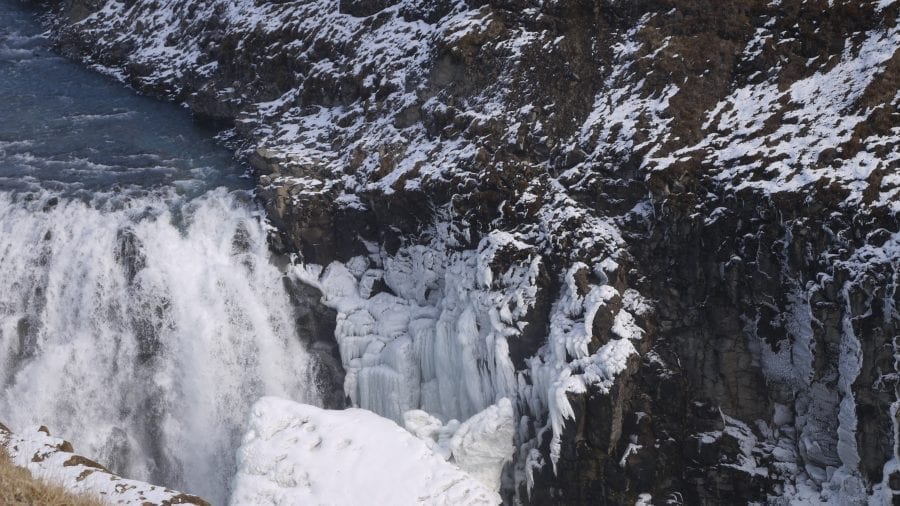 If you want to experience a piece of the local modern Icelandic cuisine head to the newly revamped Holt in Reykjavik, or Hverfisgata 12 for Iceland’s best pizza, they both form part of a local consortium, with Michelin starred Dill being their pride and joy. Holt’s food is fancy enough to impress but not fancy enough to make you feel intimidated. Created by the adventurous Ragnar Eiríksson former chef of Noma, his dishes are romantic, textured, damn tasty and full of colour. If you have the dimes, make sure you invest in the wine pairing, the sommelier is incredibly knowledgeable and forms one of the best parts of the evening. 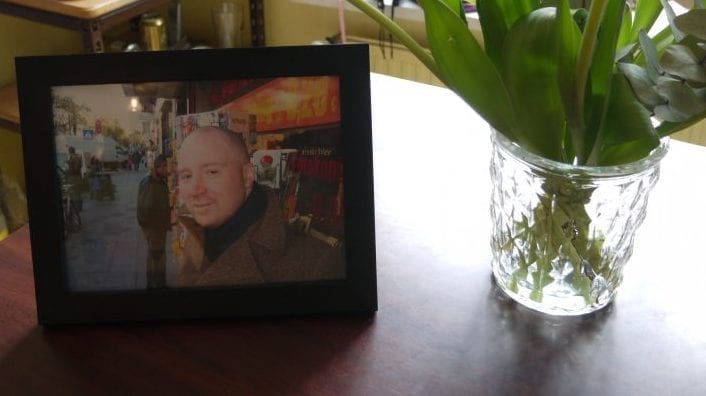 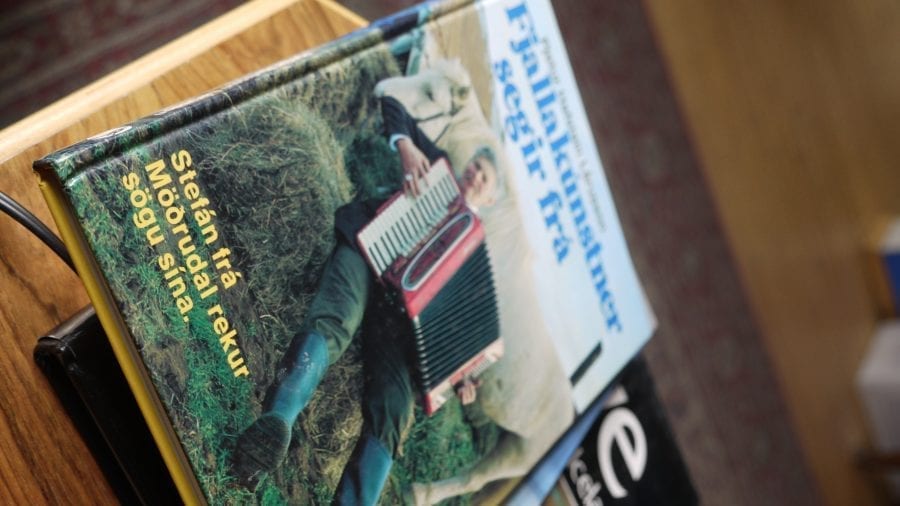 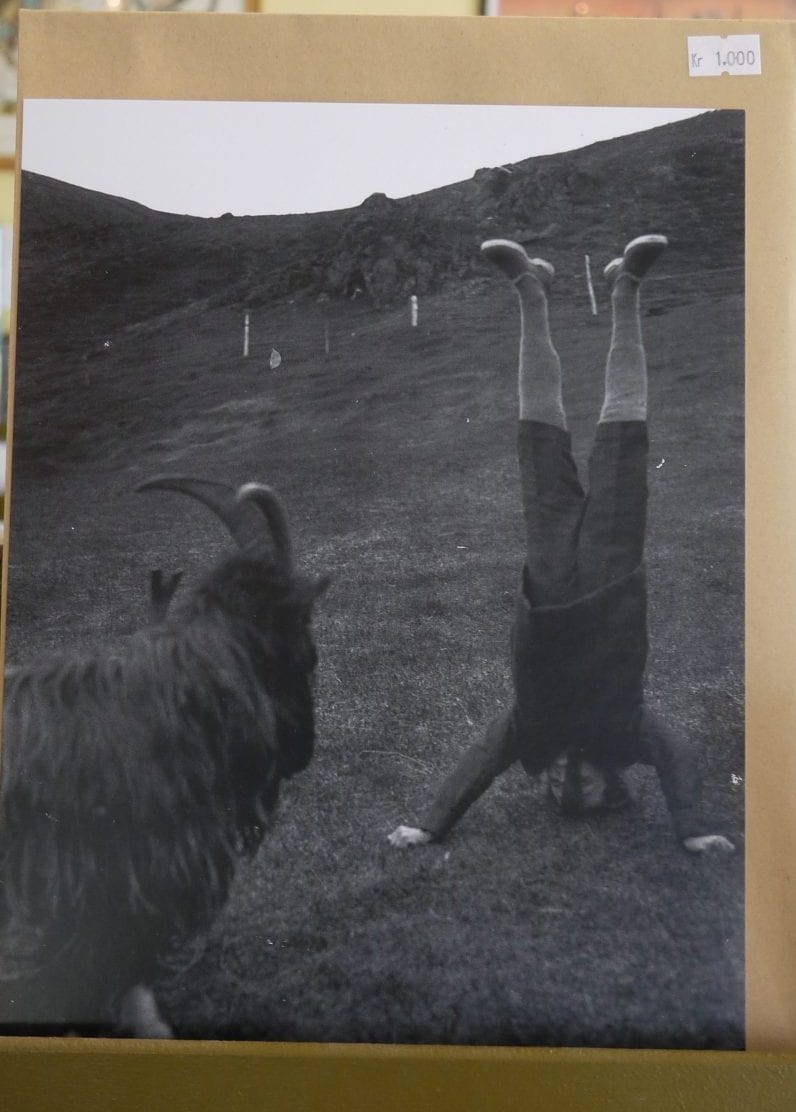 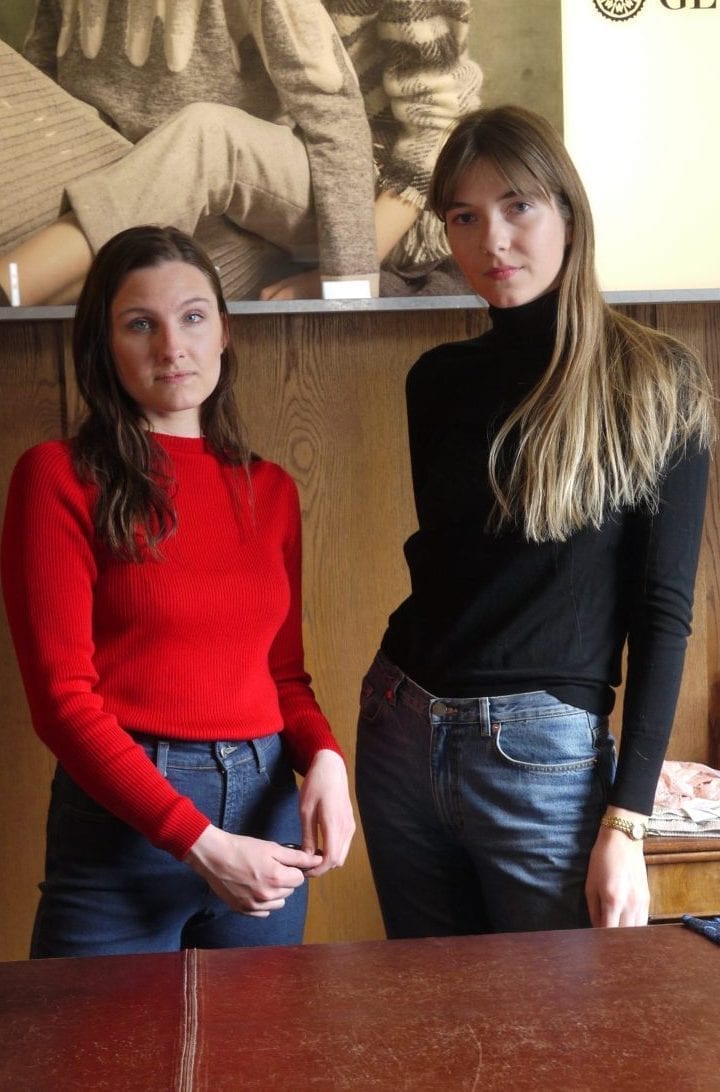 If you want somewhere fun to stay make sure you rest your head at the Wes Anderson inspired Oddssoon hostel, it feels like one giant 70s themed elevator, their views are deeply inspiring overlooking Faxa bay. Located in a 1940s former supermarket warehouse, minimal Scandi design permeates throughout, be it in the restaurant, bar, rooftop hot tubs or bespoke karaoke room.
Our shared bathroom is finished with turquoise tiles, pastel blue floors and a row of saccharine-pink sinks that lend the space the appearance of a 1950s bathroom. Oddsson was conceived by Icelandic design studio Döðlur and their intention was to meld the 20th Century with the 21st. They have done an amazing job and it’s not too pricey. This is one of the most ornate and unique hotels we have ever stayed in. 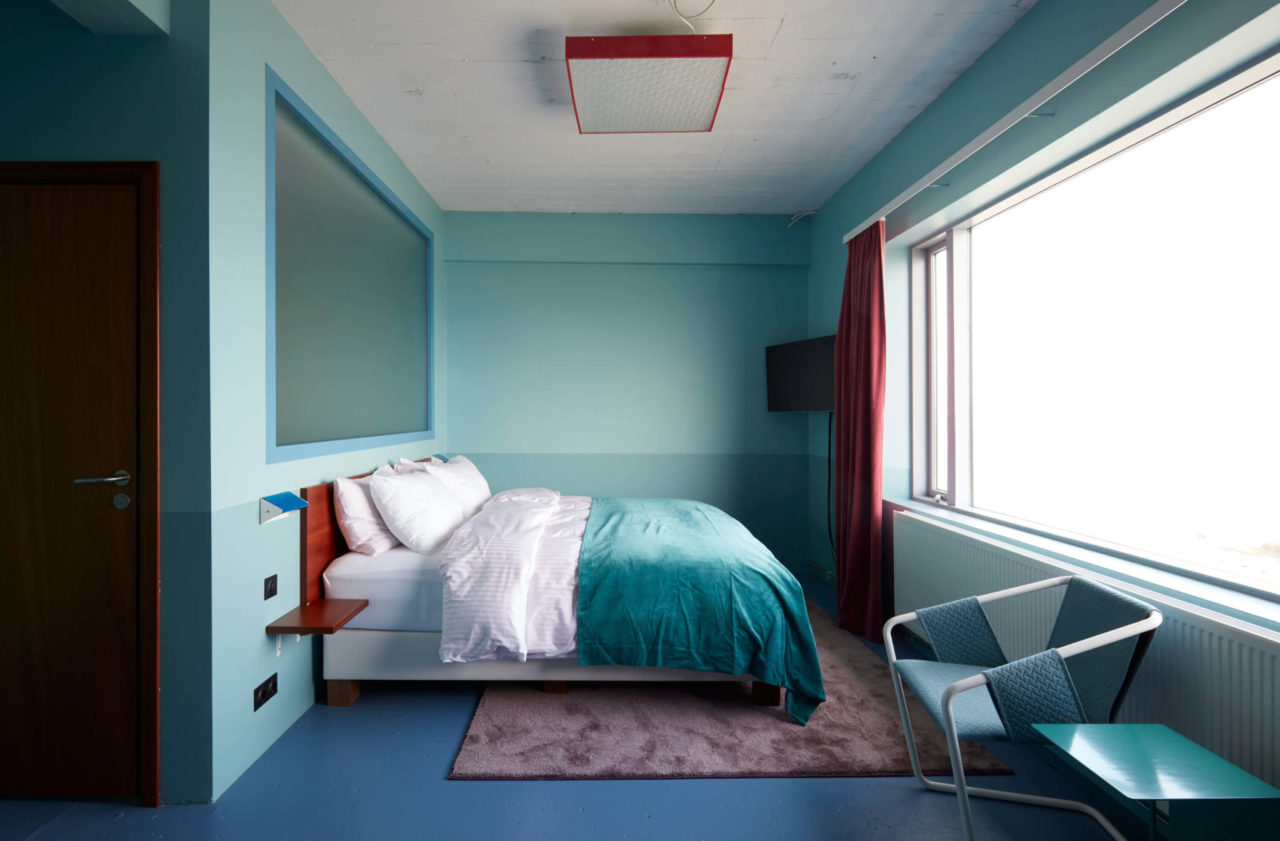 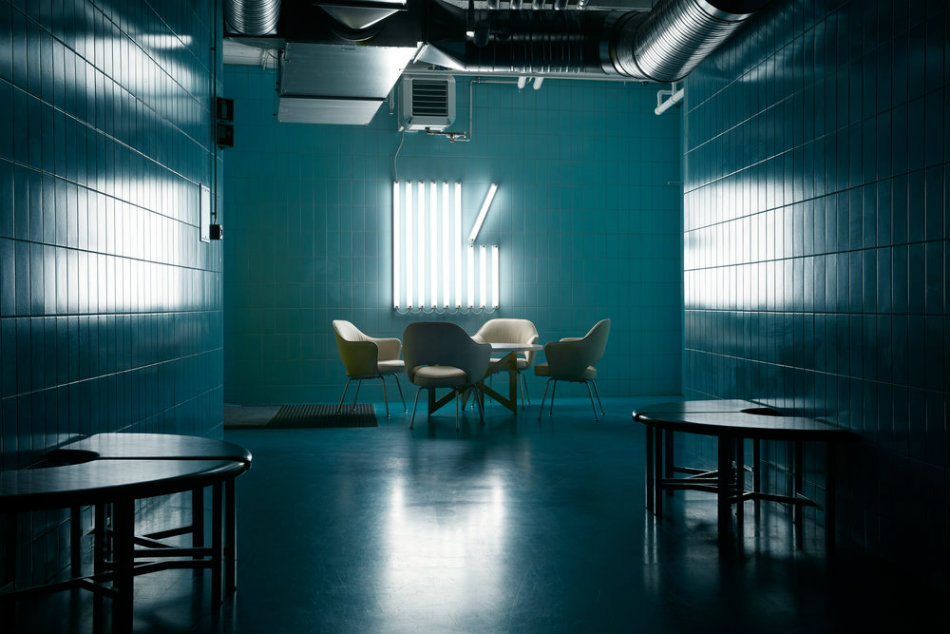 With all that being said, Iceland remains high on our list of countries to return to, but we feel it needs to think and long hard about how to manage the expectations of its tourists as it continues to unravel. We adore its culture, sights, and people. But we’ve seen it happen to Brooklyn, Berlin and East London, that idealistic compromise which unfortunately changes the face of a city & country forever.

A huge thanks to Ólafur Daði Eggertsson for helping us out on this trip.