In one of the most exciting scientific discoveries of the last few years, scientists have confirmed the discovery of what is the nearest star to the Sun with Earth like qualities. Called Proxima Centauri b, it is 1.3 times the size of Earth and could potentially hold atmospheric properties, such as liquid water, ultimately enabling life. This has excited people like Russian entrepreneur and billionaire Yuri Milner, who alongside Stephen Hawking, has launched the Breakthrough initiative in 2015, setting out to explore this area of our solar system with a host of conceptual new technologies.

We spoke to one of those original discoverers of the planet, Guillem Anglada-Escudé of Queen Mary University of London to find out the significance of finding such a planet. Does this mean we should all be packing our bags for Promixa b in the future? That is considering it would take 10,000 years to get there. 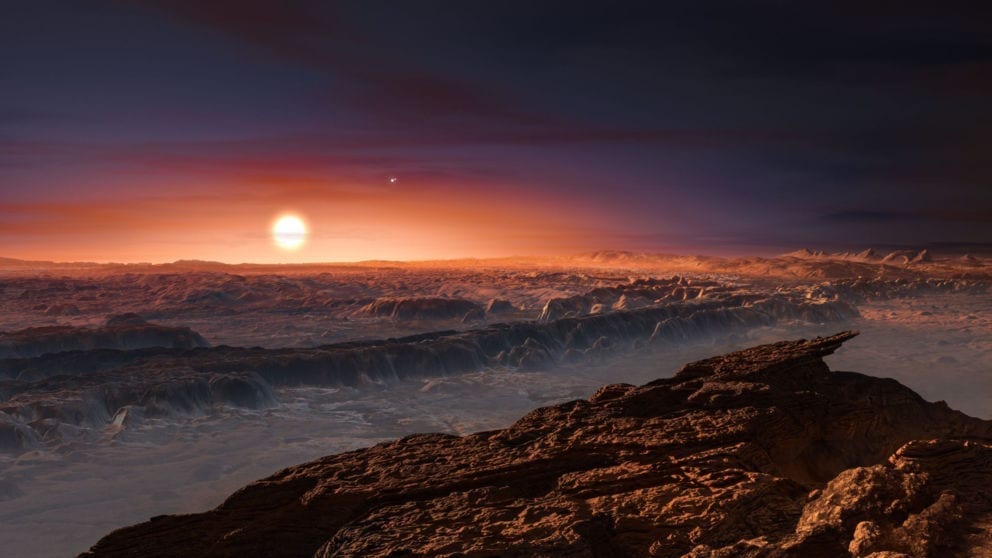 Why is this a particularly exciting discovery?

This is exciting because we are talking about the nearest star to the Sun, and we got lucky finding one that has a planet with some Earth-like characteristics. Being so close offers a number of follow-up opportunities including search for transits and reflected light, plus direct imaging in the next decade using giant telescopes. Some people think that with a well designed instrument we could also detect molecules so we have a chance of searching first evidence for biological activity (given the presence of certain combinations of gases).

How did you discover Proxima b? You knew about this planet back in 2013. Why did it take this long to confirm its existence?

We first found evidence of signals in Proxima b back in 2012 when re-analyzing public and archival data from two instruments (HARPS and UVES). What we did with my colleague Mikko Tuomi was apply new data-analysis techniques that enabled combining the two instruments plus applied some refined measurement methods on HARPS data to extract higher precision. The signals were not fully convincing, so we got more data in the next couple years.

Is there evidence that Proxima b has a similar climate to earth? Is there a real possibility of life being found here?

We have no clue. There is a chance of being similar, but similar in astronomical scales can still mean very different. Mars is similar to Earth for example but we cannot live there. The story of the star and its interaction with a putative atmosphere of the planet has been very different from Earth’s one. For one thing, the planet is closer to the star than Earth is. This means that it is most likely tidally locked with one face permanently facing the star and the other side in permanent darkness. Also being so close to the star, Proxima b receives quite more high energy radiation than Earth receives from the Sun. this possibly had strong effects on the long term chemical evolution of the atmosphere.

A great deal has been said in the media about how the planet is only 4.2 light years away from earth. Is this really a short distance or not? When is it realistic that we might be able explore this planet’s surface?

It is as short as it comes in terms of astronomical distances, but it is still a huge distance in human terms. With current technology it would take more than 10, 000 years to send a probe there. There are new concepts being studied that in principle could send micro-probes attached to light sails within a few decades, but these are only ‘concepts’ at this point.

How much involvement have you had with the Starshot project?

We didn’t have any prior contact with the Breakthrough foundation. We have some contacts now as it is on our common interest to find and learn from this planets. I am not sure Starshot is feasible, but certainly seems like the more promising concept to explore.

What is the next step? What are you working on at the moment?

Several things as results often branch into several venues. We are now looking for the transits, but chances of that to happen are slim. We should know the answer to this within a few months. We are also planning to extend similar campaigns to Proxima (more planets might be still hiding) and other nearby stars. We still don’t have the telescope time. The recent Proxima campaign was a demonstration experiment as well. We hope the telescope allocation committees will be a bit more sympathetic than in the past. We are also working on some of the instrumentation projects that should enable direct imaging, spectroscopy and characterization for Proxima b and many others.