In the unlikeliest of collaborations, three of art’s biggest names: Jeff Koons, Marina Abramovic and Olafur Eliasson have come together to explore one of the world’s most exciting new mediums, virtual reality. The trio has launched a new project based around the technology at Sweden’s leadership summit Brilliant Minds. The union was announced on stage at the event, with all three in a panel amongst a lot of fanfare. 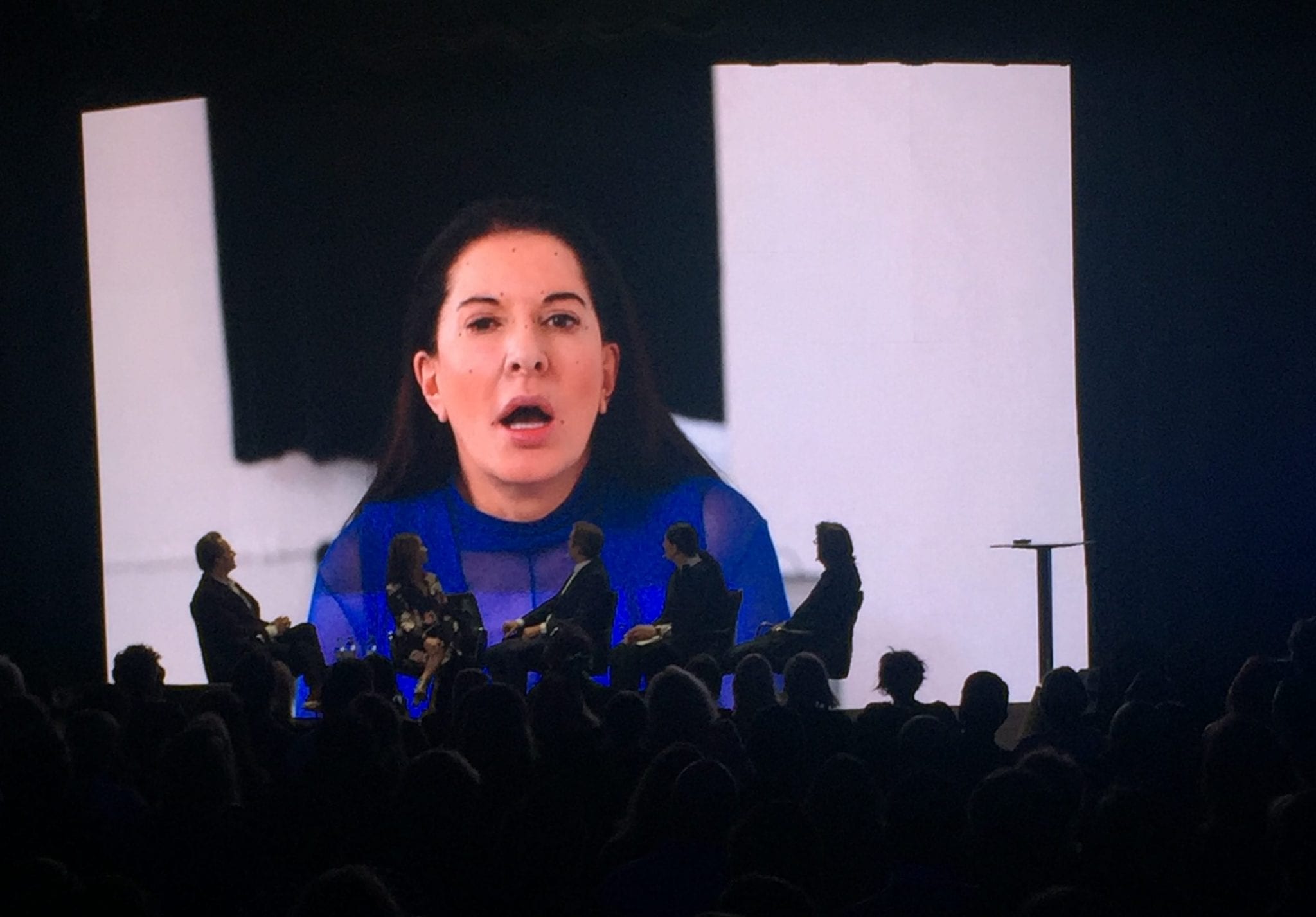 Whilst the verdict is still out on the technology, everyone from artists to businesses, industries and even healthcare are experimenting with it to see how far they can take it. This is a technology that has incredible potential but has a lot of people on edge, a technology which seems at its very nascent stages, virtual reality seems a way off until it becomes a ubiquitous toy in our culture. However this is about works being in progress, three highly renowned artists who have managed to get their hands on these toys well before mainstream art has, tinkering with an architecture that has the ability to inspire and terrorise at the same time. A microcosm of the future if you will.

We were invited to come and preview the separate works created by each of the three artists at the event. All three created with help by new technology company based out of London called Acute Art VR which bill themselves as “the world’s first Virtual Reality arts platform.”

Each piece having their own distinct form, what was most engaging was to see how each artist used the platform to try and craft their own world, shaped by their own thoughts and fears. The intensity is overwhelming if you have never tried it – virtual reality doesn’t allow for any breathing space, just total cognitive manipulation.

Starting with Jeff’s piece, based on his 45-foot tall public art exhibition and inflatable nylon sculpture Phyrne, it depicts a seated ballerina hunched over looking sombre.  Immediately you’re transported to a creepy world of perfection, delicate sounds, butterflies, bright rich colours and a certain utopian eeriness. If Jeff Koons could live in his own world, this would be it.

In Olafur Eliasson’s piece Rainbow,  based on his 1993 work Beauty, the Icelandic artist takes us into his highly ephemeral world of light and colour. Moving in and out of these fragile rainbows that he has created, his attempt to overwhelm you with these subtle experiences works perfectly, although the rain itself can be a little 2-D at times.

Marina Abramovic remains the most politically active of all three, but that’s no surprise. In Rising, Marina Abramovic uses virtual reality to confront viewers with the climate crisis engulfing us offline. As you come face to face with the artist in the VR space, Abramovic’s avatar beckons you from within a glass tank, slowly filling with water from the waist to her neck. When you make contact, you are transported along with Abramovic to the heart of melting glacial ice caps. This is where VR goes into unknown territory. A place where if you are not careful, virtual reality has the ability to create terror, more than there needs to be already in the world. Art has the ability to move you into action, but this art feels different, as if a subtle shift in reality has started.  Like a new technology, which hasn’t been totally serviced yet, is to be unleashed onto a world with nefarious intentions. Check out David Cronenberg’s 1999 film Existenz for a dystopian glimpse based on this technology into the future. This distress stayed with me throughout all three pieces. The discussion around virtual reality feels like it hasn’t been expanded in public. As virtual reality has experienced misfires throughout the 20th century, it now looks as if it has started to pick up real pace. Mainly because of the advanced technology and believability. This is a technology that should be treated with extreme caution. This is what I wanted to ask all three artists:


[Olafur] There are similar discussions going on in a lot of places, like with drones and other new technologies. I worked on my project a lot with my own kids, who are 11 and 13 years old, and the first thing they said is ‘could we go in together?’. I think the industry is so fast at responding to the collective desires that I think that very soon, personally I would like to see in my work, that it could be 2 or 3 people going in together and then I need to work out how to see the other person.

At first, I was afraid of it being a sort of escapism and I could see how the probable success of the sex industry could drive this escapism. But on the other side I think one of the drivers is what we have in common with this acute art, which is what is the ethical and moral compass of culture and how can we contribute to it from where we stand? So I guess VR as a machine will be both things but by introducing another set of values, if you want to call it that, can be counter-effective in this dystopia.

I think it is a bit like a question of progress, like the decentralisation and rupture of economies – is it good or bad?

[Jeff] I like to think of it as being good. People already have all these choices and precedents on how you choose to conduct your life, what images you want to look at, what activities you want to participate in, whether you want to be moral or criminal or whatever. People make these choices every day of their life and this is within a world of technology but it’s the decisions we make in our everyday world. And it comes down to the content, just as artists we can choose to make work that emphasise one type of energy or another, we make these decisions every day. [Marina] I think it’s extremely dangerous, more dangerous than we even imagine. If you just think of the kid going on his computer all day long, like in Japan they are never without their computer anymore, and it causes problems like they stop eating because they are just so focused on the machine. Can you imagine virtual reality? And now especially that we have this augmented reality where you can see reality and VR together, so what makes that worse than VR is that your brain thinks that what you are seeing is actually real. And then you start living in this non-real world, which is a great escape from reality. But there is this story of the little girl who they thought had disappeared for 2 years and then they found her in this video game shop where she had been playing games non-stop for 2 years, even sleeping there and taking showers in the bathroom. She was addicted to it.

But then you have the positive side. I saw this footage of a soldier in Afghanistan, whose organs had been badly burned by chemicals in the war so he was in a huge amount of pain, and no morphine or painkillers could relieve it. So when he was put in a VR space he actually believed that his organs were made of ice and it was the only time that he was not able to feel the pain. That’s incredible, so there are huge possibilities in medicine and science to use virtual reality in this way.

But what about the rest of us? We as human beings are so addictive with everything, I mean look at phones. There is not one person who doesn’t sit with their phones and check them 300 times a day. Kids don’t even talk anymore, they are just messaging each other so that emotional contact is removed.

It is the same with everything; it was a huge scientific advancement that led to nuclear warfare. So we have to think how we use this progress and what is our consciousness? We are doing pretty badly with this planet, I’m really not very optimistic about our future as human beings.

So Acute AR is the company that brought you three together here at Brilliant Minds, but who was the first to start their VR project? Do you all know each other from before?

[Marina] Yes we have known each other for a very long time. [Olafur] I think secretly there is also a significant group of other people asked, so we are just the preview or the experiment and there is a whole army of other artists right behind us. [Marina] But also you could not get 3 more different people in one room than this in a lot of ways.

Do you know about this syndrome called phantom limb? It hints at the fact that we don’t even have bodies, that we have a VR of sorts within our own body.

[Marina] Yes and this is exactly what I was thinking about. [Olafur] I think we are all in the same boat, and this feeling of being connected is a very physical thing and the disconnectedness is the lack of physical thing. The media is not easily visible as it becomes less and less physical – having a paper was at least some kind of motion with the flipping of the pages, it was like architecture in a way, where you memorise the narrative differently depending on how you are holding it. There is a study that proves that any type of physical posture situation in time, sense of time and activity, has an impact on learning curves and how you memorise, so kids that run around in the classroom are more likely to remember what the teacher was saying than those kids who are sitting still. And that study was done in the 1980s so nothing new at all. The body has a much more instrumental role than we realise, which is why dancing is so important. The mirror neurons make you want to dance when you see someone else doing it because just watching it activates the part of your brain that makes you dance.

The platform Acute Art VR is set to be launched to the public sometime in the future.