“It is a fire that wants to burst forth and couldn’t care less about what we’re doing up here.” says renowned German director Werner Herzog of his latest cinematic offering Into The Inferno. It sees the prolific filmmaker team up with volcanologist Clive Oppenheimer to explore the way in which volcanos have effected humans civilisations, inspired myths and shaped our cultures since the dawn of our species. We sat down with leading star of the movie Clive Oppenheimer, who also co-directed the film, to find out more.

This is a fascinating documentary. Can you give us a bit of background about how this film came about?

Sure, Werner and I met on Erebus volcano 10 years ago when I was doing research there. I always marvelled at the serendipity of how we had this encounter and ended up making this film together. We kept in touch and about five years later when I finished off writing a book on big eruptions in history and prehistory, I sent him a copy with a message saying that he wasn’t done with films about volcanos and it was time to get serious. That kind of gave birth to fundraising and getting production teams involved. Ultimately we got a commission from Netflix which gave us the resources we needed to go and make a film. 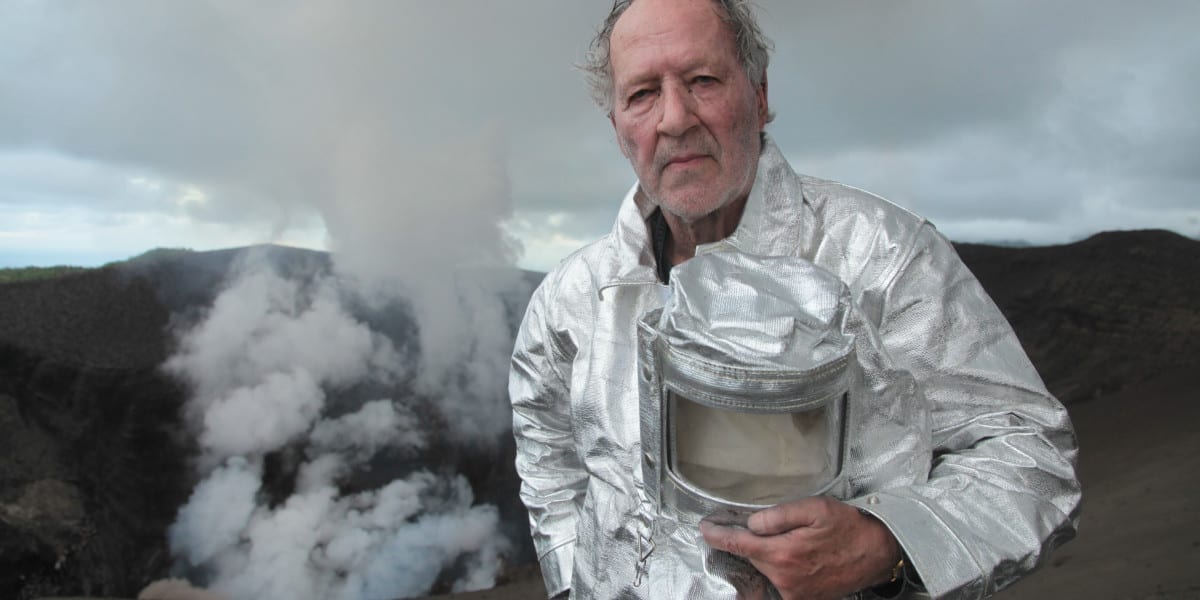 Having worked intimately with Werner, how would you describe him as a person?

He’s a wonderful person to work with and he’s at the top of his game as a filmmaker and an artist. He’s incredibly well read. That’s something that was striking to me. When we were in North Korea he was very knowledgeable about the history. He’s incredibly perceptive.

So I hope this doesn’t sound facetious, but what would you say is the point of the film?

It’s a good question. I’d been wanting to make a film about volcanos for a long time. I’d wanted to get away from the typical documentary about them, which is looking at the doom and gloom, and catastrophes, and just the science. I wanted to be much more anthropological. Many of us have a fascination with volcanos. We’re sort of in awe of them, even in the UK. We don’t live near them but whether it’s through TV or visiting Sicily or seething, we’re in awe of these things. So I wanted to delve into why that is. We have a deep connection with them through our human ancestry, our origins in the rift valley 100,000 year ago, growing up in the shadow of huge volcanos, using their resources, becoming familiar with their landscapes, fleeing from their eruptions. So I wanted to kind of explore why we carry that echo of our experiences from deep time. That’s the pint of the film really, to explore that wonder we all have with this incredible phenomenon.

It felt to me like there were two separate films in there. One that was kind of taking an anthropological understanding of cultural connections to volcanos and how they emerged, and then the another film which was more focused on the science.

That’s right. Those two do connect. As scientists we take seriously the mythologies that societies living on volcanos have developed because through legends and oral traditions we find out about eruptions that happened centuries ago that we may not have known about. So there’s real value in that. Also if we want to protect populations living on volcanos we need to be able to communicate with the people. We can’t just waltz in as scientists and say, “our seismometers tell us that you all need to leave now.” We need to understand what their belief systems are and communicate in an appropriate way. So those two aspects connect. 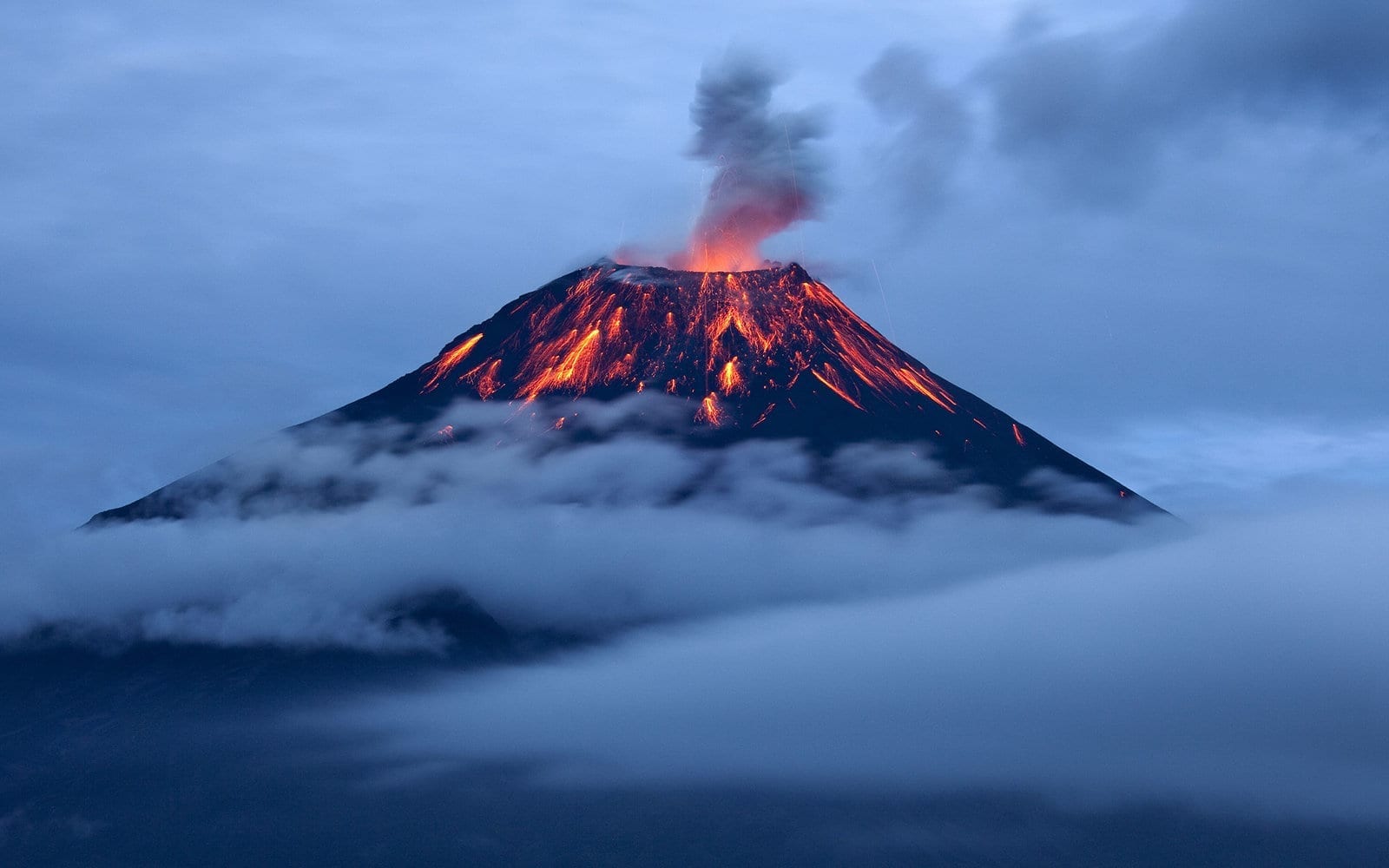 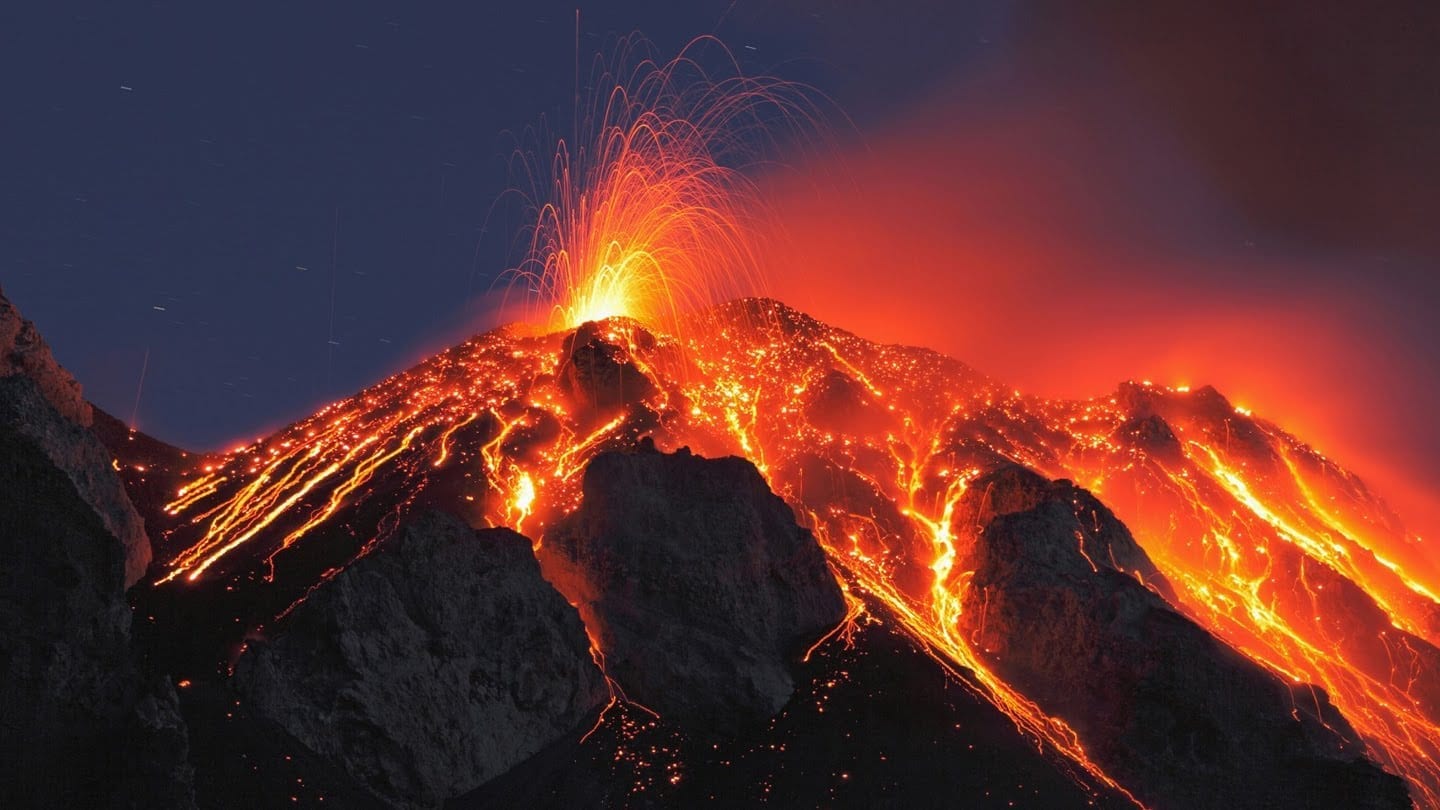 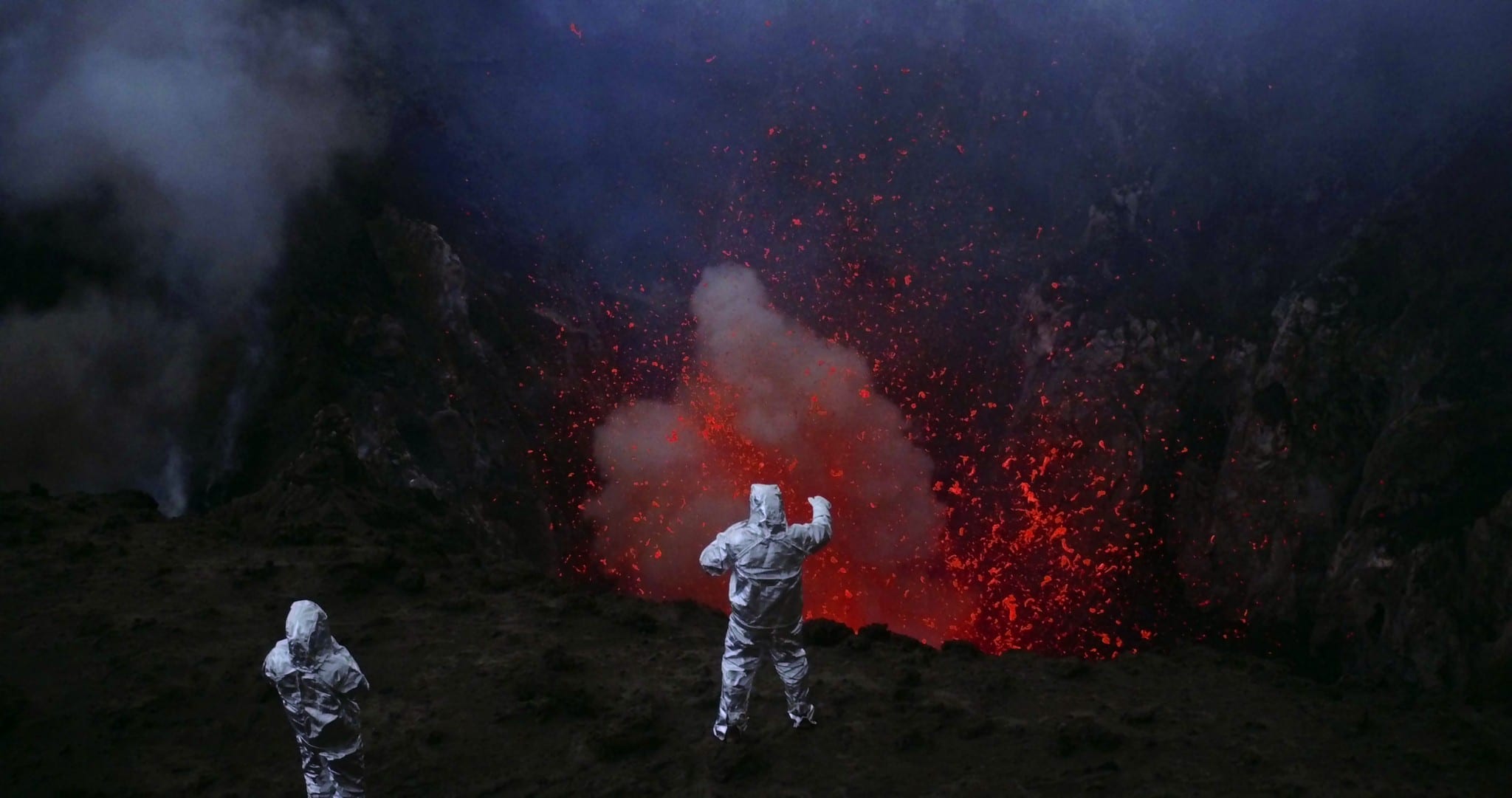 I would say that it came across a bit like you might have been patronising towards these indigenous cultures.

I’m surprised to hear you say that. The tribal elders I spoke to were so sincere that actually you almost can’t not believe their interpretations of the volcanos they live on. I was really struck in particular by one of the chiefs who describes how he goes to the volcano and looks into the crater at the boiling lava lake. He says, it’s flowing like water but it’s red so it can’t be water. What is it? The way he explains it makes perfect sense. It has an equal validity for me to the scientific explanation I can offer with the benefit of a degree in geology. We certainly didn’t set out to patronise anyone. I was really quite moved by these interviews we did. When you visit these communities at night and see the glow from the crater that’s only a kilometre away, you understand that it would be impossible not to incorporate these amazing phenomena into the way that you think. So actually I totally get these indigenous interpretations.

What purpose do volcanos play in our world today?

Volcanos are also an intricate part of the carbon cycle. They’re part of the recycling system by which the earth brings various components up to the surface, carbon, nitrogen and so on, that contributes to the hydrosphere, atmosphere and the oceans. Volcanos were probably environments that were synthesising the first organic molecules that went on to initiate life on earth. Volcanos are a bit like icebergs. Most of what’s going on is below the ground. These processes build up the earth’s crust over time, so the earth is moving in a unidirectional way to the way tectonics works. It’s interesting from that perspective if you also look at other planets and moons in the solar system, the ones that have active volcanos today and the ones that did in the past, and explain the evolution of those planets. Why did plate tectonics get going on earth? Did it ever get going on Venus or Mars? And if not why not? 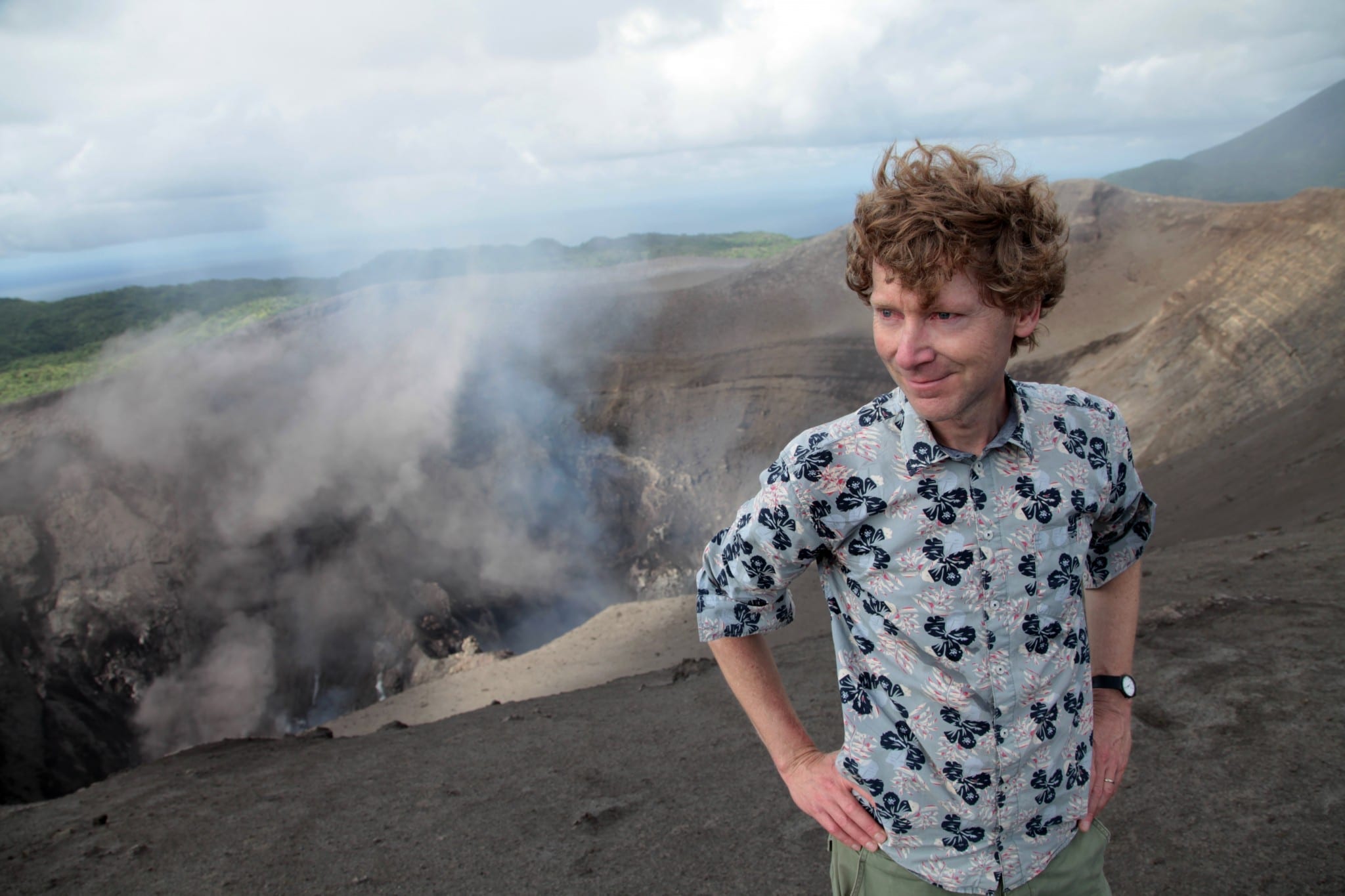 Is there anything on the horizon for volcanologists that indicate a doomsday threat on earth right now? For example something like the Yellowstone super volcano erupting?

Well one of the lessons from the last 20 – 30 years is that the biggest volcanic eruptions, and I’m thinking of Chaitén in Chile in 2008, Pinatubo in the Philippines in 1991, El Chichón in Mexico 1982, none of these were on the scientific radar. The biggest eruptions are going to tend to happen on volcanos that have been dormant for a long time, so I wouldn’t be surprised if in the future some big events happen on volcanos that we’re not looking at at all and have not been recognised as potentially active. There are certainly many parts of the world where there are a lot of volcanos that are not monitored, are poorly studied, and barely known. So in terms of the huge eruptions it’s a bit like thinking about the threat of a meteorite impact. There will be another super eruption in the future and it might not be for 100,000 years or more. It’s a very rare event and probably won’t happen in our lifetimes, but how do you offset that low probability against the massive consequences it would have? It’s a very difficult question. I think there’s plenty we don’t know and it’s worth future scientific enquiry.

Into The Inferno is released tommorow worldwide on Netflix.