What would you do with 50,000,000 million drawings made by real people on the Internet? Well, in a new study carried out by Quartz magazine, researchers analysed 119,000 unique circles drawn by people in 148 countries via the public creative database set up by Google, Quick, Draw!, to find out how different cultural backgrounds affect the way we go about drawing a circle. Who knew? 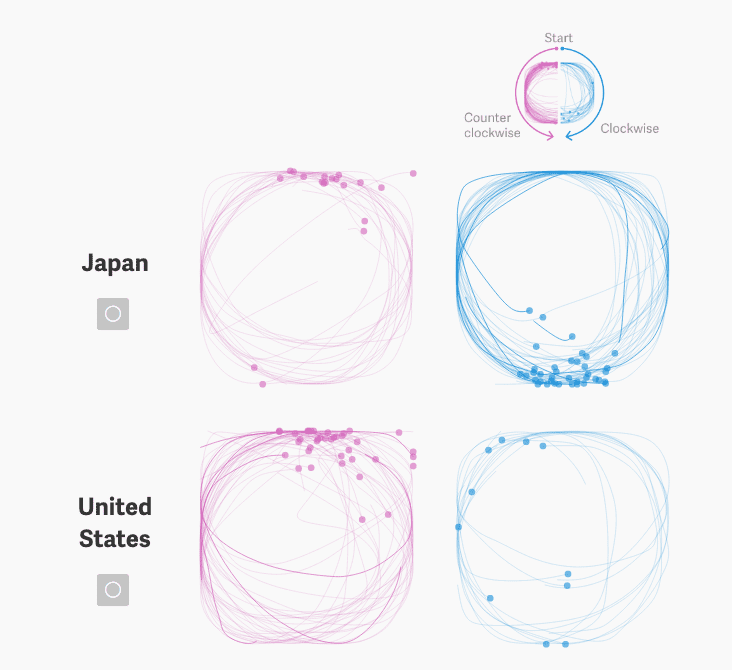 Quick Draw is a creative design database set up in order to help machines learn how to draw like humans, but such as with every type of technology, unintended consequences filter in. The research by Quartz found that of nearly 50,000 circles drawn in the U.S., 86% were drawn counter-clockwise. In fact, conclusions came to the fact that most of the world draw their circles counter-clockwise bar two Chinese-based writing cultures Japan and Taiwan, who tend to draw circles clockwise.

The circle itself is a ubiquitous part of every culture and religion around the world, making it an easy touch point to explore the subtle differences in cultural approaches.  “Americans, Western Europeans, and Latin Americans, of course, vary widely in their spoken languages but share similar scripts. Scripts from Asia and the Middle East, meanwhile, have very different sets of rules for how they’re written.”

There are anomalies such as South Korea who draw their circles counter-clockwise like the rest of the world, but that’s because their drawings are based on a different writing system called Hangul. Or the fact that Vietnam uses a Latin alphabet like the US and drew 95% of their circles counterclockwise. The study itself is full of further complex cultural observations but leaves us with the thought that perhaps the next time you see someone putting pen to paper to draw a circle, you won’t have to ask them where they’re from.