It’s a testament to Spotify, the Swedish music streaming giant, that a company who hasn’t turned a profit in ten years of operation is still alive and kicking. Remember they’re now worth a predicted £12 billion and rumoured to be preparing for an IPO. Operating on restructured debt, Spotify has 140 million users, roughly half of whom pay for their service. So they’re ‘kind of’ successful, now what?  A company who has been called the savior of the music industry and they probably are at this point needs to think about the neglected creators that allow Spotify to raise money endlessly. The 30 million+ songs on Spotify remember them? The acute number of artists who rise to the top of the royalty pie stay significantly wealthy whilst the majority around them whither.Talk about the problem of inequality in our society is rampant but what about those artists who fuel our culture that is left by the wayside. Spotify and three major labels’ best theory right now is that these artists are the rising tide that lifts all boats. Sounds pretty. The real question remains what happens to a company that has become the largest streaming service in the world but still can’t find a way to reflect their success back to the creative sector?

I admit I use Spotify I have used it since its inception. It’s a great service, one that gives me a lot of satisfaction and flexibility. Their recommendation algorithm gets smarter and smarter, giving me outstanding convenience with all my records and favourite artists in one place. I’m a music obsessive and can’t physically carry around 10,000 records on the bus, but I can with Spotify. It makes sense, a place where I can enjoy my whole library at the touch of a digital push. I have spent £10 per month since 2010 for this premium service, but as their cake grows, the artists’ share shrinks. Artists are largely beholden to the acute commercial interests that Spotify has managed to carve out on their own. They own their front page, they own their choices for playlists and front page coverage is not a democratic process. They are the judge and jury when it comes to who they want success for. Keeping that in mind it will be even harder for the majority of artists to shine through a platform that gives airtime to a very select group of artists like the ginger boy (we won’t mention his name). This minefield is far too detailed to go into here but explained very well in this think piece by Liz Pelly. Pelly reminds us so bleakly that, “Once upon a time, record labels would invest in artists’ careers. Now Spotify invests in its own ‘algorithms’.” 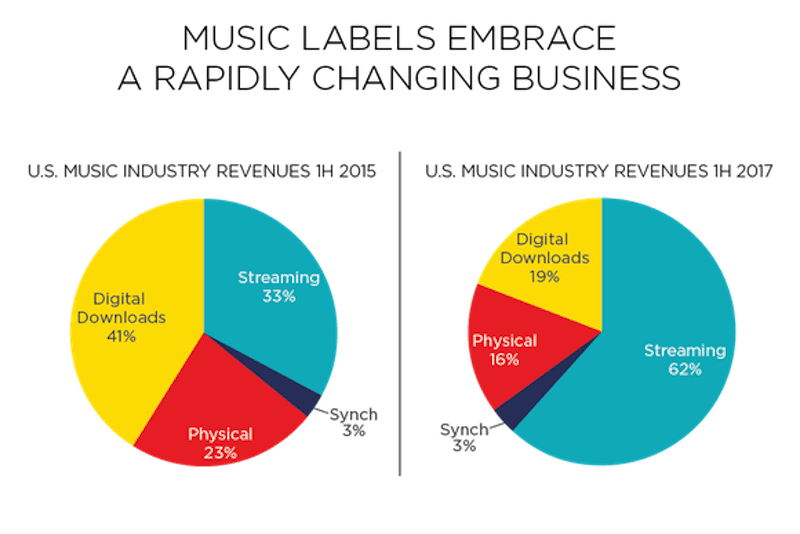 Here are the facts: Spotify pays between $0.005 to $0.008 per stream of a song. That’s bad. Real bad. If you put it into perspective based on that payout, unsigned artists need roughly 300,000 plays to receive around £1000. It’s even worse over at YouTube; songwriter Crispin Hunt, of the renowned Brit-pop band The Longpigs, recently told Wired magazine that he wrote a track for Jake Bugg which had 12 million YouTube plays. Are you ready for how much he earned for these plays? A laughable £65. This is why artists have pivoted from the recorded music industry towards the live music industry for a valve release. It earned around $30 billion for ticket sales and sponsorship in 2016, double that of recorded music revenues. Does the film business experience the same issues? No. Netflix pays their peeps, and recently said in a statement that, “its budget for obtaining new licensing deals and renewing expiring arrangements for exclusive and non-exclusive content would exceed $6 billion through 2018.” Companies hold the content and they license it out. Now there’s a novel idea for record companies and musicians.

I think its surprising that because of the music industry’s inept approach to rewarding the artist (notice how I didn’t single out Spotify), bizarre companies like Patreon have emerged, trying to fix the gaping hole that Spotify et al have left. Record companies and streaming services refuse to come to the table to increase the price per stream that artists receive. Their reasoning is that streaming price per play is not the answer; it’s the fact that people want one track streamed not owned now rather than a full album for a tenner.  Something obviously needs to change here, a new style of thinking to remedy that. Either the per stream payout to artists goes up or labels give a larger cut reflecting a new industry so that the people making the music can continue to create. Or what if Spotify puts up the price of their subscription services so everyone can enjoy the rewards equally.  Perhaps one solution could be some kind of mandatory artistic tax. Such is the importance of music in people’s lives, it’s simple. If artists aren’t getting rewarded for their content then we need to band-aid the hole until we find a better solution.  If you think about the amount of tax that companies like Apple avoid, it would make sense for them to reinvest in the creative sector. The long-term gain would be exponential.

Cast your mind back to 1999, when Napster was created by Shawn Fanning. Fanning took the most consequential step in creative history to create a platform that gives music to consumers for free, essentially collapsing the entire weight of the industry on itself. We haven’t been able to claw our way back from that era. Such is the bleak watermark that it has left on the industry.
We only have to move the needle forward 20 years to see that this could all happen again. I keep telling people it will only take one very savvy kid in his bedroom like Shawn Fanning to find out how to hijack Spotify and then allow people to distribute the programme they have so brazenly created. Spotify is still just a digital programme, so like anything else, it can be broken. Innovation is all well and dandy, in fact, I encourage it leads to solutions, equally, encouraging growth in the live industry is also fair and well. But when a grime artist, hip-hop artist or even folk artist decides this is not the life they want to lead anymore because it’s just not sustainable, then we have major problems. Remember, not everyone has the ability to become an influencer or get on a coveted Spotify playlist. We need to be realistic about this problem. It’s time for a new record.