Recently admitted to the prestigious Forbes 30 under 30 list, co-founder of Modern Electron, Max Mankin has ambitious plans. These include turning 100 years of electricity generating history on its head.

Together with his lab partner Tony Pan and a world-class team of 11 engineers and scientists, Mankin has developed a bold new idea that revolves around downsizing electric generators to the scale of small modular devices that can fit in your own house, meaning affordable cleaner energy for everyone.

There’s a whole lot of hard science in what they’re doing but we wanted to get the basics, find out Modern Electron’s plans for the future and what the big energy companies think they are a threat.

It seems like you had a very open developmental period growing up. How important was that early curious period for you?

Growing up tinkering was essential to my career. First, I learned a lot about science, electronics and how to build things – and also very quickly learned which two electrodes not to touch, or which two chemicals not to mix.

For me, the fun of technology derives from its power to solve problems that people face. Looking back, taking apart old computers and printers from the town dump to re-purpose their parts for motion sensors, Tesla coils, and repairing my family’s appliances, were my early steps toward applying science to solve problems.

Your mission is to generate cheap, modular, and reliable electricity for all. It’s an ambitious goal, to fundamentally change the way the world generates electricity. How did you come up with such an idea? And how does it work?

My co-founder Tony Pan and I took a look at how electricity is generated and asked how we could make the process more efficient. First, we took a look at the incumbent. Currently, 85% of electricity generation in the world involves burning a fuel to heat water; the resulting pressurized steam is used to rotate a steam turbine to generate electricity. Steam turbines are a magnificent result of excellent engineering, and a great example of human ingenuity.  But this current mechanical generator suffers in several ways so we thought about a technology that could take advantage of the very high temperatures produced by fuel, had no moving parts, and was more easily scalable.

We arrived at building little vacuum electricity generators that have no moving parts. The unique and exciting thing about these devices is that they can scale to almost any power level yet can maintain high efficiencies regardless of scale. One limitation of steam turbines is that they don’t scale down to small power levels efficiently.  That’s why humans build giant Gigawatt scale power plants, and then transmit electricity by wire over hundreds of miles.  The architecture of the generator that we’re pursuing is driven by different physics, so it isn’t prone to some of the same limitations at smaller scales. That being said, we’re currently still focused on building and optimizing prototypes, in order to have something truly compelling before we go to market.

Ultimately, I think this type of device will become ubiquitous given how well it scales to low power levels like those used in a home or commercial office building compared to generation for the entire grid. We live in a world that expects a constant supply of electricity, and the demand is becoming increasingly mobilized and off-grid, so this type of device has extremely broad appeal.

Lots of people talk about how new ideas can often come about when people from different fields talk to each other or take a fresh look at a challenge in a different area. I believe we’re a good example of the power of that cross-pollination. Tony and I came from somewhat unique backgrounds. I had lots of experimental chemistry, materials, and electronics experience and Tony has a deep knowledge of solid state and theoretical physics. 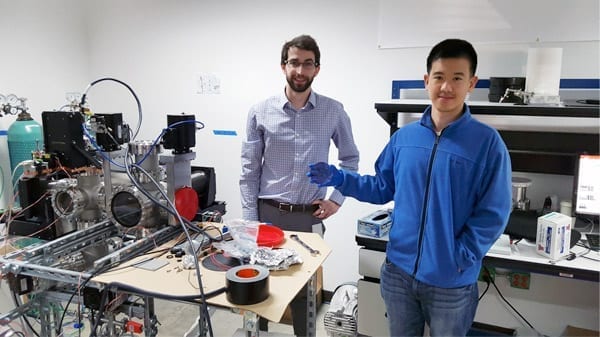 You say 85% of electricity generation in the world involves burning a fuel to heat water. Do you see a day in the near future with clean energy?

As you know, clean energy includes hydroelectric, nuclear, wind and solar power. Hydroelectric’s share of the electricity generation market is somewhat saturated. There aren’t a big number of available sites for new hydroelectric dams left. Nuclear isn’t a favorite in the current political climate, albeit we personally think it holds tremendous promise and should be part of the energy solution. Today’s discussions often center around wind and solar, which are relative newcomers to the energy market and are excellent clean technologies. But, wind and solar still only comprise about 5% of the electricity generation in the US. And electricity is just a fraction of total energy consumption. Renewable energy on the whole is about 13% of total energy in the USA, and 3/4 of that is biomass and hydroelectric.

At the moment, given the low cost of natural gas, I don’t envision fossil fuel-based electricity generation phasing out anytime soon. Our company is working hard to make extremely efficient generators that can enhance fossil-fuel, nuclear, and solar thermal power. Ultimately, increasing the efficiency of electricity generation is clean too, since we’d have to burn less fuel to get the same amount of power out from a generator.  In fact, increasing the efficiency of fossil-fueled power generation by just 1% would equal the contribution of all solar power thus far.

I’m quite hopeful over the long term, but honestly not too optimistic that we’ll transition entirely to clean energy in the next decade or so. I’d love to be proven wrong though!

I’d be interested to know what large corporate electricity plants have to say about your idea.

We think there’ll be a place for baseline power generation by large electricity plants transmitted through the grid for several decades to come. They have economies of scale, so large power plants have a significant role to play for many decades to come.
However, the world’s demand for electricity is projected to rise by 80% between 2010 and 2040. We think it’s very interesting to ponder how much of this new demand will be served by new technologies like us, and by other energy technologies and energy systems that are more distributed in nature.

What’s been the response in the market place so far?

We’re quite early stage and still focused on building and optimizing prototypes, so we’re not quite at the point of making sales. But, the response from potential partners and customers has been quite positive in several sectors of the energy market so far.