Since the guitarist, multi-instrumentalist and composer Tyondai Braxon left battles in 2010,  in a “clean break” as he describes it, he’s been riding a wave of self exploration. He’s been busy developing his own fearless form of abstract music, including his latest EP from 2016 Oranged Out.  He’s also worked with masters of the medium Philip Glass and Kronos Quartet, and played uniquely staged shows across the world.

Now Braxton is ready to embark on what is probably the biggest project ever, which he will hardly tell us anything about. Considering his wholly original approach to music, we can’t wait to see what he comes up with next.

We sat down with Braxton and began by finding out why the unknown is so integral to his world.

You’ve said that you concentrate on the mysteries, the curiosities, and the rabbit holes. You really embrace the unknown in a way that most musicians don’t.

Yeah the unknown is the thing that I search for. I feel like that is the goal in some ways, to be able to familiarise myself with something that I didn’t fully understand, whether it’s a musical idea, or a way of working, or a piece of equipment.

The music industry is built on regurgitating the same fundamentals, but you’re flipping that idea on its head by not even necessarily playing the same chords every night live. What do people want to experience when they come to see you play?

There’s always going to be an audience that just wants to hear music played the same way, or the same genre, but there’s also always been an audience for this kind of music that is more exploratory, more routed in mystery, and captivating, and unknowable. There’s always been that faction. It’s easy to get caught up in an era where we use music that’s very superficial, and cheap. At the same time there will always be a community of people who are deep listeners, and explorers into the unknown.

I just learned about this strange guy called George Antheil. He had this idea of replicating a pianola 26 times back in the 30s. I think that grand experimental mentality is great, and it’s not entertained enough these days.

Absolutely. Even in his era, which was like 30s and 40s, they had their popular music and of course he was a complete nut. There’s always been that split. As I get older I start to get more specific about what I want. I find that all I want to do these days is make the music I want to make, and listen to like-minded explorers, and I don’t consider much the crossover into the commercial world. For me that’s very minimal. There’s not too much for me there.

But you had a taste of the commercial world didn’t you?

Yeah and I can tell you this, it tasted great for a second, but then you start to ask yourself why you’re there.

Let’s talk about why you decided to leave Battles?

I haven’t really talked about it much over the years. In a lot of ways it’s a generic answer. It just wasn’t working anymore. I’d co-founded the band with the guitar player, and we’d been playing for about eight years. Our tastes started to go in different ways. . . and there were interpersonal conflicts, just like in any group when you’re spending that much time together. I’m glad to have had that experience but it made sense to leave when I did.

Do you keep in touch with them? What do they think of your music?

We don’t keep in touch. It was a clean break. That’s all I’ll say.

You’ve worked with likes of Kronos Quartet and Philip Glass. Do you feel like you’ve fulfilled a lot ambitions you had since leaving Battles?

For sure. Right now I’m working on the biggest project I’ve ever attempted to do. It’s a large orchestra piece with electronics, and a choir. It’s kind of a new zone that I haven’t explored before. That’s where all my time is right now. I’ll continue to build in my electronic music as well. There’ll always be something that I’ll seek to understand. I don’t think that will ever run out. 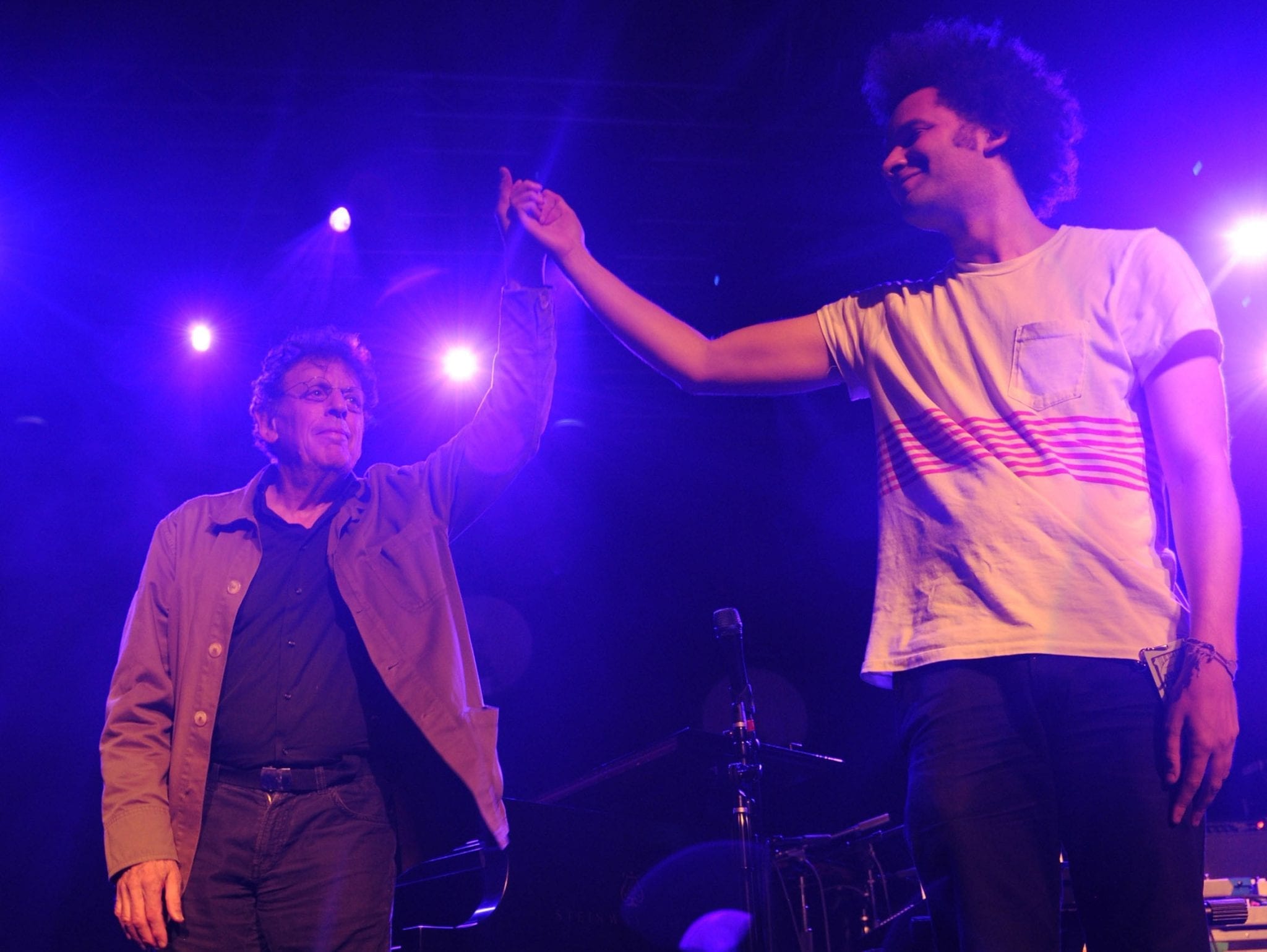 So what was the reason for the long break between Central Market in 2009 and the new album HIVE1?

Literally schedule wise, between them I was working on the Battles record. I left in 2010 and then had a series of performances for the Central Market music. I also did the duet with Philip Glass, and I was working on a bunch of commissions for other groups like Bang on a Can and Kronos Quartet. So I was creating a lot of music, but I was also trying to consider how best to proceed on this new journey of utilising electronic music and notated music together. It took me a couple of years. I think mentally I needed some time to organise my thoughts.

When HIVE1 came out what would you say was the most surprising reaction from fans?

It was a pretty severe left turn from what I had previously done, so I got a polarised reaction from people who were expecting it to be a post-battles kind of a thing or something more orchestral. It was new terrain. I had people who were really excited about it too. There was kind of a visual element to it. I had these five large wooden pods commissioned and built. We toured around with three percussionists sitting on these pods, and me and another modular synth player on the other two. That was really exciting. We did that at the Royal Opera House, and the Oval Space in London, and in Poland. It was a really exciting project. So that surprised a lot of people, and we had a really good time doing those shows.

“I had these five large wooden pods commissioned and built. We toured around with three percussionists sitting on these pods, and me and another modular synth player on the other two.”

It seems like you’re very interested by concepts. What else informs and influences you outside of music?

There is a strong visual relationship with what I do musically. I think very visually when I’m writing music. I feel like the relationship between what I do and visual art, or architecture, or film. . . one strengthens the other.

I like architects like Rem Koolhaas, Frank Gehry, Santiago Calatrava and Oscar Niemeyer. People who have a strong sense of structure, and a strong sense of space. That’s what you get with a lot of those architects. And I really appreciate a lot of painters, from Jackson Pollock to Gerhard Richter, people who explore abstraction, and are able to achieve these very organic forms. That’s something I appreciate.

You used the term ‘post-Battles’. Is that something that still hovers around you? Do people still expect to experience something that builds upon that body of work?

I think I’ve sufficiently and categorically disappointed those fans. I never say never in the sense that I won’t build upon that voice. The stuff that I did in the Central Market record was really the culmination of the voice that I was developing and using in Battles. That was the cherry on top. It’s not like I’ve left those techniques behind, but maybe they’ve been utilised in a different way, and of course I reserve the right to go back and do a project that uses that bag of tricks in a more clear way. I never say I won’t. I go where my interests take me, and it’s hard to say if where I’ve been before will inform a new project.

When you turn on the radio these days what do you think of the music you hear?

Well if we’re just talking about the radio, I actually do listen to the radio every morning, but I listen to the news, and that’s pretty scary. But if you’re asking about what I hear when I dip my finger in the pool of what’s happening in new music, I admit, I’m 38 right now and the older I get the less I know what’s happening. I don’t go out to shows as much. I’m not completely in a cave, but I’m not seeking things out as much as when I was younger.

What’s next for you?

I’m really excited to get this large orchestral piece out. That’s my focus right now. I’m excited to continue to tour, doing the electronic music. It’s been a thrill to go from a project that’s really big and ambitious, to something that’s completely by myself. Going from interfacing with a large orchestra and all the bureaucracy that’s involved, and then being able to further my own work completely self-sufficiently, doing my own electronic music. I think I’ll continue to work that way and continue to explore my music in that way. Who knows what will happen. Maybe I’ll do something that I’m totally unaware of right now.